The 2021 season is finally underway for the Solo Kart USA operation. The American brand’s racing team hit the track for the first time in 2021 at the United States Pro Kart Series opener at the Ocala Gran Prix in March. X30 Masters drivers Adam Pettit and Salvatore Sparacio had the pace on their Solo Kart SK2 chassis, just not the luck. Things finally came together at the end of the weekend with Sparacio placing ninth and Pettit in 10th, with both drivers turning lap times similar to the leaders. The next USPKS event for the team was in May at New Castle Motorsports Park, and they were again in a similar position on Saturday with Pettit ninth and Sparacio 10th. Pettit improved the following day, driving up to a fourth-place finish for his best result of the 2021 USPKS season. 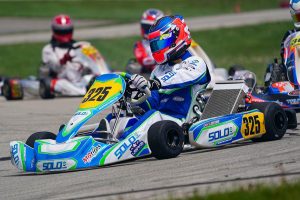 At the USPKS event in New Castle, Solo Kart factory British driver Louie Westover rejoined the squad having competed in previous events with the team prior to the 2020 season. Westover was able to test a new Solo Kart prototype chassis to aid the team in logging important data for current and future development of the chassis. It was a challenging weekend that ended on a high note. After getting pushed off the track in the Prefinal, Westover charged forward in the main event. He posted the fastest laps of the race, driving up from 38th to seventh.

“Louie has been a crucial part of the product we put on track at Solo Kart USA,” stated Adam Pettit. “We had Louie on a prototype chassis that we were testing in the early part of the weekend, and we got the data we needed from that. We switched him over to our standard SK2 chassis and he just lit up. A tire issue hurt his pace in qualifying, so he wasn’t able to show pace in that session. Unfortunately, while attacking the field in the Prefinal, Louie got tangled and ended up off track. In the end I know we proved a point with his P7 finish and fastest lap of the race. If he didn’t wreck in the Prefinal and was able to have started at least inside the top-20 for the final, we believe he would have fought for the win.  That’s an undeniable demonstration for our chassis.” 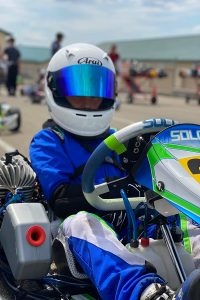 The most recent event took Solo Kart USA to the F Series Gearup Challenge event at the Pittsburgh International Race Complex. Travis Pettit ran in the Formula Cadet division, where contact took him out of Saturday’s race while fighting for the second place spot.  Sunday he was back up front again and able to take home a fourth place finish.  Jake Heavlow represented the brand in the Formula TaG class, placing fifth both days aboard his SK2.

“The SK-Mini is in its final development stages,” added Pettit. “We’ve been working on it for a couple years and happy with the progression we’ve made. We hope to have an official announcement mid-summer for the launch and availability of the Cadet frame.”

Solo Kart USA is preparing for a busy summer season. The USPKS program resumes on July 9-11 at Road America before the team travels to the GoPro Motorplex for the inaugural IAME USA Grand National Championship at the end of July. The Superkarts! USA Pro Tour SummerNationals in mid-August at New Castle follows before closing out the F Series in New Jersey. The Solo Kart USA team will also travel to Las Vegas for the SKUSA SuperNationals this December with their factory drivers competing in the X30 SR category. Head to solokartusa.com for more information and details on the full chassis line.