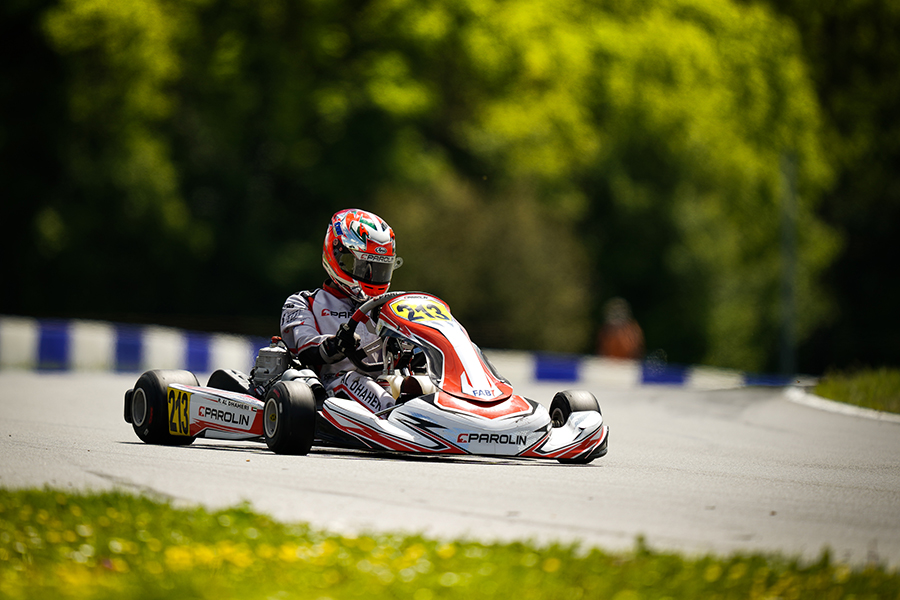 The intense work carried out by Parolin Motorsport undoubtedly showed its effectiveness in terms of performance during the second round of the FIA Karting European Championship – OK & Junior. The Junior results were very consistent for Rashid Al Dhaheri and Anatoly Khavalkin but the OK drivers did not manage to perform well in the Final.

“We have reasons to be satisfied with the Aunay-les-Bois meeting,” said Marco Parolin. “But adaptation to the unique circuit was not easy. The performance took longer to come in OK and the battle in the heats starting from quite a distance didn’t allow us to reach our objectives in the Final. The results we obtained in Junior are more convincing, even though several hazards thwarted our progress. In short, it was not an easy weekend to manage and we are delighted with the performance of Anatoly Khavalkin at the brink of the top 10. Rashid Al Dhaheri was very good, as usual, Enzo Deligny and Maksim Orlov met several obstacles on the way and were unable to defend their chances in the Final. We have further enriched our experience and we are looking forward to racing again in Sarno to strengthen our competitiveness in the third round. In the meantime we will have started the European KZ Championship in Wackersdorf, which is a very exciting challenge.”

With its unusual layout, the Aunay-les-Bois circuit presented new conditions to master both technically and in terms of driving. While the technical work progressed throughout the meeting, the harshness of the battles on the track sometimes created problems for the drivers, particularly in terms of overtaking opportunities.

Khavalkin finds his bearings in Junior

Anatoly Khavalkin, who was 22nd in Qualifying, showed himself to be solid during the heats with a 3rd and a 5th place. A penalty in the third heat delayed his progress, but he made up for it in the Final. Anatoly put in a good effort at the beginning of the race, avoided any incidents and maintained a good pace to secure 11th place with a gain of 12 places at the finish. This excellent result allowed him to gain more than 30 places in the Championship standings.

11th in Qualifying, Rashid Al Dhaheri was on the list of contenders. He was forced to restart three times due to jostling at the start from the outside lane, but managed two 2nd places and a fastest lap in the race. Despite having recovered more than 10 positions, his chances of fighting for the Final victory were compromised. Rashid started cautiously to avoid the troubles at the beginning of the Final, but he started to come back to 8th position, then he was sanctioned for one of his passes and ended up only 13th. Enzo Deligny was less comfortable than usual and a retirement in the third heat made his task more difficult. He was caught up in a collective collision at the start of the Final and did not complete a lap. Maksim Orlov and Guillaume Bouzar had several setbacks in the heats and did not reach the Final.

Jesse Alejandro Carrasquedo Parada set the fastest time for the team before losing positions in the heats. James Wharton started to make the kind of comeback he is famous for with three good heats, but he just missed out on a place in the Final after problems in his third heat. Alfio Spina was fast and consistent enough to take the start of the Final after a nice 13 position improvement in his heats. Caught in a collision shortly after the lights went out, he was unable to complete even the first lap.