Kosmic Kart In the Sign of Speed in France 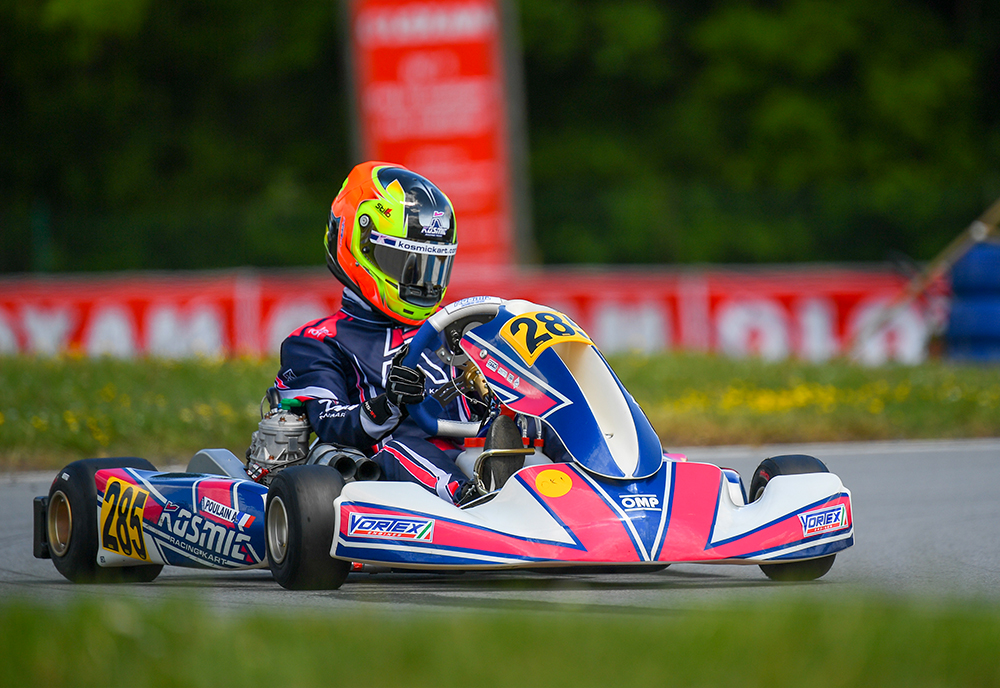 On the second round of the FIA Karting European Championship at Aunay-les-Bois, our Racing Department signs the group pole position and the fastest lap of the final reserved to the OKJ class with Poulain and Eyckmans, respectively. Coluccio, on the other hand, is among the best ten drivers of OK category.

Still good performances for our Kosmic Racing Department on the occasion of the FIA Karting European Championship. In the second round at Ouest Karting circuit, in France, our team is fast and competitive with the Kosmic Mercury R, always joined with the DST (OK) and DJT (OKJ) Vortex engines, the engine division of OTK Kart Group.

At his second event with our Racing Department, Arthur Poulain is a candidate to be one of the main protagonists of the OKJ class. On his home circuit, the French drivers signs the best timing in his qualifying group and is fourth in the collective ranking. Poulain arrives at Sunday’s final among the top ten competitors of the category, thanks to a constant rhythm in the qualifying heats where he obtains a victory and two third places. At the end of the decisive race of the weekend, Poulain finishes sixth, but is penalized by 5 seconds for a badly positioned front fairing and thus goes back to eighth place.
After finishing third in the previous round at Genk, Ean Eyckmans pays for some difficulties in the qualifying heats, but does not discourage in the eliminatory heats. At the end of the five races leading up to the final, the Belgian driver climbs as many as 30 positions and certainly does not want to stop at these results. In fact, Eyckmans makes his way also in the last race on Sunday: he climbs 9 positions thanks to a sequence of excellent laps – not by chance, he is the author of the best timing of the final – and grabs the 7th place.
Joël Bergström‘s growth continues in our sports division. The Swedish driver comes from the attendance to the two Genk finals, both in the Champions of the Future and in the FIA Karting European Championship, but in France recovering 8 positions between qualifying and eliminatory heats is not enough to get his third consecutive pass to the final. Hugo Herrouin‘s weekend is also full of obstacles despite a top 10 result in the qualifying heats.
In OKJ class, finally, it is just a Kosmic Kart to dominate the French round: Freddie Slater, with Ricky Flynn Motorsport, gets the absolute pole position in the qualifying heats, five wins out of five in the qualifying heats and the success in the final. Unfortunately, the British driver suffers a 10-second post-race penalty (due to a race misconduct at the restart after the ‘slow’ regime) which prevents him from winning. However, the English driver can remain firmly at the top of the championship.

In OK class, Luigi Coluccio continues to be our best driver in the European Championship. The Italian driver conquers three podiums in the qualifying heats and is present at the start of the final in the top 10 of the category, to end the weekend in the same position of the starting grid. Jakub Rajski steadily increases his pace during the qualifying heats but misses the final by a few positions. The same fate goes to Sebastian Gravlund, who was already looking forward to the next events on the race calendar.

A special attendance in the European round of Aunay-les-Bois: Maxime Léger, French champion of the Handikart category reserved to disabled drivers, signs an important chapter for international karting. Léger, who races with only one hand because of a disability, performs well throughout the weekend (with overtaking and battles on the track) on a Kosmic Kart chassis powered by Vortex, which delivers one third more power than the kart he is used to.

From France the team goes back to Italy: the Kosmic Racing Department will attend in two weeks, between 10th and 13th June, the second round of the WSK Euro Series on the Adria Karting Raceway.