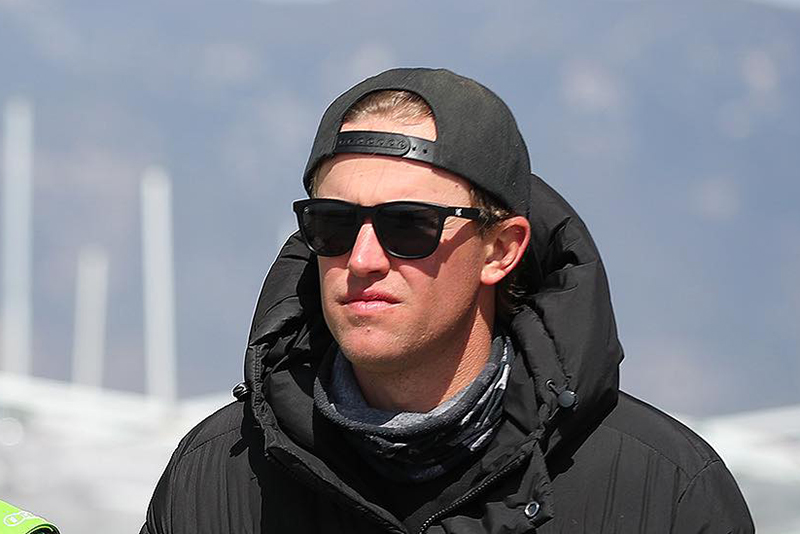 What do you think of when you see or hear the word Colorado? The Broncos, the Rockies, and skiing are probably the more common topics or phrases that are included when mentioning the ‘Centennial State’. Those new to the sport may not understand that Colorado is also a hotbed for the sport of karting. Over the last few decades, the Welch name has been involved in Colorado karting is one shape or another, and this continues today with Forward Direction Motorsports. Owned and operated by Greg Welch, FDM has helped to resurrect the sport around the Denver area and throughout the western half of the country as well.

Welch’s beginning in the sport was a family introduction. A friend of the family introduced Greg and his brother Jeff to karting, allowing them to take a kart out at a local track in the Denver area. Three months later, that same kart was under the Christmas tree in 1996. Greg’s first kart was a 1991 Coyote with a Briggs Raptor engine. For the first three years, that was his ride, which he used to learn the ropes and get educated on the sport before moving to the national level and a new class.

The top division at that time was the 60cc Novice division in a young Superkarts! USA program. It was the only Cadet category for the shifterkart-only organization. The class was run at the regional level, as it was not part of the newer SKUSA ProMoto Tour national championship. It was however included at the year-end SKUSA SuperNationals held at the Las Vegas Karting Center (X-PLEX). In 2000, Welch was one of 11 drivers to compete, and he held off two competitors in the main event to secure the victory in the third year of the class at the event.

“Karting has provided me and my family with a lot of memories. There are just too many to remember them all,” stated Welch. “Aside from the SuperNationals victory in 2000, I think my favorite period was in 2006 at the Florida Winter Tour when I won the shifter division three times. We would have won the title if we could have afforded to go to the last race!” 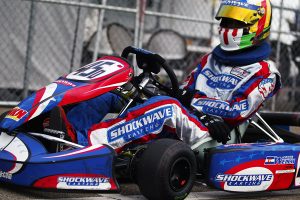 Shockwave Karting was an established brand and chassis for over a decade (Photo: EKN)

Greg continued for several years as a driver and within the industry as their family business ventured into the karting market. His father Doug Welch owned and operated a general manufacturing company. As the Welch family dove deep into the sport of karting, Doug began manufacturing components for karts. Their first products were axles and hubs in 1998. In 2000, when Jeff Welch was creating a website for their products, the name Shockwave Karting was established. A few years later, they began looking into branding their own chassis. Working with six-time world champion Mike Wilson, Shockwave began distributing their own chassis line from Cadet to full-size karts. IndyCar’s Santino Ferrucci, Road to Indy and IndyCar owner Ricardo Juncos, five-time Rotax Grand Nationals champion Nick Neri, Cody Humphries and others utilized the chassis for Cadet and up to a full-size model. Eventually, they moved to Coyote Motorsports to manufacture the frames until about 2009. Shockwave was a strong industry member during its time, eventually shutting down by 2011 after Doug moved into retirement.

With Shockwave shutting down, Greg was at a transition point in his life at the age of 23. Karting continued for him, but in a different way as he was hired by Unser Karting, a Denver-area indoor facility. The first part of the year was spent behind the counter or in the shop working on the karts. His experience and knowledge led to the development of the Unser Karting race team, based out of the indoor location. That was a five-year long program until Unser Karting took over the lease at the facility formerly known as The Track at Centennial, one of the major outdoor karting circuits in Colorado at that time. Welch was the perfect fit as track manager, as he oversaw everything that happened at the Centennial, Colorado facility; from the rental kart program, managing employees, hosting corporate events, maintaining the shop, including the race team that continued. The track’s focus was on the corporate party side with a sales and management team booking events from the indoor facility offices.

“I nearly stepped away from Unser Karting before they took over The Track. I felt like this was a rare opportunity to manage my own track. I wanted to run my own business, so I put that aside to be manager at the race track. After a few years out there, it was not going as I hoped so I thought now is the time to go my own direction. Four months after I left, the track was closed. I did not see it coming. I put my shop half a mile from the facility.” 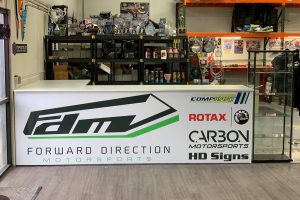 When Welch eventually left Unser Karting, he established his own shop: Forward Direction Motorsports. It began out of a storage unit that Welch outgrew in a week. An off-road truck team was also in the same facility, and Greg joined forces with them to move in together on a larger building of their own. The location is roughly one mile from the Centennial Airport where The Track was located.

The building is 7,000 square feet, with the front third of the space set up as a true retail / brick and mortar kart shop. FDM welcomes new and existing karters through their doors, providing a full-service location for those in the Denver area. Customers have the choice of new or used karts and packages. Engines include the popular Briggs 206, IAME, and FDM is a full Rotax Service Center. Their full roster of karts and parts are available on site, or through their online store at www.fdmkarting.com. Behind the retail section is a full-service shop, along with a row of fabrication machines to make one-off parts, welding, and other products.

“We wanted to build a hub for everything involving karting, for anyone that needs something done, service any brand, any engine. My week is filled with mounting seats, doing front-end alignments, running the chassis table and providing anything racers need in the area. The online store has been increasing by the week. When we first launched, it was a few shipments here and there. Now, we’ve grown to multiple shipments per week, sending product all over the country.” 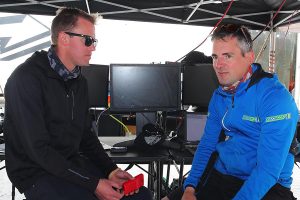 FDM and Welch work directly with CompKart to provide the best trackside service for their customers at the local, regional and national level (Photo: CKN)

One of the focused products for FDM is the CompKart chassis line. Launched in 2014 by USA-based J3 Competition, the chassis line has found success early and quickly, not only here in the United States but throughout North America, South America, Europe and Australia.

“When we were dealing with OTK products at Unser, we dealt directly with J3 Competition. From the business side and personally, I really enjoy working with J3. After a few years of their development of the CompKart brand and our launch of FDM, it was a win-win to bring on the chassis line to customers here in Colorado and the west coast. I find it helpful that the developers of the chassis line are right here in the USA, going to the races and can provide personal support to us and our customers. If you call J3, you get one of the three owners answer the phone. You are not talking to a guy that packs boxes.”

The combination of FDM and CompKart provide for one of the top west-coast based race teams in karting today. Team FDM offers trackside support for CompKart drivers in addition to arrive-and-drive and transport for team drivers at local, regional and national events. Forward Direction Motorsports travels to Challenge of the Americas during the winter time, competing against top talent in the ROK Cup USA program. At home, FDM is a big supporter for the Colorado Karting Tour. The series races eight times in 2021 at five different facilities throughout the Rocky Mountain state. Charlie Craig and McKenna Carey play a big part not only at the shop, but also helping with the team and drivers trackside on the weekends. 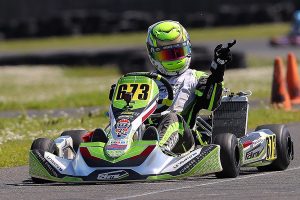 Adam Kasick is among the many drivers to win under the FDM banner (Photo: EKN)

FDM’s national schedule for the 2021 season began with Challenge of the Americas program on the west coast, scoring podium and victories in Micro ROK, Mini ROK, Masters 100cc, Junior 100cc, Masters ROK and Shifter ROK. The team just returned from the SKUSA Pro Tour SpringNationals in Utah with a first-time podium finish for Lucas Palacio in Micro Swift. The team is heading east to the United States Pro Kart Series event at Road America in July, and south to the Texas Sprint Racing Series in September. They will support the new Rotax Trophy Series West with events in Colorado and Phoenix. The year will close out with the ROK Vegas event in November, the 4-Cycle Super Showdown in Phoenix and the SKUSA SuperNationals.

Greg Welch has built Forward Direction Motorsports into one of the newest brick and mortar kart shops, servicing the state of Colorado and growing to a top team in the western half of the United States. Find them at their location in Centennial, Colorado, call them at 720-323-3650 or visit fdmkarting.com for more information and their full online store.