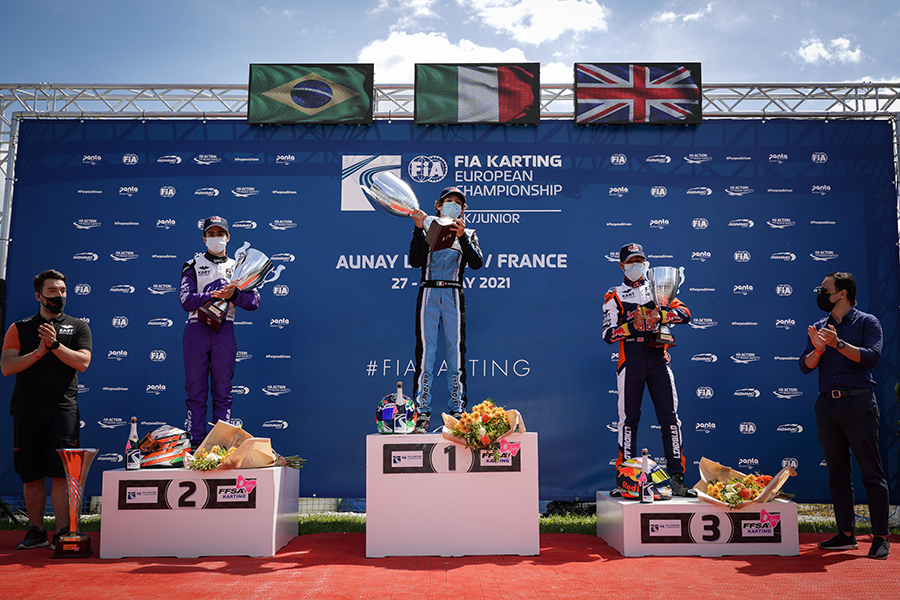 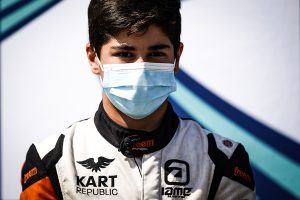 At the end of an exciting weekend of racing in France, Matheus Ferreira (BRA) in OK-Junior and Andrea Kimi Antonelli (ITA) in OK were the winners of the Event, giving the FIA Karting European Championship – OK & Junior a very interesting twist.

As noted by CIK-FIA President Felipe Massa, the Races at Aunay-les-Bois were hotly contested between the top specialists, while the entry for the second Event of the season was high despite the still noticeable presence of the pandemic in some countries. This is a very encouraging sign for the rest of the FIA Karting season.

The quality of the French organisation was again greatly appreciated, a point to the credit of the K61 team and its president Claude Gripon. The technical difficulties of the Aunay-les-Bois track made a drastic selection among the participants and the few incidents that occurred during the weekend were often caused by a poor appreciation of its unique points. The MG Tires slicks fulfilled their mission perfectly during a Competition that was run entirely in the dry.

As the mid-season mark has just been passed, the hierarchy is being established in the provisional standings with two new winners in a wide open title hunt. The next meeting will take place in Italy on the Sarno track in six weeks time, before the conclusion at the end of July in Spain at Zuera.

The last Qualifying Heats on Sunday morning saw the intensity of the confrontations go up a notch, particularly in the Junior category where several spins played a significant role in the results. The excitement of the young Drivers as the Final Phase approached sometimes caused them to lose their lucidity.

After a well-controlled race, Slater crossed the finish line more than eight tenths ahead, but was given a 10″ penalty for not respecting the rules when the race was restarted after the ‘slow’ procedure during the first three laps. Kirill Kutskov (RUS-KR/IAME/MG) had been in second place for a long time, but his KR Motorsport team-mate Matheus Ferreira (BRA-KR/IAME/MG) overtook him on the way to the finish and became the official winner of the Final. Tomass Stolcermanis (LVA-Energy/TM Racing/MG) found himself in third place after a convincing performance throughout the weekend. Maksmilian Popov (RUS-Tony Kart/Vortex/MG) and Alex Powell made up the top five.

Provisional FIA Karting European Championship – Junior standings after the second round at Aunay-les-Bois:

OK: Antonelli wins, Camara consolidates his lead in the Championship 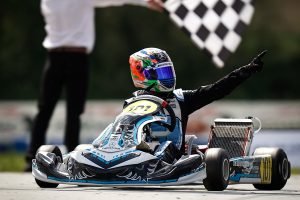 Winner of all four heats, Andrea Kimi Antonelli (ITA-KR/IAME/MG) was ahead of Artem Severiukhin (RUS-Tony Kart/Vortex/MG) and Rafael Camara (BRA-KR/IAME/MG) on the starting grid for the Final. Antonelli progressively broke away from Camara and took an impressive victory with a lead of more than 4,5”. It was another KR Motorsport Driver, Arvid Lindblad (GBR-KR/IAME/MG), who caused a sensation by moving up from 8th to 3rd place in the Brazilian’s wheel tracks, setting the fastest lap of the race. Artem Severiukhin had to be satisfied with fourth position whereas Yannick De Brabander (BEL-Praga/IAME/MG) at 30 years old achieved a remarkable performance in the top five for his return to high level racing that had started in Genk. Evan Giltaire (FRA-KR/IAME/MG) lost some ground, but finished in a convincing 8th position as top French Driver.

The exemplary performance of Maxime Léger (FRA-Kosmic/Vortex/MG) caught everyone’s attention: it was the first time that a disabled driver has taken part in an FIA Karting European Championship Event. Maxime completed a courageous challenge by finishing 52nd in the OK Qualifying Heats after setting the 60th time in Practice.

Provisional FIA Karting European Championship – Junior standings after the second round at Aunay-les-Bois:

Victory for Lavaux in the International Handikart Trophy 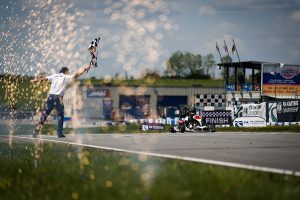 Organised by the K61 club under the aegis of the French ASN FFSA, the fourth edition of the International Handikart Trophy was very well integrated into the FIA Karting Competition. The CIK-FIA President handed out their medals to the 13 participants on the starting grid of the Final. Morgan Lavaux (FRA-Sodi/Rotax-H1) dominated the Qualifying Heats and the Prefinal before winning the Final. Joan Lascorz-Moreno (ESP-CRG/Iame-H3) was a formidable opponent, but was disqualified from the Final due to insufficient weight following a water leak. Mickaël Vaché (FRA-Sodi/Rotax-H2) took second place ahead of Alain Nicolle (FRA-Sodi/Rotax-H2).

FIA Karting shares the sadness of the motorbike racing world after the death of the young Swiss hopeful Jason Dupasquier as a result of his injuries during the Qualifying session of the Italian Grand Prix at Mugello. Jason was a 19 year old MOTO 3 rider.

The results of the Aunay-les-Bois race can be viewed on the official FIA Karting Championship app for mobile devices and on the website www.fiakarting.com.

The same six drivers with ties to North America that competed in Belgium were in France for the second round of the European Championship. As stated above, Jamaican Alex Powell (KR Motorsport) won an OK Junior heat race after qualifying fifth overall. Results of top-three or better in the five heat races placed him on the outside of the front row for the main event. He would slip back to the fifth position by the end. American James Egozi (Tony Kart Racing Team) went the opposite direction. Starting 17th, Egozi improved 11 spots to end up sixth and holds the ninth spot in the championship standings. USA driver Kai Sorensen (Forza Racing) – 2021 SKUSA Winter Series champion – had his best performance to date, starting 11th and ending up ninth for his first points of the season. Two-time Challenge of the Americas champion Enzo Deligny (FRA-Parolin Motorsport) was the fourth driver in the final, unfortunately, was unable to complete a lap after starting 31st. Xander Reed (KR Motorsport) was unable to qualify for the main event, ending up 66th after the heat races.

Last year’s OK Junior champion Ugo Ugochukwu (KR Motorsport) was among the top contenders all weekend long. After qualifying 14th in OK, Ugo was able to string four top-seven finishes, including a win in the heat races to move up to seventh for the starting grid in the Final. Ugo ran as high as fifth, but ended up in the seventh spot at the checkered flag.