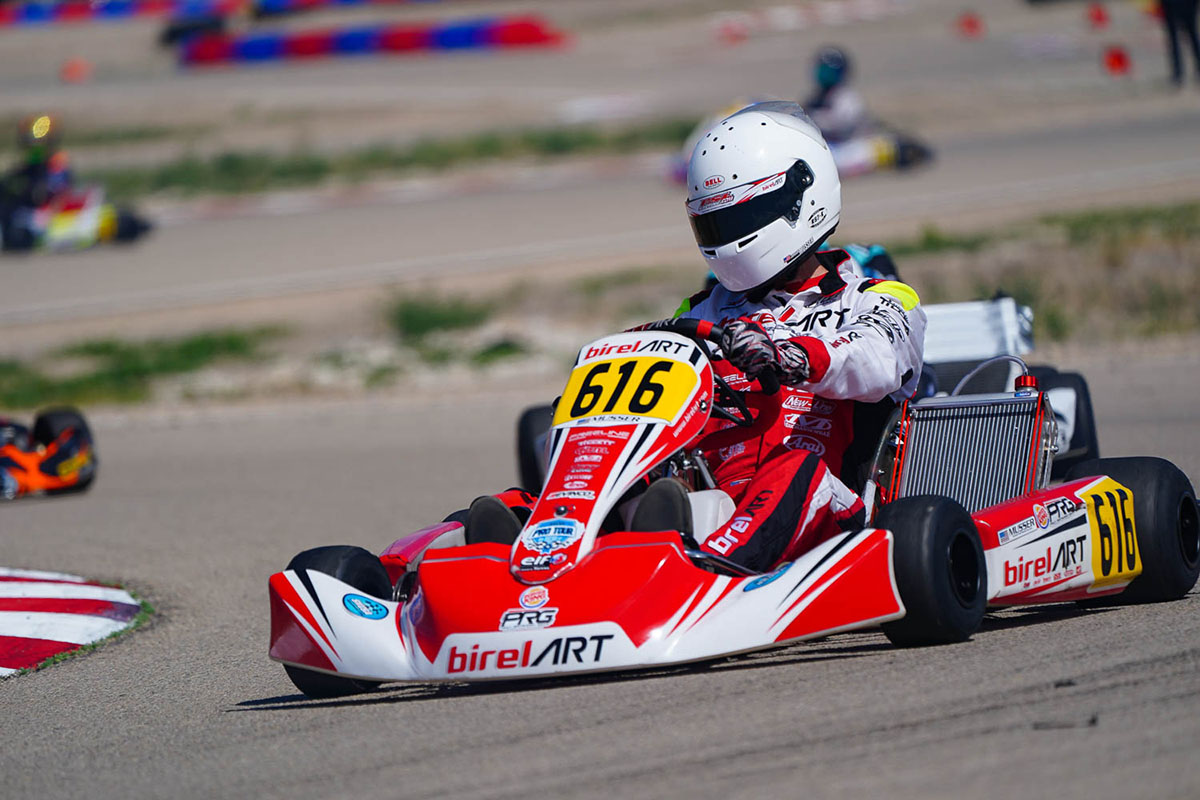 “The fields at SKUSA competiton continue to be some of the best in the country and to score multiple wins and podiums is a true testament to our team, dealers and products,” expressed Dominic Labrecque. “We can’t wait for the next one.”

The strongest results of the weekend once again came from the gearbox powered classes as the Birel ART chassis proves to be one of the best for that engine platform. Competing in the Master Shifter class, Jordon Musser and Ben Schermerhorn earned podium results in round three with Musser topping the podium blocks and his teammate joining him in third. Musser returned Sunday to sweep the day’s on track action taking the pole position, prefinal win and main event victory to double up on the weekend as Schermerhorn joined him on the podium in second to make it a Birel ART one – two finish after qualifying in the fourth position.

In the Pro Shifter category, it was Jake French who would lead the way with a pair of runner-up results. Improving from both his third and fourth place qualifying efforts to finish second, French was one of two Birel ART North America drivers in the top-ten with Michael Stevens who earned a seventh place result on Saturday.

Jess Peterson added a win for the Red Army taking the top step of the blocks on Saturday, improving from his third place qualifying effort and returned Sunday to score his second podium finish of the weekend. Dante Yu added a podium result in X30 Senior driving forward from tenth in round three to finish third as he edged his Birel ART North America teammate Thomas Nepveu who cross the line in fourth after qualifying 11th.

United States Pro Kart Series winner Caleb Gafrarar threw his name into the mix in X30 Junior with fourth and seventh place results. Leading laps in Saturday’s main event, the rookie junior competitor just missed the final step of the podium but has shown the pace needed to be at the front of the field. Fellow Junior driver Jesus Vasquez Jr. competed in the KA100 Junior class and ran inside the top-ten throughout the event weekend. With fourth and ninth place qualifying efforts, Vasquez earned an eighth place finish in Sunday’s main event, securing another top-ten finish for the squad. Mini Swift driver Ryan Gianneta qualified second but ran into some bad racing luck when the wheel-to-wheel action commenced.

Labrecque continued, “Thank you again to our drivers, their families and our awesome dealer network.”

For more information to become part of the BirelART, Ricciardo, Charles Leclerc or TM Racing dealer networks or information on how to join the PSL Karting / Birel ART North America Race Team for the 2021 season, please contact Dominic@PSLKarting.com