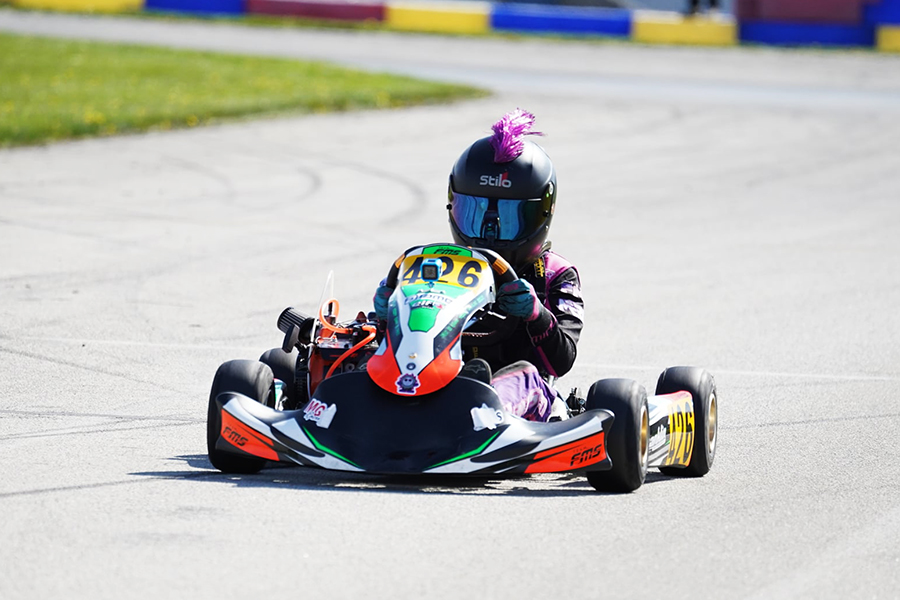 One of the longest tenured regional programs in the United States is the Route 66 Sprint Series. Based in the Midwest, the series has nearly reached the two-decade mark, helping to bridge the gap between club and national racing. The series is welcoming return to grassroots engine platforms with the Briggs & Stratton 206 engine as a focal point over the last few years. A total of 42 drivers took part in the Sportsman, Junior and Senior divisions at the series opener at the New Castle Motorsports Park on April 17-18. Coming away with the win in Sportsman both days was Ava Hanssen. 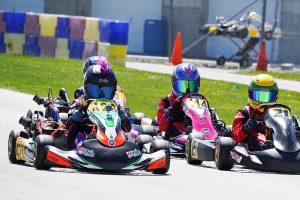 A photo finish on Sunday to complete the main event sweep on the weekend, earning her third straight in class dating back to the series finale in October 2020 (Photo: Alissa Grim Photography)

Briggs 206 Sportsman was the second largest class of the weekend at 21 drivers. CKNA Grand Nationals winner Aryton Grim was the driver to set the tone in qualifying for Round One on Saturday, clearing the field by four tenths of a second. Sitting fourth was Hanssen. In the nine-lap Prefinal, Hanssen was able to move forward and led on lap five. A total of five lead changed took place in the race, with Hanssen getting shuffled back to sixth late with Grim taking the win. Hanssen fought ahead once again in the Final, up to third on the opening lap. She bought her time to work into second and then battle Grim for the top spot. In the closing laps, the two exchanged the top spot multiple times all while gapping the rest of the field. The race came down to the final few corners, with the two making contact. Grim got the worse of it, ending the race in the grass, while Hanssen muscled through to reach the checkered flag for victory.

Sunday brought on Round Two, and a new name at the top of the order after qualifying with Landon Buher on top. Hanssen found herself in the fifth position during the timed session. She drove up to third quickly as Grim and Buher ran away with the top two positions. The Final was another exciting finish, this time with multiple drivers in the hunt. Grim and Hanssen were among the leaders of the race for all 12 laps, each taking a turn. Hanssen was able to secure the top spot and hold it to the checkered flag by 67 thousandths ahead of Grim with Sarah Bradley and Buher all crossing the line within two tenths. The victory, two on the weekend, extended Hanssen’s streak to three dating back to the series final at Mid-State Kart Club in October 2020.

Hanssen ran double duty on the weekend, competing in the Mini Swift category as well. After placing sixth in the Final on Saturday, Ava improved to fourth on Sunday to take home three trophies from four main events. Hanssen takes a 69-point lead in the Briggs 206 Sportsman championship chase to the second event of 2021, set for June 26-27 at the CTECH Manufacturing Motorplex at Road America in Elkhart Lake, WI.

Before that, Hanssen will join many racers in the Midwest taking part in the inaugural KA100-206 Sprint Nationals at the Motorsports Country Club of Cincinnati in Batavia, Ohio on June 4-6. Ava will continue racing the remainder of the Route 66 and United States Pro Kart Series programs along with competing at the SKUSA Pro Tour SummerNationals at New Castle in August. 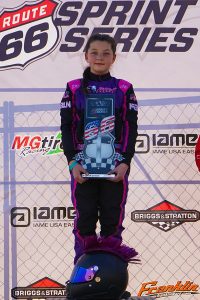 Chassis: Merlin
Engine/Engine Builder: Mini Swift (Woltjer Racing Engines) & Briggs 206 (GT Machine)
Sponsors: DNJ Intermodal, GTS Sports Performance, Franklin Motorsports, and Precision Karting Technologies
Series You Compete In: Route 66, USPKS, WKA and SKUSA
Years Karting: 6
How did you get started in karting? When I was 4 years old, I started racing snowmobiles and I loved it. When the weather got warmer my parents took me to a go-kart track in Broadhead Wisconsin (Sugar River Raceway) to watch. I instantly wanted to try it, so my parents bought me a kid kart and entered me into my first race and I was hooked.
What has been the high point in your racing career? The high point in my racing career was when I finished 2nd at the SKUSA Supernationals in Las Vegas in 2019 in the Micro Swift class.
What are your goals in racing? My goals in racing are to continue to learn/improve and seize every opportunity available to me.
In a few words, how would you describe your driving style? Cool and calculated
Funniest moment at the race track? The funniest moment at the track was when a stray dog ran out towards me while we were out for practice at Michiana Raceway Park.

What do you do when not at the track? I work out twice a week at GTS Performance and Fitness, play the piano and saxophone, paint/draw, play video games and spend time with my family, 3 dogs and 2 cats.
What are your goals outside of karting? To continue to do well in school and be a good friend to everyone.
What app or game do you play right now? I play NBA 2K20 and enjoy making Tik Toks
What type of street car would you like to drive? I would LOVE to drive a Ferrari Laferrari
What are your pet peeves or things that irritate you? Unkind people and impatient drivers who cause wrecks on the first lap.
What do you think could be done to improve the sport of karting? Bringing back and promoting the kid kart class more in regional and national series as they are the foundation of karting. Those were some of my best memories in karting.
What are your favorite aspects about the sport of karting? The confidence boosts and the friendships you make at the track.