Speed and Show for Tony Kart at European Genk Championship 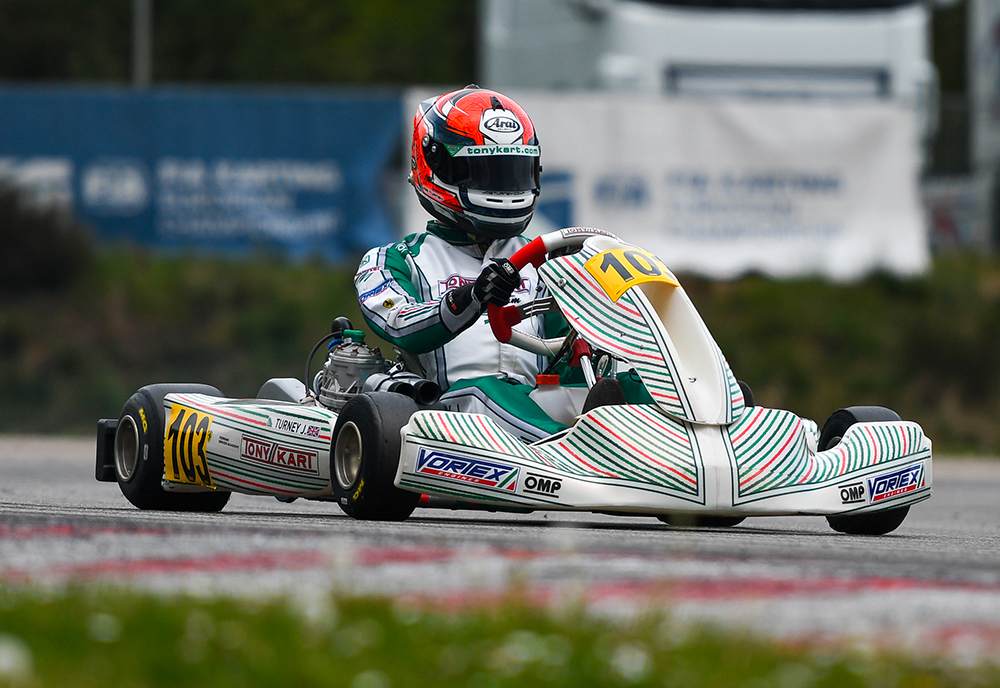 On the Belgian circuit, our Racing Team attends the first round of the FIA Karting European Championship 2021. In OK and OKJ categories our drivers are able to show great performances in any step of the race.

There is a pinch of regret inside our Tony Kart Racing after the opening round of the FIA Karting European Championship. In Belgium, on the Karting Genk circuit, our drivers show on the track top level performances during the whole weekend and in the finals on Sunday. But this is not enough to get a place on the podium, both in the OK and in the OKJ classes with the Tony Kart Racer 401R chassis and the Vortex DST and Vortex DJT engines, due to unlucky circumstances.

After the 2nd and 3rd places gained two weeks ago on the occasion of the Champions of the Future, Tuukka Taponen and Joseph Turney are at the starting grid in Genk with high expectations for Sunday’s final, confirmed by their good performances in the Friday’s qualifying heats. Unfortunately, the bad weather on Saturday shuffles the cards on the table and, despite a 6th position gained by the Finnish driver and a second position (plus the fastest lap) of the British driver in the last qualifying heat on Sunday morning, our two drivers take the last positions of the final grid. But this is not enough to bring down Joseph Turney who in the 23 laps of the race performs a spectacular comeback of 19 positions, combined with the second fastest lap in the race (only 10 thousandths slower than the record). The English driver finishes in sixth place, while Taponen, who follows his teammate with a 16-position comeback, reaches the thirteenth position.

Due to a disqualification at the end of the third qualifying heat due to a misunderstanding on the part of the driver concerning a signal from the race direction, Bruno Del Pino can not attend the Sunday race. It’s a pity, especially since in both the Saturday’s qualifying heats and races he shows to have the necessary rhythm to do well.

In OKJ class, it’s Harley Keeble who takes the highest place in the final for our Racing Team. The British driver brings home consistent results in the top 10 in the qualifying heats and improves by 10 positions his place in the general ranking. In the final, Keeble recovers more positions than the starting grid and is among the best five drivers at the end of the 19 laps of the race. James Egozi is also a good interpreter of the Belgian track of Genk. The American driver is always close to the top 5 during the qualifying heats and ends the path to the final with a third place as best result, fully in the top 10 of the overall ranking. Some collisions don’t allow Egozi to improve in the final but, nevertheless, he is able to finish in the top 15.

Also Alexander Gubenko and Jan Przyrowski enter the Sunday’s final. Both our drivers climb several positions (+32 for the Russian, author also of a second place, +6 instead for the Polish rookie with a fast lap in his booty) in the ranking, despite the unlucky qualifying heats, especially for the Russian driver. Just enough to have the access the Sunday final.

Once the two Genk events of the last weeks are over, the Tony Kart Racing Team will move to the near France: in fact, from 27th to 30th May, the second round of the FIA Karting European Championship will take place at the International Circuit of Aunay-les-Bois, once more for the OK and OKJ categories.