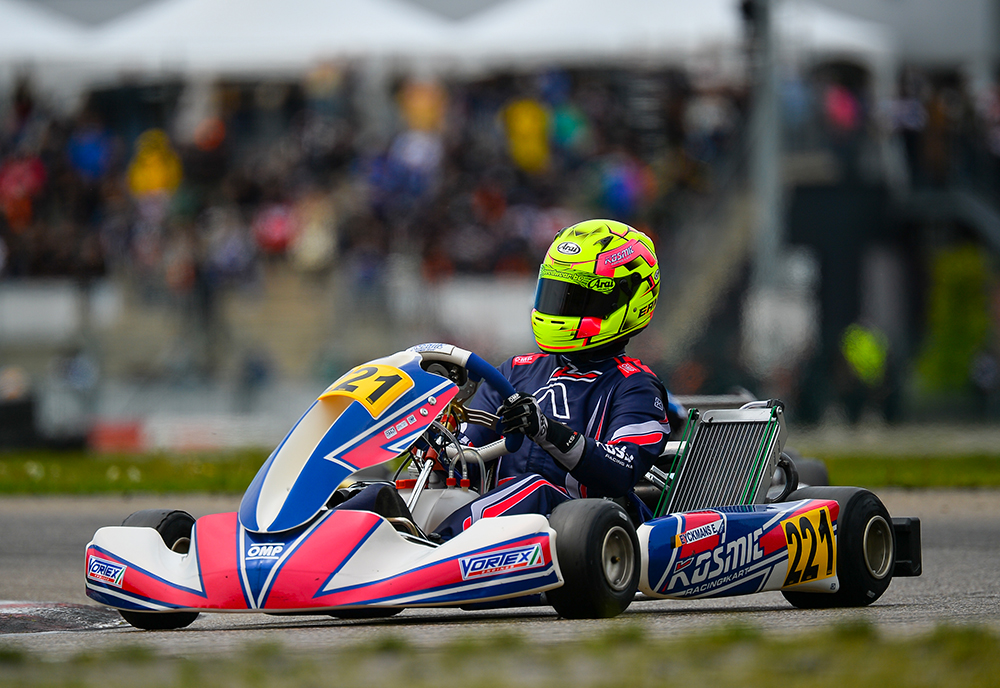 On the occasion of the first round of the FIA Karting European Championship reserved for the OK and OKJ classes, our Racing Department obtains a third place in the “Junior” category with Ean Eyckmans. In the same class, a chassis of ours wins with Freddie Slater.

Genk smiles once again to Kosmic Kart. On the occasion of the first round of the FIA Karting European Championship, our Racing Department proves to be fast and competitive in the OKJ class with the Kosmic Mercury R chassis, equipped as usual with the DJT Vortex engine. A bit of bad luck doesn’t give our kart, this time powered by the Vortex DST engine, the same level of the results gained in OK.

Fighting for the victory in the final of the OKJ class is our driver Ean Eyckmans. After having preferred to rest for some physical problems instead of attending the Champions of the Future two weeks ago, the Belgian driver gives his best on his home circuit and becomes one of the pretenders to the victory: four wins, a second place and two fast laps out of five races launch him directly towards the first place at the end of the qualifying heat, thus getting the pole position for the final. In the final race, Eyckmans loses a couple of positions, battles for the podium and finishes third with our colors.

Joël Bergström, at his second attendance with the Racing Department, enters the final thanks to some good performances and a fast lap in the qualifying heat, but he doesn’t take part in the decisive Sunday race. Arthur Poulain hits the final in his first event with our team, recovers several positions and also scores a fast lap in the qualifying heats: positive results in view of the next appointments. A few stops and some penalties prevent Hugo Herrouin’s run towards the final.

Another victory in the final for Freddie Slater in Genk with our Kosmic Kart – Vortex material. The Ricky Flynn Motorsport’s driver repeats his success of two weeks ago on the occasion of the Champions of the Future still leading the OKJ final.

Unlucky weekend for our drivers in the OK class. Luigi Coluccio obtains two top 5 positions and a third place in the four qualifying heats, results that allow him to enter the final among the best ten of the category. However, also because of the incorrect position of the fairing at the end of the race, the Italian driver lose good position in the ranking. Sebastian Gravlund recovers 23 positions between the qualifying and the eliminatory heats, but has to stop in the final. Jakub Rajski gets no timing in the qualifying, a result which jeopardizes his entire performance during the weekend.

In two weeks time, between 27th and 30th May, the Kosmic Racing Department will run the second round of the FIA Karting European Championship, valid for OK and OKJ classes, at the International Circuit of Aunay-les-Bois.