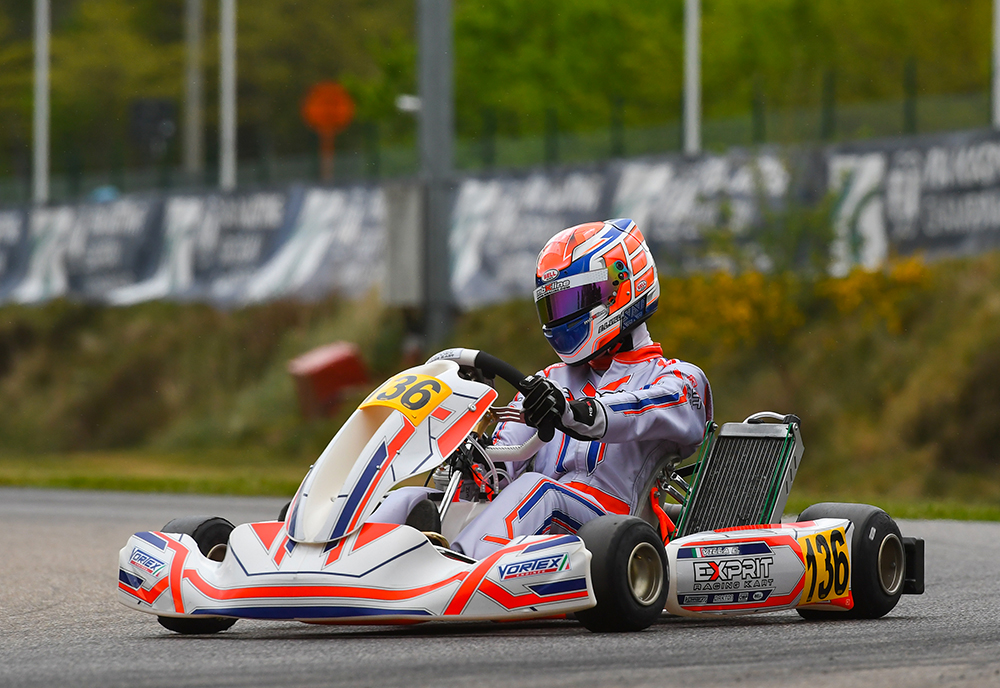 At the circuit of Genk, Edoardo Villa gains a third position in OK class on the occasion of the FIA Karting European Championship, with the official colours of our team.

At its second year of activity in international karting, but with the long technical and sporting experience of OTK Kart Group behind it, Exprit Racing Team conquers its first podium in the FIA Karting European Championship. On the Belgian circuit of Genk, our Exprit Noesis R chassis – powered by the DST engine by Vortex – wins the third place in the OK class. Four are instead the official chassis, still Exprit Noesis R, but powered by the Vortex DJT, at the starting grid of the OKJ class.

Two weeks ago, on the same Belgian track and on the occasion of the Champions of the Future, Edoardo Villa had obtained important performances in the OK class in view of the European round. So, the Italian driver does not disappoint the expectations this weekend: after a not so lucky qualifying session, he takes advantage of the rain on Saturday to recover gaining four top 10 positions in the qualifying heats, with a third place as best result to frame his winning path. With a recovery of not less than 40 positions between qualifying and eliminatory heats, Villa jumps from the ninth place on the starting grid of the final – run, instead, on a dry track – and going on in a continuous fight with his rivals who were competing for a place on the podium, he is able to perform an incredible comeback, taking home a third place in his second race with our team.

In OKJ, on the contrary, luck is not on the side of our drivers. Reno Francot comes back to Genk after a positive performance, at his debut with our colors, on the occasion of the Champions of the Future, but two stops – losing his sixth place as best result – in the qualifying heats, leave the French driver with his mouth dry. Also, a stop and a penalty prevent Oscar Wurz to run towards the final. An improvement in the general ranking between eliminatory heats and qualifying heats is not enough for Alvar Siimesvaara to move on to the final, as well as the unceasing good results for Benjamin Sylvestersson: actually, the two Finnish drivers will know how to recover in the next events.

After the long trip to Belgium, the Exprit Racing Team moves to France to attend the second round reserved for the OK and OKJ classes of the FIA Karting European Championship, scheduled on the International Circuit of Aunay-les-Bois (27th – 30th May).