FIA Karting European Championship: First Wins of the Season for Slater and Camara 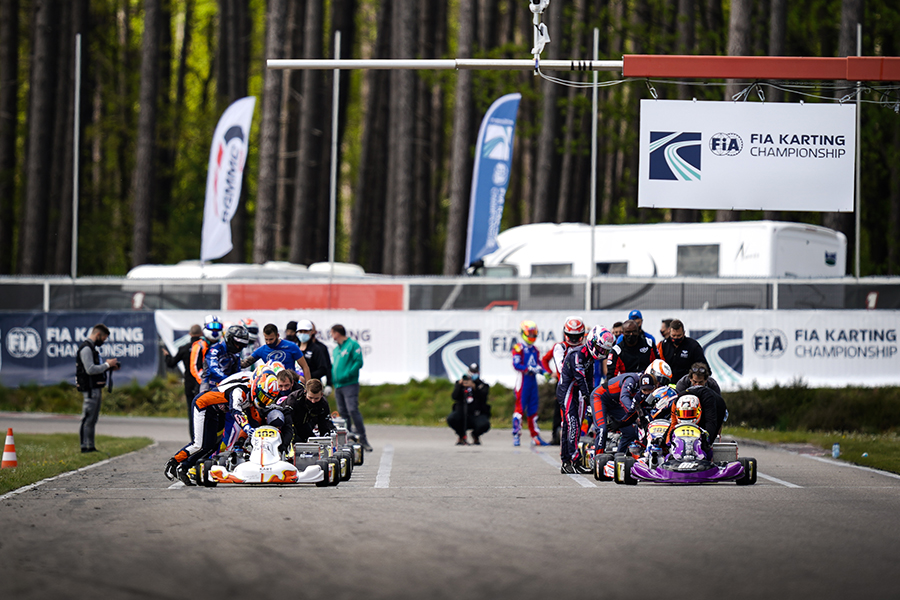 The first Event of the 2021 FIA Karting European Championship – OK & Junior offered a thrilling spectacle from start to finish at the Horensbergdam circuit in Belgium. The intermittent rain of the previous day was replaced by good weather for the Final stages, which rewarded Freddie Slater (GBR) in Junior and Rafael Camara (BRA) in OK.

The competition was formidable from 13th to 16th May in Genk, where the track is famous for its selectivity. The weather added an extra difficulty on Saturday with several brief showers. Fortunately, the sun took over on Sunday and the Finals were held on a completely dry track. The battles were superb at all levels and the show was exciting right to the end.

With its high attendance and very high standard of competitiveness, the 2021 FIA Karting European Championship – OK & Junior got off to a very good start. The MG Tires tyres fulfilled their mission well while the very professional organisation of the Event enhanced the image of international karting. The second event will take place in a fortnight in France on the Aunay-les-Bois circuit. 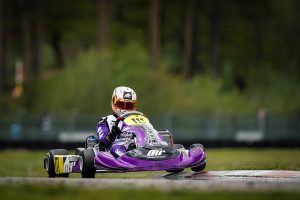 The last two Qualifying Heats held on Sunday morning in dry conditions did not change the ranking. Arvid Lindblad (GBR-KR/IAME/MG) confirmed his domination by adding a fourth victory to his score while Rafael Camara (BRA-KR/IAME/MG) was his closest rival ahead of Juho Valtanen (FIN-KR/TM Racing/MG), Ariel Elkin (ISR-KR/IAME/MG) and Andrey Zhinov (RUS-Tony Kart/Vortex/MG).

Valtanen and Camara attacked Lindblad on the third lap of the Final. Camara took the lead two laps later, while Lindblad regained second. The Briton had realised early on that he would not be able to catch the Brazilian on a regular basis and that he had to secure second place. The battle was raging among their opponents. Edoardo Ludovico Villa (ITA-Exprit/Vortex/MG) and Martinius Stenshorne (NOR-Birel ART/TM Racing/MG) made their presence felt, but it was Nikola Tsolov (BGR-KR/IAME/MG) who managed to catch up with the leaders. Lindblad let himself be passed and Tsolov managed to finish in the wheel tracks of the undisputed winner Camara. However, the Bulgarian hopeful dropped back to 5th place following a penalty for an incorrectly positioned front fairing and Lindblad took the second step of the podium, followed by Villa, while Camara triumphed. The performances of the other top ten Drivers, who were delayed in various ways over the weekend, suggest that the rest of the Championship will be a battle.

Provisional FIA Karting European Championship – OK standings after the first round in Genk: 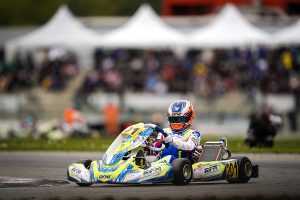 On Sunday morning, three Qualifying Heats remained to be contested in the Junior class on a dry track. Ean Eyckmans (BEL-Kosmic/Vortex/MG), Freddie Slater (GBR-Kosmic/Vortex/MG) and Akshay Bohra (SGP-KR/IAME/MG) were the respective winners and ended up in that order in the Heat rankings.

Slater, the reigning FIA Karting World Junior Champion, was slightly delayed at the start of the Final, but he soon took first place on the fourth lap. He increased the gap as the laps went by and took a very nice victory, almost 2.5″ ahead of Bohra, while Eyckmans secured 3rd position against Alex Powell (JAM-KR/IAME/MG) and Harley Keeble (GBR-Tony Kart/Vortex/MG), three Drivers who had recovered well. The first half of the race was very lively with frequent overtaking at all levels and a few incidents. Few penalties were applied, which contrasted with the bubbling behaviour of the Juniors in the previous stages.

Provisional FIA Karting European Championship – Junior standings after the first round in Genk:

Find the complete results of the Genk Competition on the official FIA Karting Championship app for iOS and Android mobile devices and on the website www.fiakarting.com. 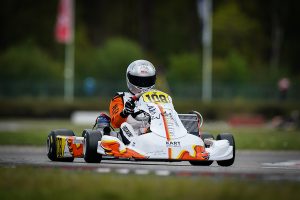 A total of five drivers with ties to the USA competed in the OKJ division to open up the FIA Karting European Championship in Genk. Of those five, four made the main event. They were led by Jamaican Alex Powell (KR Motorsport). Powell was top five in four of the five heat races, starting the main event in ninth and driving to fourth in the main event. Challenge of the Americas champion Enzo Deligny (FRA) was top-five in three of the five heats to start in 17th for the Final. Deligny (Parolin Motorsport) improved eight spots to end up ninth. The top USA driver was James Egozi (Tony Kart Racing Team), who was the top driver after the heat races in P8 with five top-six finishes. Egozi slipped to 13th in the main event. Completing the USA roster in the Final is Kai Sorensen, making his debut with Forza Racing. Sorensen started the main event in 33rd, improving 12 positions to 21st. Xander Reed (KR Motorsport) was the third USA driver competing, suffering a tough weekend in Genk. Reed was unable to qualify for the main event.

2020 FIA Karting OKJ European Champion Ugo Ugochukwu (KR Motorsport) qualified first to begin his rookie OK campaign. A spin in wet weather for his third heat race hurt his results, dropping him down to 13th on the grid for the main event. Ugo advanced up to eighth at one point in the Final, ending up in 10th at the checkered flag.