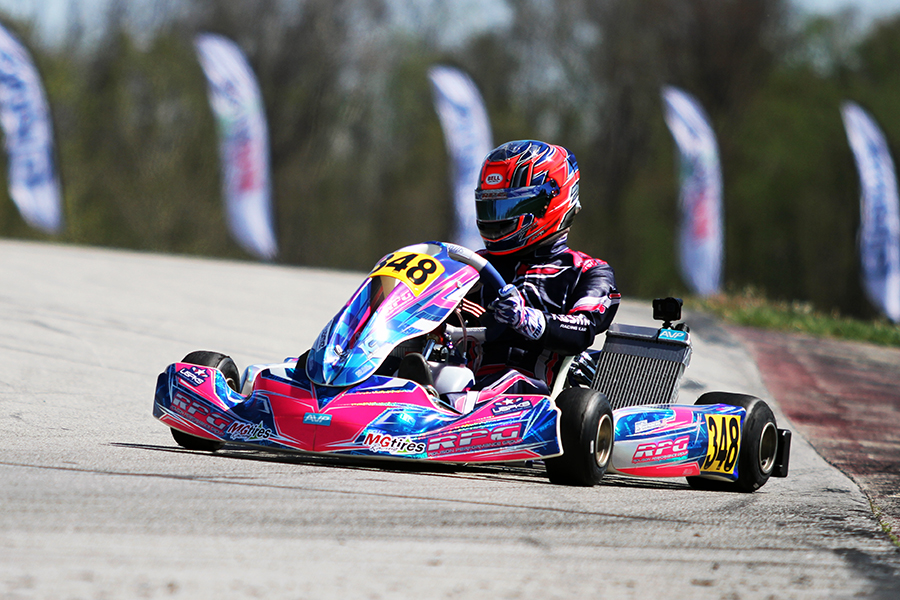 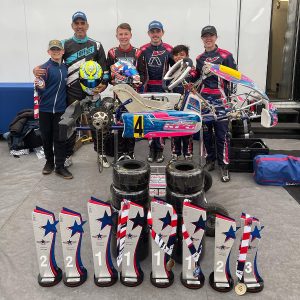 Another successful weekend for the Rolison Performance Group operation as the OTK USA race team contested the United States Pro Kart Series Heartland Grand Prix on the April 30-May 2 weekend. RPG was able to gather a total of four victories and eight podium results, in addition to five top-qualifier awards at the New Castle Motorsports Park in New Castle, Indiana for Rounds Three and Four of the championship series.

Brazilian Augustus Toniolo put in his best performance of the 2021 season with a complete sweep of the Micro Swift category. Toniolo put his RPG Kosmic into the P1 position each session, including qualifying, Prefinal and Final on both days. In each Prefinal and Final, Toniolo showed the way for in wire-to-wire wins for a total of 48 laps led on the weekend. Joining him in the category was Oregon driver Jackson Gibson. After slipping back in the Prefinal on Saturday, Gibson improved from 25th to 16th for his best result of the series thus far. Jackson was set on improving on that finish in Sunday’s main event, until last lap contact dropped him down to 26th.

A total of five drivers under the RPG tent piloted Kosmic machines in the X30 Pro division. They were led by four-time SKUSA Pro Tour champion Ryan Norberg. Saturday was his best performance of the 2021 season, sweeping the action in Round Three. A tough battle all day long saw Norberg edge out the competition in both the Prefinal and Final, earning his first USPKS victory since 2015. Norberg attempted for another sweep on Sunday, setting fast time in qualifying. He was shuffled back to third in the Prefinal but came away with a runner-up finish in the Final. The two main event results gave him the overall win on the weekend, cashing in for a $5,000 payday.

Hannah Greenemeier was up front all weekend long as well in the X30 Pro class. After qualifying 13th on Saturday, she fought her way forward through the Prefinal and Final, and was the top challenger to Norberg for the main event victory. She was just 85 thousandths short at the line, placing second. The fight continued Sunday, this time with Hannah clocking in the fourth quickest lap in qualifying aboard her RPG Kosmic. She remained in the top-five through the Prefinal and drove to a second straight podium finish in the third spot. Those finishes gave her the third step on the money podium, taking home $1,250. 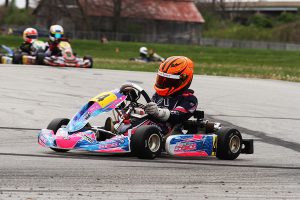 Lucas Fecury ended the weekend with his two best results of the 2021 USPKS program thus far. The Brazilian was among those in the top-15 all weekend long, placing 12th on Saturday for his best finish of 2021. He fought within the top-10 on Sunday, only to get shuffled back to 13th for two solid top-15 results. Nate Cicero was there as well, matching his best performance of 2021 on Saturday with a 13th place result. Cicero was fighting within the top-10 on Sunday, only to suffer a DNF after the halfway point. Throughout the weekend, Branyon Tiner had the speed to contend for a podium finish or a victory. Luck however was not on his side, fighting for position in the main event on Saturday Tiner was involved in a wreck that dropped him down the order, eventually finishing 21st. Sunday proved better as he was within the top-five all day. Unfortunately, a technical situation removed him from the results.

“The entire team put in a full effort prior to and during the weekend for USPKS at New Castle,” stated Rolison Performance Group owner Mike Rolison. “It was great to see the dominance by Augustus as he’s made great strides since joining us. Norberg back on top of the podium was what we’ve been waiting to see, and to have Hannah fighting him for the victory was amazing. I take full credit for the issues surrounding Branyon Tiner and his end result on Sunday. He put in a solid effort to finish the race in third, only to be removed by a technical infraction. I apologize to him, his family and the entire team. This will be something we will address within and insure there are no more situations like this in the future.”

California driver Chase Hand gave RPG its fourth victory on the weekend, securing his first series victory in the KA100 Junior class. Hand was in contention for the victory on Saturday after winning the Prefinal. A last lap battle and contact spun the second generation karter around. He would eventually continue again to finish sixth. He responded back on Sunday to qualify second, win the Prefinal and drive away to victory in the Final by five-seconds. Hand made his USPKS X30 Junior debut on the weekend, recording two top-15 results. After qualifying 10th on Saturday, he fell down to 12th by the end of the main event. Sunday, Chase improved from 16th to sixth in the Prefinal, only to be involved in an opening lap incident to drop him to the tail of the field. He drove a strong 14-lap race, improving 16 spots to end up 11th.

Oregon’s Graham Trammell was toward the front all weekend in KA100 Junior alongside Hand. Trammell set fast time in qualifying on Saturday, and but was shuffled back to eighth by the end of the main event. Sunday he returned to the top-five, placing fourth in qualifying and third in the Prefinal. He was fighting to hold on to the second position at the end of the race when contact sent him off track, and out of the race. Greyson Shobert of Washington was unable to reach the checkered flag in both main events, involved in contact to end each day.

A first USPKS podium is just on the horizon for RPG driver Nolan Allison in the KA100 Senior class. Allison was inside the top-10 all weekend long. Saturday was a two-spot improvement from seventh to fifth in the main event. Allison started ninth on Sunday and was in the fight for the podium position on the final circuit, only to come one position short in fourth, recording his best finish of the four rounds in 2021. Gia Cicero was in contention on Sunday, along with Allison until contact on the opening circuit took her out of contention. Cicero was fifth after qualifying but fell to eighth in the Prefinal. It put her in the middle of the blender at the start, costing her a chance at racing for the podium. She would go on to finish 34th in the 60-kart field after recording a DNF on Saturday. Florida’s Grace Hemmerde recorded her best result of the 2021 USPKS season, improving from 45th to 26th in the Saturday main event. After gaining 18 spots in Sunday’s Prefinal, Hemmerde suffered a DNF in the Final. 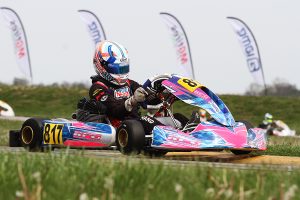 X30 Masters Round One winner Mario Barrios added two more podium results for RPG on the weekend, placing runner-up in both main events. A record field of 26 drivers, featuring some of the best from the USA were competing at the front all weekend long. Barrios was able to hold the second position on Saturday. Sunday began with Mario on the pole position after winning the Prefinal. After a hard-fought 14 laps, some last lap passes allowed him to finish second once again. Danny Robertson recorded two top-10 results on the weekend, placing eighth on Saturday and improving to sixth on Sunday. John Robicheaux recorded a top-10 result of his own, placing ninth on Sunday. He drove his RPG Kosmic up 10 positions up from 24th to 14th in the Saturday Final after a DNF in the Prefinal. Robert Maier nearly broke into the top-10 on Saturday, placing 11th. Sunday was not in his favor, involved in a wreck in the Prefinal and suffered a DNF in the Final.

“I’m happy to see Chase find such great success in his first few months with us at RPG, and get that first USPKS victory,” continued Rolison. “Our young program is growing again with the Micro and Junior drivers under the tent developing each weekend. And the old guys in Masters continue to have fun and improve each time we work with them. I’m really excited about what we all have accomplished thus far in 2021 and energized for the summer months ahead for the team.”

The Rolison Performance Group hauler heads west for the team’s next race, visiting the Utah Motorsports Campus in Grantsville, Utah for the Superkarts! USA Pro Tour SpringNationals, set for the May 21-23 weekend.