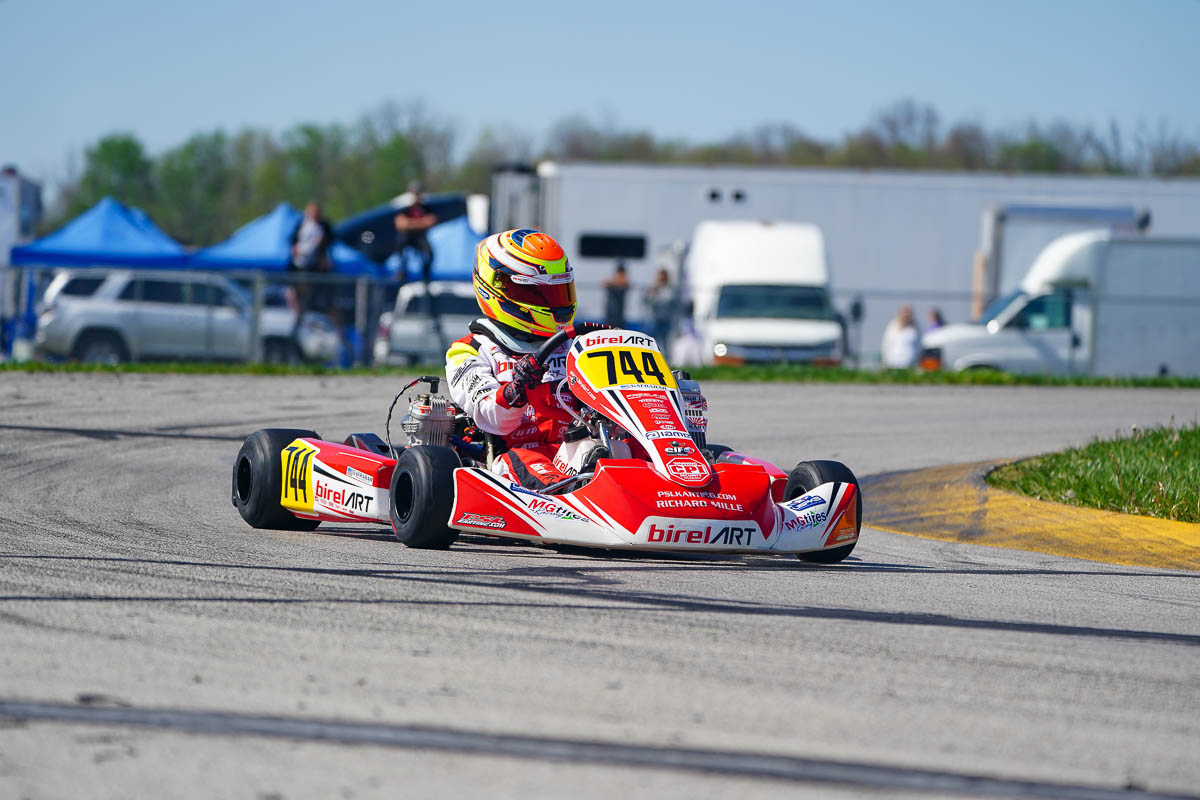 It was a winning weekend for Birel ART North America driver Caleb Gafrarar as he was able to battle to the front of the talent filled X30 Pro Junior field. Taking on some of the top junior drivers in the country at the growing United States Pro Kart Series (USPKS), Gafrarar turned his top-ten performance on Saturday into a winning result on Sunday to climb to the top step of the podium. Claiming the prefinal win and jumping to the lead early in the main event, the North Carolina resident never looked back and secured the win by .643 over a strong field of drivers.

After progressing through one unofficial test day and a practice day, Gafrarar returned Saturday with confidence as he was anxious to get the wheel-to-wheel racing underway. Scoring the sixth fastest lap in qualifying and an outside row three starting spot for the prefinal, the BirelART North America driver levelled up one position to finish fifth while scoring the fastest lap of the race. In the main event that featured close, hard racing, Gafrarar was pushed back to just inside the top-ten before battling back to earn a sixth-place result.

“The draft is huge here and typically when one person is passing you, it is three or four,” expressed Caleb G. “From my European events I have learned to be more aggressive and get back in line quickly. The competition at the USPKS program is tough but I look forward to having another shot at it tomorrow.”

Returning to the track on Sunday, the day started well for the North Carolina resident turning the fifth fastest time of the 31 competitors in the morning warmup, only .276 away from the top spot. Qualifying was another two positions better as times improved and Caleb G turned the third fastest lap of the session. Set to start the prefinal from the inside of row two, the goal was simple for the Birel ART driver. Taking the green flag and battling hard for the second position over the first four laps, Gafrarar took the lead on lap five and never looked back. Stretching the gap by over three tenths when the final checkered flag flew, Gafrarar earned his first USPKS prefinal win of the season and would start the main event from the pole position.

Jumping out to the led early and opening a gap of nearly one second after just two laps in the main event, the race was on for the 16-lap X30 Pro Junior final. Looking to draw away from the field, Gafrarar looked to be successful early as he stretched his gap to more than two seconds after only five laps. With a field of hungry junior drivers behind him, the BirelART driver kept his head down as the second, third and fourth place drivers got organized to work together and began to close the gap. Taking chunks out of Gafrarar’s lead for the next few laps, the gap shrunk to 1.8 seconds but leveled off after that. In the latter stages of the race the gap closed more, but Gafrarar was able to hold on for the win.

“I just kept my head down and made sure that I hit my marks lap after lap,” added Gafrarar. “I knew we were fast, but you can never trust the draft here at New Castle.”

With a few weeks off and momentum on his side, Gafrarar will head across the country to the Utah Motorsports Campus later this month. Taking on rounds three and four of the Superkarts! USA Pro Tour, Gafrarar hopes to continue his winning ways in one of North America’s toughest national karting programs.