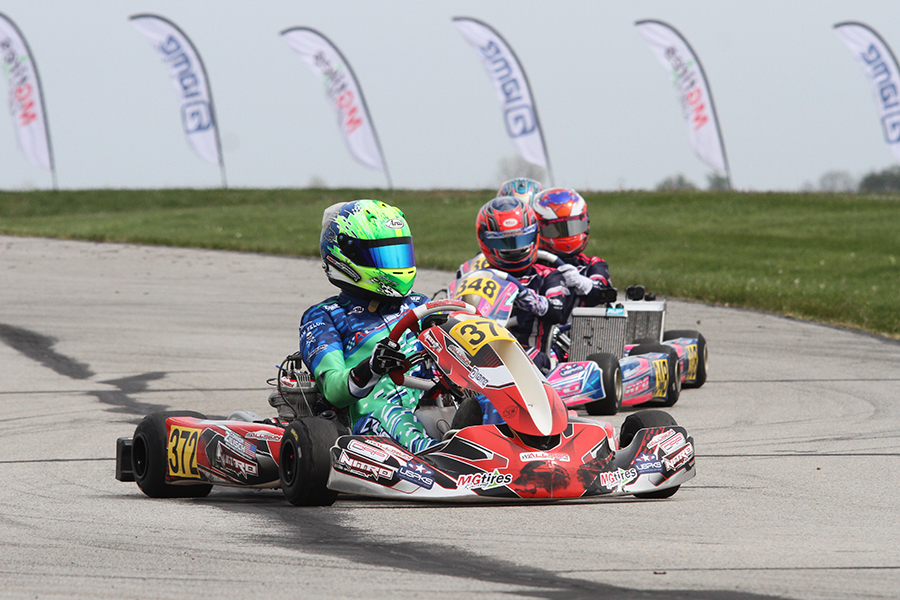 Connor Zilisch won his second on the year in X30 Pro (Photo: EKN)

The 2021 United States Pro Kart Series presented by MG Tires closed out the Heartland Grand Prix on Sunday at the New Castle Motorsports Park facility. A total of 273 entries completed Round Four on the ‘Backwards 1’ layout at the New Castle, Indiana complex with warmer temperatures greeting everyone. The wind continued as it had throughout Friday and Saturday, with the seven IAME categories battling through the Qualifying, Prefinal and Final events for the day.

The Franklin Motorsports X30 Pro division welcomed its second winner on the season. At first, Saturday winner Ryan Norberg (RPG / Kosmic) was in position to do so, setting fast time in qualifying. Round Two winner Connor Zilisch (Nitro / Redspeed) fought past Norberg in the Prefinal, bringing Branyon Tiner (RPG / Kosmic) with him. Zilisch led the field early before Norberg took a turn at the point. That was when Tiner grabbed the position and was able to get away as they fought for the second position behind him. Zilisch clawed away with the second spot and was able to run down Tiner by lap 11 with Hannah Greenemeier (RPG / Kosmic) coming with. Zilisch would drive away unchallenged in the final five laps to claim his second class victory on the season. Norberg was able to catch and work past both Tiner and Greenemeier for the runner-up spot. Tiner was classified second until he was removed from the results, promoting Greenemeier to third. Pauly Massimino (MDR / Kosmic) won the fight for fourth ahead of Arias Deukmedjian (KSNA / Kart Republic) on the final circuit. The drive of the race was an amazing performance by Louie Westover (Solo Kart USA), climbing from 38th to seventh with the fast lap of the race. Norberg came away from the weekend with the $5,000 payday as Zilisch was second, earning $2,500 with Greenemeier taking home $1,250. 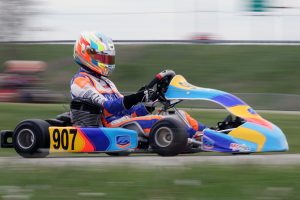 A dominating performance on Sunday in KA100 Senior by Arias Deukmedjian (Photo: EKN)

Arias Deukmedjian (KSNA / Kart Republic) was able to claim his first victory of the season in the Mike Doty Racing KA100 Senior division. Deukmedjian was third after qualifying with Senior rookie Aiden Levy (TF / Tony Kart) setting fast time with AJ Myers (Magik Kart USA) in second. Deukmedjian took only a few laps before he was in the lead, and drove away to a near four-second win. The main event was heated, for every spot except P1. Deukmedjian was able to rocket away at the start and heavy fighting for second early gave him a solid cushion in the opening laps. Connor Zilisch (Nitro / Tony Kart) eventually muscled away with the position, but Deukmedjian set a monstrous pace in the 14-lap Final. Arias was faster and faster with each lap, and recorded the lone lap time in the 1:12’s, on the final circuit. Deukmedjian took the victory nearly nine seconds ahead of Zilisch. The fight for third went down to the wire with Thomas Annunziata (MDR / Tony Kart) climbing from 17th to third, edging out Nolan Allison (RPG / Kosmic) and Connor Ferris (TFR / Kart Republic) at the line. 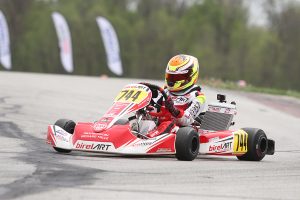 The Rolison Performance Group X30 Junior class welcomed its fourth different winner on the season. Round One winner Jeremy Fletcher (TF / Tony Kart) was quickest in qualifying, but would get shuffled back to fourth in the Prefinal. Caleb Gafrarar (PSL / Birel ART) came from third on the grid to win the Prefinal. A wild start to the 16-lap Final saw a number of front runners involved, including the point leader Fletcher. Gafrarar took advantage of the clear track from the pole position, jetting out to a comfortable lead. Leading all 16 laps, Gafrarar scored his first victory in his Junior USPKS debut. Max Garcia (AKT / Will Power Kart) closed late, but was not close enough and grabbed his second runner-up finish of the weekend. A great performance was put in behind them as well, with Rowan Gill (MDR / Kosmic) climbing from 20th to end up third on the podium as hard charger of the race. Jack Jeffers (SCR / Redspeed) was among those in the opening lap skirmish, and fought forward with fast laps of the race to claim fourth at the checkered flag, just ahead of Christian Miles (MDR / Kosmic). Garcia’s results helped him to earn the $2,500 payday for the cash purse with Gafrarar winning $1,500 and Jeffers taking home $750. 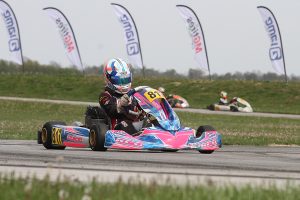 Another new winner in USPKS competition came in the Timmy Tech KA100 Junior class. The day had two drivers standout, with Saturday winner Sebastian Wheldon (JC / Komsic) taking fast lap honors in qualifying before Chase Hand (RPG / Kosmic) took control in the Prefinal. Hand took advantage of the pole position to get away from the field at the start, along with heavy fighting for second early on. After 14 laps, Hand established a five-second advantage to earn his first USPKS victory. Wheldon and Graham Trammell (RPG / Kosmic) were fighting for second for much of the race until another group caught them on the final circuit. Their scrambling and mixing in the new drivers brought contact, sending Trammell off the track. Noah Baker (Supertune / Tony Kart) was able to reach the line second ahead of Wheldon. Helio Meza (IRM / Tony Kart) was fourth, but a four-position penalty for contact dropped him to eighth. That promote two-time Ocala winner Jeremy Fletcher (TF / EOS) to fourth, up from 11th with Parker DeLong (RPM / Tony Kart) classified fifth. 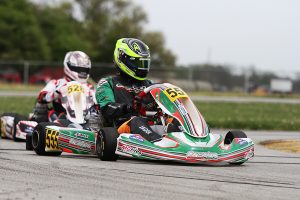 Renato Jader David now has a victory at USPKS to his long list of achievements in X30 Masters competition (Photo: EKN)

Four different rounds with four different winners in the Speed Concepts Racing X30 Masters class. Renato Jader David (Orsolon / Tony Kart) and Mario Barrios (RPG / Kosmic) were the early contenders as top qualifier and Prefinal winner. The lead pack grew in the Final, including Saturday winner Scott Roberts (SCR / Redspeed), Derek Wang (Crosslink / Exprit) and Miguel Mier (Crosslink / Exprit). Wang was the quickest of the group, starting sixth and working his way up to the point with three laps remaining. On the final circuit, Renato dove inside at the Monza corner, and the rest of the group fought to get past Wang in the scoreboard. A little contact sent Wang two wheels off the track, dropping him back. Roberts took advantage and attacked on Barrios for the second spot. This allowed Renato to drive away to the victory, his first in USPKS competition. Barrios and Roberts fought in the closing corners until Roberts spun in turn 15 in front of the pits. Barrios went on to finish second with Mier crossing the line in third. Mier was pushed back to fifth due to a pushback bumper penalty, moving Wang up to the third step of the podium and putting Adam Pettit (Solo Kart USA) into fourth. 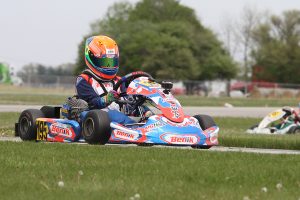 Enzo Vidmontiene (Benik) put in his best performance of the season, earning a second victory in four rounds in the Trinity Karting Group Mini Swift division. Vidmontiene qualified fourth, but worked his way to the point in the Prefinal for the win. The Final was a battle early on, with Sarah Bradley (Nitro Kart) stealing the lead for a lap. Vidmontiene however controlled the point, and eventually was able to break away from the pack as the fought hard behind him for the second spot. After 14 laps, Vidmontiene took the checkered flag by four seconds. Saturday winner Kai Johnson (AKT / Kart Republic) started in 12th and fought his way forward, taking the runner-up spot with 2020 Micro Swift champion Jack Iliffe (IRM / Tony Kart) landing on the podium for the first time in third. Indy Ragan (FMS / Merlin) came away with the fourth spot with Oliver Wheldon (JC / Kosmic) in fifth. 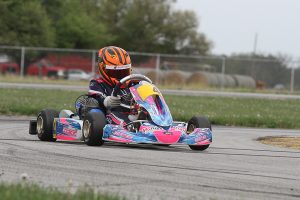 A perfect weekend with a second victory in Micro Swift for Augustus Toniolo (Photo: EKN)

Sunday was the second half of the perfect weekend for Augustus Toniolo (RPG / Kosmic) in the Team Ferris Racing Micro Swift class. Toniolo put in a flawless performance in Round Four. He cleared the field by three tenths of a second, and led every lap of the Prefinal and Final to complete a perfect two rounds of racing on the weekend. Alessandro Truchot (Parolin) won the battle for second ahead of Round Two winner Keelan Harvick (Nitro Kart) and Gianmatteo Rousseau (Nitro Kart). Ashton Woon (Nitro Kart) completed the top-five.

With the 2021 United States Pro Kart Series now at the halfway point, the attention turns to the famed Road America facility and the CTECH Manufacturing Motorplex. Rounds Five and Six will be contested on the July 9-11 weekend.