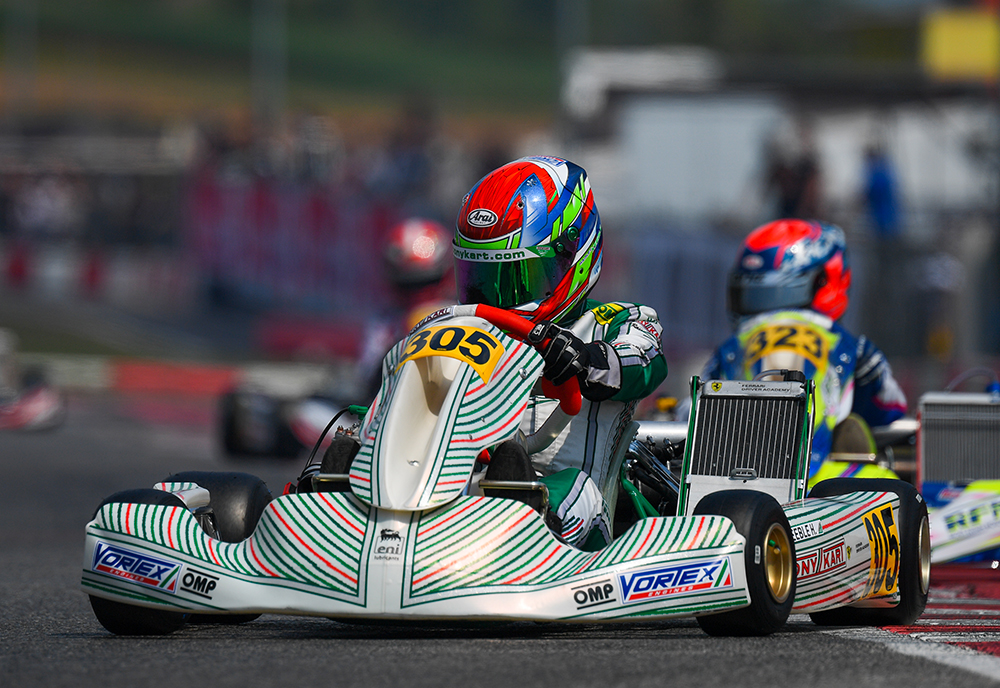 Harley Keeble hits the second consecutive podium on the circuit of Lonato, this time in the final of the OKJ class valid for the fourth and last round of the WSK Super Master Series. Our Racing Team is fast and concrete also in KZ2, OKJ and MINI class.

Tony Kart Racing Team’s path in the WSK Super Master Series 2021 ends with a podium in the final (and a fast lap). At the South Garda Karting, our Tony Kart Racer 401R chassis (for the categories KZ2, OK and OKJ) and Tony Kart Rookie 2020 chassis (for the MINI class), with the Vortex engines to give a hand, show excellent performances during the whole weekend of races.

In OKJ, Harley Keeble repeats the result obtained two weeks ago on the track of Lonato, on the occasion of the first round of the WSK Euro Series. The British driver is one of the protagonists of the category final and runs in 2nd position from the beginning to the end.  Keeble closely follows the leader of the race and finishes under the chequered flag with a delay of less than a second. The young driver of our Racing Team conquers also a fast lap in the pre-final, further sign of his competitiveness.
Last day of races to remember also for James Egozi, author of a very important performance. The American driver, at his first year in the category, first recovers 11 positions in the pre-final and sets the fastest lap, then he enters the top 5 in the final with another 5 positions gained and, again, the best lap of the race. Alexander Gubenko comes close to the top 10: he is in fact very effective in the eliminatory heats also signing a fast lap.

Simo Puhakka is among the top ten drivers of the KZ2 final. The race is stopped after a few corners due to an accident at the first bend, where the Finnish driver is involved in some serious collisions. The break allows our mechanics to repair his kart within a few minutes, so to allow Puhakka to take part in the final where he recovers not less than 11 positions in total, on a track that allows few overtakes in the “master class”. Debut in our Racing Team for Lorenzo Camplese who finishes in the top 15 of Sunday’s final, where there are much more trained drivers at the start and familiar with their karts. The Italian also gets a third place in the third eliminatory heat and only due to an unlucky stop in the first heat he is not able to enter the top positions of the event ranking. Gilles Stadsbader and Josef Knopp, in a category full of competitiveness, put on track good performances, constantly improving their position compared to the starting grid.

In OK, Joseph Turney is among our fastest drivers of the category during the whole weekend and finishes in the top 5 in the final race, preceded by a 2nd position in the pre-final. The British driver also collects two additional podiums during the eliminatory heats. Consistently in the top positions of the ranking is now Tuukka Taponen. The Finnish driver finishes in the top ten list of the final where he improves of 4 positions compared to the starting grid. Also Alfio Spina reaches the final, predicted by a pre-final where he is close to the top 10 and by the eliminatory heats where he recovers several positions (in one race even 11). Bruno Del Pino is forced to retire in the final: a pity, especially considering his good performance in the heats.
In the MINI category, Jimmy Helias has to start nearly from the back of the grid for the final and climbs not less than 11 positions, showing character and speed. Skills that are also necessary to sign a podium as well as other important results gained in the eliminatory heats.

The Tony Kart Racing Team doesn’t stay still and, on the contrary, will be on track again next weekend (29th April – 2nd May) on the occasion of the RGMMC Champions of the Future in Genk, Belgium. On the occasion of the first round of the championship we will be at the starting grid of OKJ and OK classes.