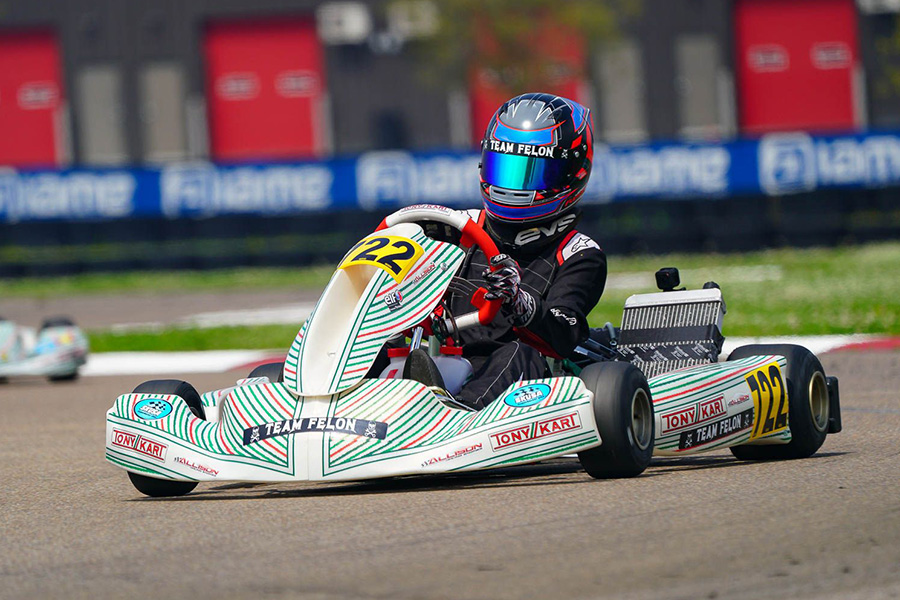 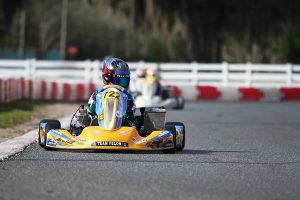 Fletcher began the month of March with three wins at the United States Pro Kart Series opener, one in X30 and two in KA100 Junior (Photo: EKN)

The four weekends in March were busy with racing in the USA karting scene, welcoming outstanding numbers in the events that helped to close out the winter programs and begin the summer season championships. It was a busy three week stretch in the southeast with the United States Pro Kart Series and Superkarts! USA Pro Tour kicking off their 2021 programs while the championships were decided at the Florida Winter Tour in between those two events. Florida driver Jeremy Fletcher contested all three races over that three-week period, and put down some of his best performances at the Junior level to date.

It all began with a dominating performance at the USPKS Southern Grand Prix at the Ocala Gran Prix facility, the track Fletcher honed his skills in Kid Kart and at the Cadet level. Fletcher ran both the X30 Junior and KA100 Junior categories on the weekend with two rounds of racing over the two days of competition. Fletcher ended up fifth in qualifying for X30, but worked his way to the point quickly to control the 39-driver field at the checkered flag. The Final was all Fletcher, leading all 22 laps for the victory.

The KA field had 48 drivers and was split up for qualifying and the Prefinals. Fletcher was fourth overall in qualifying and was able to came away with the win in his heat race. When they put the field back together for the Final, Fletcher was among those fight for the victory. Leading just two laps, Fletcher settled into the second spot where he would cross the line. Provisional winner Danny Dyszelski would be removed from the results following tech, thus promoting Fletcher to the top of the podium.

Sunday was a near perfect day in the KA100 class, scoring a second straight victory. After setting fast time in qualifying, Fletcher led all the laps in his Prefinal. Austin Jurs was the only driver to relegate Jeremy out of the top spot in the Final, leading just two laps until Fletcher returned to the point and leading the rest of the 22-lap distance. The X30 class was hard-fought all day long with Fletcher inside the top-three. Slipping to third at the start of the Final, Jeremy was unable to move forward and finished there, earning a fourth podium finish in the four main events on the weekend, leaving with three first-place trophies, two championship leads and a $2,500 payday.

The following weekend was the Florida Winter Tour finale at the same Ocala facility, for what would unfortunately be the final race held at the Ocala, Florida circuit with its recent announcement to close. Fletcher was among the contenders all weekend in the Junior ROK category. Rain came for the main event with Jeremy placing fifth in the main event, ending the championship in the third position.

The third and final weekend of the month took Fletcher west to the SKUSA WinterNationals at NOLA Motorsports facility in Avondale, LA for the opening rounds of the 2021 SKUSA Pro Tour. Double duty was on the docket for Fletcher throughout the weekend racing in both X30 and KA100 Junior classes. Jeremy began the weekend in X30 qualifying fourth for Round One. He drove up to the front and crossed the line first in the Prefinal, only to be dropped two positions for a pushback bumper penalty. Fletcher went immediately to the lead in the main event, and then battled with defending champion Carson Morgan for the remainder of the race. Morgan took the on-track win but a blocking penalty added three seconds to his total time. This penalty advanced Fletcher to the win, his first in SKUSA Pro Tour action in the category.

Sunday brought on a good start and nearly the fast time in qualifying for Jeremy, missing out on the P1 position by 89 thousandths. What began as a promising day turned to trouble in the Prefinal. After battling for the lead through the first seven laps, lap eight sent Fletcher off the course and down to the tail of the field, eventually classified 21st. Making quick work on the opening circuits of the Final, Fletcher was up to 10th by the end of lap three. With a steady pace and some drafting partners, Jeremy was able to move up to third in the waning laps and then, on the penultimate circuit, grab the lead with a late move in Turn 17. Fletcher held off all challenge on the final circuit to complete the drive of the weekend.

A podium finish was in sight during Round One in the KA100 Junior main event after winning the Prefinal but a pushback bumper penalty dropped him to P3 at the start. Fletcher led for two laps before getting shuffled out of the position. A few laps later, he pulled off with a mechanical issue, ending his day. Sunday was another fight for a podium spot, inside the top-five all day but ending up in the fifth position at the checkered flag.

Next on the docket for Fletcher is this weekends United States Pro Kart Series Heartland Grand Prix at the New Castle Motorsports Park in New Castle, Indiana. He leads both the X30 Junior and KA100 Junior championships going into the weekend. Two weeks later, Fletcher travels to the Utah Motorsports Campus for the SKUSA Pro Tour SpringNationals on May 21-23. He leads the X30 Junior standings while sitting ninth in KA100 Junior. 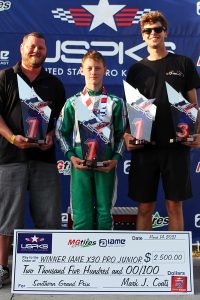 Chassis: Tony Kart
Engine/Engine Builder: Allision Racing Engines
Sponsors: PKT Axels, Orlando Kart Center, Odenthal Racing Products, Nextzettusa, and Theholsterstore
Series You Compete In: SKUSA Winter Series, SKUSA Pro Tour, United States Pro Kart Series, Florida Winter Tour, ROK Florida, ROK Festivals, Orlando Cup, and WKA Man. Cup
Years Karting: 9.5
How Did You Get Started In Karting: When I was 4 I went along with my grandpa to Ocala Gran Prix all the time
What Has Been The High Point In Your Racing Career: My return to Gary Willis and to Team Felon this year
What Are Your Goals In Racing: Have fun and win
In A Few Word Describe Your Driving Style: I describe my driving style as crafty and unique
Funniest Moment At The Race Track: Ripping down the ROK banner at Ocala accidentally

What Do You Do When Your Not At The Track: Play basketball, iRacing, go to skatepark, ride dirt bike, and wakeboarding
What Are Your Goals Outside of Racing: Live life to the fullest
What App or Games Do You Play Right Now: 2K21 and iRacing
What Type of Street Car Do You Wanna Drive: Subaru WRX
What Are Pet Peeves or Things That Irritate You: Blocking In Practice
What Do You Think To Improve The Sport of Karting: To attract more young racers
What Are Your Favorite Aspects About The Sport of Karting: How close it can bring people, the personal relationships I develop.