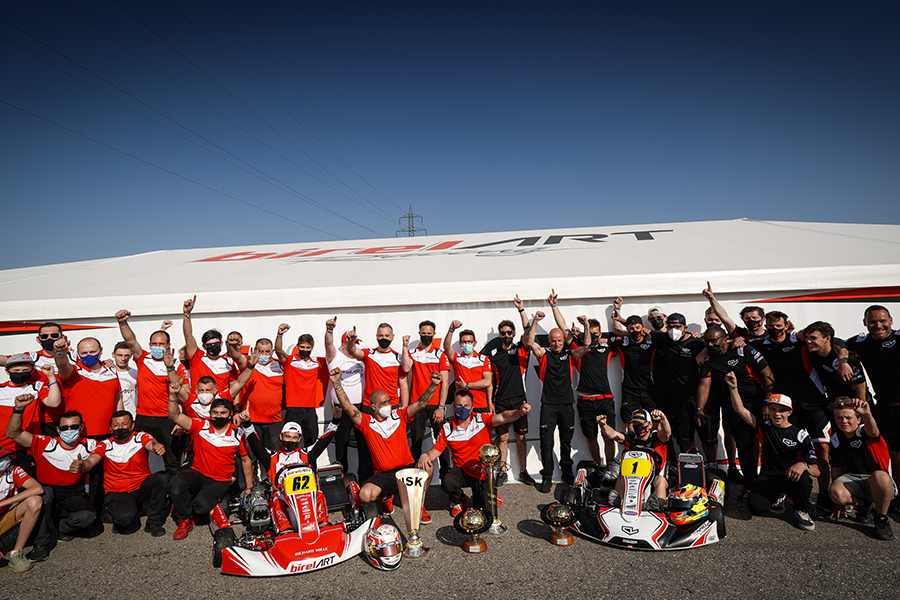 The WSK Super Master Series concluded in Lonato with another success for Birel ART Racing driver Marijn Kremers. After his victory in Sarno, the 2019 World Champion has established himself as the overall winner of the KZ2 category within the series organised by WSK Promotion at the start of the 2021 season. At the same time, Tymoteusz Kucharczyk in OK, William Macintyre in OK-Junior and Dries Van Langendonck in Mini demonstrated the competitiveness of the Lissone brand in all categories.

“Winning the first 2021 championship against very strong competition is very satisfying and a very positive sign for the rest of the season“, confided Ronni Sala, President of Birel ART, “I am proud of the team’s work as well as that of the whole factory, which strives every day to produce high-performance chassis. Congratulations to Marijn Kremers, to Giuseppe Palomba for his top five, to the race technicians and to Riccardo Longhi who started his new role of team manager with a lot of conviction, even if it couldn’t have been easy for him to watch his team-mates fighting on track from the trackside. It is now a question of continuing our efforts to build on this winning momentum and to improve our results in the other categories thanks to already very promising competitiveness.”

Marijn Kremers fulfilled his mission perfectly in Lonato, putting in solid runs to be able to win the Prefinal. He managed to be both fast and safe in the Final, with his 2nd place on the finish line allowing him to move up to the top of the Championship and win with a comfortable lead over his rivals. Giuseppe Palomba also had a good run and finished in the top five of the series. Alessio Piccini was more and more effective with his Birel ART and Marcus Funda obtained his best result of the year.

Tymoteusz Kucharczyk made an excellent start to the meeting with his Kubica Racing Kart. 4th on the grid in the OK Final, he had to fight to make up ground after an unfavourable first lap and managed to finish 6th in the Championship. Cristian Bertuca showed good competitiveness and finished with a gain of six places to 11th position in the Final.

Matheus Morgatto proved to be very combative during the Qualifying Heats. His top performances allowed him to move up 18 positions in this phase and to finish 12th in the Final. Igor Cepil progressed in his mastery of the equipment, as evidenced by his six places gained on the track in the Final.

William Macintyre demonstrated the excellent competitiveness of the Birel ART / TM Racing package in OK-Junior during superb heats and a Prefinal that he finished in 2nd position. He was in the lead in the Final, but a slight contact in the battle lost him several places and put him out of the fight for victory. For his first competition in the colours of Birel ART Racing, the Russian Egor Melentev was more than convincing thanks to his qualification and his progression in the Final.

Dries Van Langendonck showed great fighting spirit throughout the Mini Qualifying Heats. Fast and safe, he progressed in each race to reach 7th place in the ranking on Saturday evening. An incident during the last lap of Prefinal A unfortunately prevented him from reaching the Final.

The Birel ART Racing team will now intensify its preparation for the European events in May with a reinforced OK and Junior team.