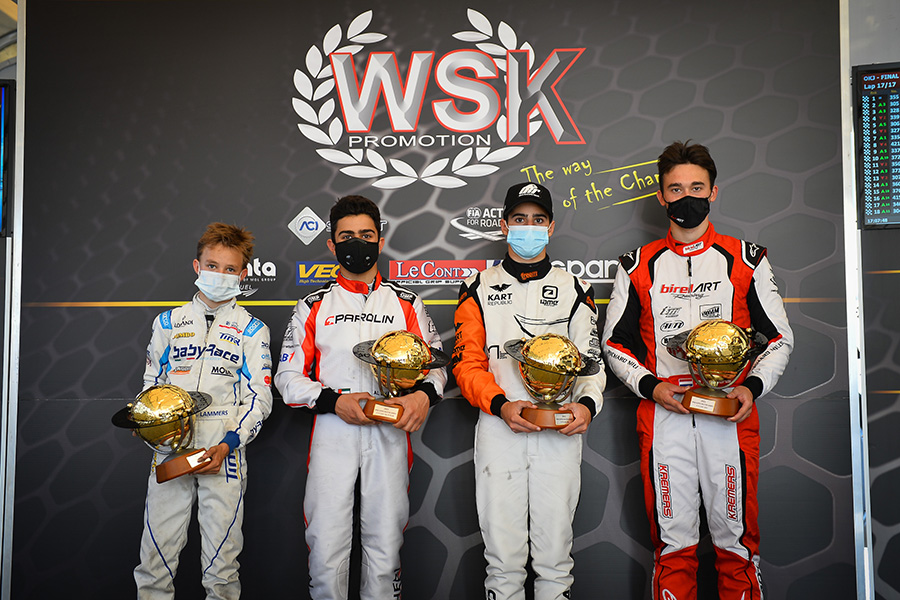 The fourth and closing round of WSK Super Master Series at the South Garda Karting circuit in Lonato named the 2021 champions in a round that had an important participation with 316 drivers coming from 44 different countries. This made the 12th edition of the series organized by WSK Promotion reach 1.100 presences including the three rounds held in Adria, La Conca and Sarno. 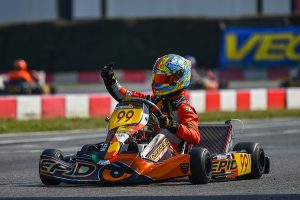 Two Prefinals were run for each category and the top 17 drivers of each race qualified for the Final.

In OK, classification leader Rafael Camara (KR Motorsport/KR-Iame) won the first Prefinal after dominating the weekend in Lonato since the beginning. Prefinal-B saw another strong interpreter of the category, Andrea Kimi Antonelli, having the upper hand, which envisaged for a KR Motorsport duel on top.

MINI’s Prefinal-A was won by the Dutch René Lammers (Baby Race/Parolin-Iame), who won the heats after a good comeback from qualifying practice and a shared lead with the Spanish driver Christian Costoya (Parolin Motorsport/Parolin-TM Racing). In Prefinal-B Costoya, despite being the most  credited contender, slipped down to P13. The victory of Prefinal-B went to the Romanian David Cosma-Cristofor (Gulstar Racing/KR-Iame). 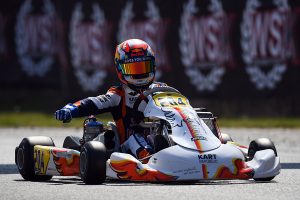 Great win to Denner in the KZ2 final, but Kremers gets the title

In KZ2, after a stop due to an incident at the start, the Frenchman Emilien Denner (Intrepid Driver Program/Intrepid-TM Racing) got the lead of the race and claimed a solid win, while the Dutch Marijn Kremers (BirelART Racing/BirelART-TM Racing) installed himself soon in P2 finding his way past the other French driver Adrien Renaudin (Sodikart/Sodikart-TM Racing) and kept the position until the end. This result earned him the title. The third step of the podium went to the Dutch driver Stan Pex (KR Motorsport/KR-TM Racing), who recovered four places from his position on the starting grid. The previous classification leader, Juho Valtanen (KR Motorsport/KR-TM Racing) did not go beyond P8 and therefore closed the championship in second place, leading the Swede Viktor Gustavsson (Leclerc by Lennox/BirelART-TM Racing). 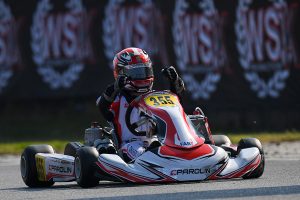 In OK the duel for the title involved the Brazilian Rafael Camara (KR Motorsport/KR-Iame) and his teammate from Italy Andrea Kimi Antonelli. A third driver of KR Motorsport, the Brit Arvid Lindblad, came out on top from this battle. He took the lead of the race, keeping it all the way to the chequered flag. The second place was enough for Rafael Camara to secure the title though, while Andrea Kimi Antonelli had to settle for P6 after losing some ground at the start. The third step of the podium went to the Italian Luigi Coluccio (Kosmic Racing/Kosmic-Vortex) at the end of a great weekend for him. Antonelli ended the championship in second place, while the final victory earned Lindblad the third place of the classification.

United Arab Emirates’ driver Rashid Al Dhaheri (Parolin Motorsport/Parolin-TM Racing) dominated OK-Junior in Lonato and secured the full haul that allowed him to take the lead of the standings, due also to the troubled weekend experienced by the previous leader, the Jamaican Alex Powell (KR Motorsport/KR-Iame). Al Dhaheri secured a solid win in the final leading the Brit  Harley Keeble (Tony Kart Racing Team/Tony Kart-Vortex) and the Japanese Kean Nakamura-Berta (Forza Racing/Exprit-TM Racing). Powell was 18th in the final and ended third in the final classification, as he was overtaken also by the Brazilian Matheus Ferreira (KR Motorsport/KR-Iame), who was fourth in the final.

Lammers dominates the MINI final and claims the title 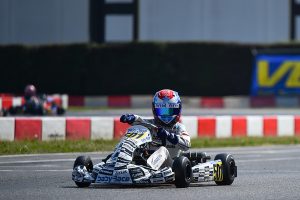 In the final sprint to the title of MINI the Dutch René Lammers (Baby Race/Parolin-Iame) had the upper hand and managed to get past his main rival, the Spanish driver Christian Costoya (Parolin Motorsport/Parolin-TM Racing). The victory in the Final earned Lammers the title, while Costoya had a troubled Prefinal and recovered several positions in the Final, but could not go beyond P10. The Italian Emanuele Olivieri (Formula K Serafini/IPK-TM Racing) completed a good race ending second behind Lammers (both in the final and in the championship). The Russian Vladimir Ivannikov (Drago Corse/EKS-TM Racing) also did a good race and ended third. The Russian Gerasim Skulanov (CRG Racing Team/CRG-TM Racing) recovered a lot of places, but had to settle for P4.

The next appointment on track is on June 13th in Adria for the second round of the WSK Euro Series. 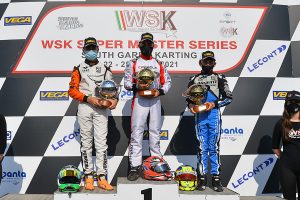 A total of 10 drivers with North American ties competed at Lonato for the WSK Super Master finale. Things looked promising for 2021 SKUSA Winter Series champion Mathias Orjuela (COL) as the Parolin Motorsport driver was leading Prefinal B. Orjuela was shuffled back with two laps remaining, taking him out of a transfer position to end his weekend early. Canadian Jensen Burnett (Energy Corse) was able to qualify, starting the Final in 10th, finishing 12th for his best result of the series. Orjuela, despite the DNS for the Final, finished seventh in the standings with Burnett in 22nd.

A total of seven drivers were in the OKJ category, with four of them in the Final on Sunday. They were led by James Egozi (Tony Kart Racing Team). The driver from Florida fought his way forward in the Prefinal B, starting 16th to finish fifth. From there, he grabbed another five spots in the 17-lap Final for a fifth place performance, his best on the year. 2020 Challenge of the Americas champion Enzo Deligny (FRA) made his fourth straight main event. Deligny improved from 28th to 7th in the heat races, ending up fifth in Prefinal A. In the end, Enzo was 11th in his Parolin. Jamaican Alex Powell (KR Motorsport) had a similar weekend, advancing from 41st in qualifying to end up 15th after the heats. He held the eighth spot in Prefinal A but lost three spots in the Final, ending up 18th with a pushback bumper penalty. Powell did end up the series third in the final standings. For much of the weekend, Kai Sorensen (Parolin Motorsport) was the top USA driver. He ended up 12th after the heat races, losing two spots in the Prefinal B to start the Final from row eight. Unfortunately, contact after lap one took Sorensen out of the Final early.

Caleb Gafrarar (Leclerc by Lennox Racing), Xander Reed (KR Motorsport) and Logan Toke (Ward Racing) were unable to qualify for the Final in OKJ. Gafrarar finished P27 in Prefinal B, with Reed ending up 23rd. Toke, making his first start of 2021 in Europe, was 27th in Prefinal A.

Ugo Ugochukwu (KR Motorsport) was the lone USA driver in the OK category. Ugo was fourth after qualifying and improved one position through the heat races with results of third, third, and fourth. He slipped down the order in the Prefinal, losing four spots to start the Final from row six. The new McLaren signee advanced as high as sixth before getting shuffled down to mid-pack and eventually out of the race.