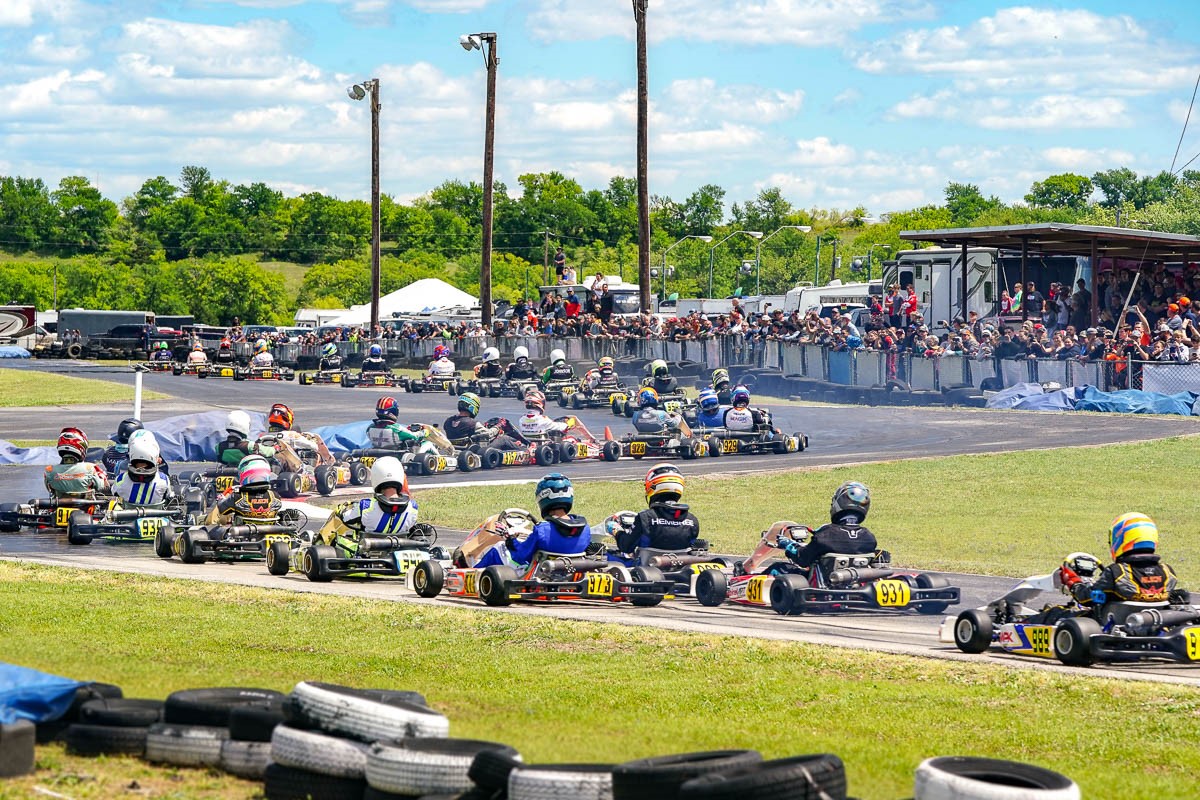 The second event of the 2021 Texas Sprint Racing Series Presented by Texas Barge nearly set a new entry record for the ‘Spring Round-Up’. A total of 171 entries filled up the paddock at the North Texas Kartway, home of the North Texas Karters, in Denton, Texas over the April 16-18 weekend. Wet weather greeted the teams and competitors during the practice day on Friday before the skies cleared up and provided great weather for the two days of racing. Each of the nine categories competing decided the weekend winner with long Finals to close out the event.

A record-setting 40 drivers competed in KA100 Senior presented by Exertech, forcing TSRS officials to adjust the schedule. The class was split up for qualifying, and then into groups for two rounds of heat races. Alex Stanfield was the quickest of the two groups in qualifying, posting a 38.025-lap. Stanfield went on to win the opening heat race (AvsB) with Luke Lange winning the next (CvsD). They came back to win again in the second round with Stanfield besting the field in AvsD while Lange won the BvsC heat. Lange jumped out to the lead to begin the 32-lap Final, leading the first seven laps. Reilly Cann took over for a few circuits until Stanfield, who fell to fifth early, fought back to reclaim the top spot. Stanfield led the remainder of the race, establishing a 3.3-second advantage at the checkered flag. Cann won the battle for second ahead of Lange, who posted fast lap of the race. Defending series champion Austin Osborne drove to fourth in front of Adrian Cruz. 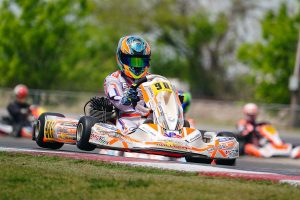 The 206 Senior class presented by 4T Concrete Pumping welcomed 26 drivers on the weekend, with everyone chasing defending champion Ethan Wolfe. After securing the fast time in qualifying, Wolfe led the majority of Heat #1, edging out Round One winner Adrian Cruz for the win and then led all of the shortened Heat #2. The two resumed their battle in the main event with each taking turns at the lead in the 30-lap race. Wolfe was able to come across in the end by 1.5 seconds to earn the victory. Zander Rogers won the fight for third ahead of Colton Underhill with Chuck Jensen completing the top-five.

Aden Rudolph recorded his first series victory in the KA100 Junior presented by Fullerton Motorsports class. Helio Meza started the event off with fast time in qualifying. He ended up second in Heat #1 with Nicholas Stouffer coming through to score the win. Meza bounced back in Heat #2, edging out Rudolph for the win as Cooper Shipman helped to push Stouffer back to fourth. The first half of the Final was Meza and Rudolph exchanging the top spot. On lap 19, Meza retired. That opened the door for Rudolph to cruise to the victory by 6.6 seconds. Shipman and Stouffer joined him on the podium with Joey Friend and Davis Cunningham placing fourth and fifth. 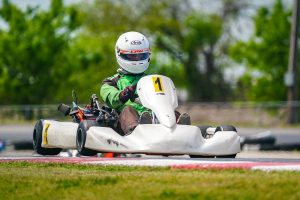 Dominating performance by Ethan Wolfe in 206 Senior with a sweep of every on-track session (Photo: Ken Johnson – Studio 52)

It was an event sweep for Phillip Winegeart in the 206 Junior presented by Core Karting division. Winegeart, who came into the weekend with the championship lead, was able to control the top spot from qualifying to the final checkered flag. Winegart led every lap of the two heat races, before going wire-to-wire in the 30-lap Final, winning by 15 seconds. Round One winner Caiden Wolfe won the battle for second ahead of Landen Welker and Alfred Alvarez del Castillo with Brayden Domingue ending up fifth.

Miguel Mier duplicated the sweep in NOLA with another at NTK in the KA100 Master presented by Kart Racing Solutions category. Mier cleared the field by two tenths in qualifying and led each lap of the two heat races. In the Final, Mier established an 8.9-second advantage in the 33-lap Final for a second straight victory. Martin Stone drove to second with Andy Miller in third. Defending champ Doug Foxworth was fourth with Edwin Ruiz de Val completing the top-five. 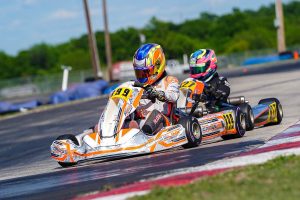 A second straight victory for Oscar Iliffe came in the Mini Swift class presented by Alan Rudolph Racing Academy on the weekend. The only session Iliffe did not finish in P1 was Heat #2. Iliffe set fast time and came away with the win in Heat #1 after leading every lap. The second moto saw Iliffe lead the opening half until Ragan Saville took control and scored the race win. They continued their battle toward the end of the main event after Iliffe led the first 20 laps. Saville grabbed the point and was leading at the white flag. Iliffe was able to make a last lap pass work, reaching the checkered flag first. Saville settled for second with Jack Iliffe a close third. Diego Guiot and Landon Skinner rounded out the top-five. 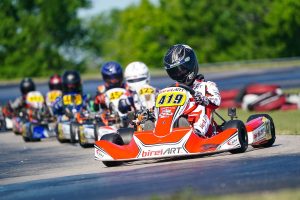 A similar feat in the 206 Cadet presented by Saville Electric class with Ragan Saville earning his second straight on the year. It was Emmett Eddolls who recorded the fast time in qualifying until the defending champion Saville led all 20 laps of Heat #1. Saville’s second heat only lasted three laps until he retired. Eddolls took control to win the race and started on the pole position. With the DNF, Saville had to come from outside the top-10. He made quick work to get himself back into the top-three by lap five. On lap 14, Saville took the lead and from there went unchallenged to a 1.5-second victory. Derek Wargo was able to slip past Eddolls for the runner-up position with Robert Arana fourth and Davis Henry fifth. 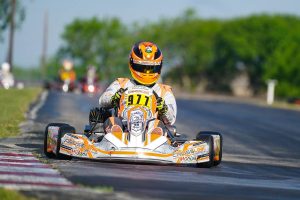 The fourth sweep of the weekend came in the Micro Swift category presented by PFX Storm Shelters division with Bobby Klein. Two tenths clear of the field in qualifying, Klein went on to lead every lap of Heat #1. Tyrone Kemper Jr. took the lead early in Heat #2, before Klein retook the top position and went on to win the race. The Final was a similar start with Kemper out front early and then Klein returning to the front of the field. After 29 laps, Klein established an 11-second advantage for the victory. Kemper held off Matthew Dukette for the runner-up position on the podium with Aston Wyatt fourth and Gage Bailey fifth. 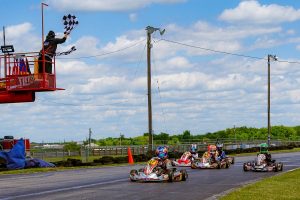 The Honda Kid Karts by A&M Excavating welcomed the second different winner on the season. Pasha Ali cleared the nine-driver field by three tenths in qualifying and led all 17 laps of Heat #1. Round One winner Tanner Barsch stepped up to beat Ali in Heat #2. The two went back and forth during the first half of the Final before Ali secured the top spot. From there, Ali drove away to the victory by 13 seconds. Barsch finished second with Colton Schniegenberg on the podium in third. Noah Gibson was fourth with Liam Nachawati in fifth.

The third event of the Texas Sprint Racing Series is set for June 11-13 at the Speedsportz Racing Park in New Caney, Texas for the 2021 Summer Shootout. Be sure to follow TSRS on Facebook and Instagram, and get details on everything at www.texassprintseries.com.