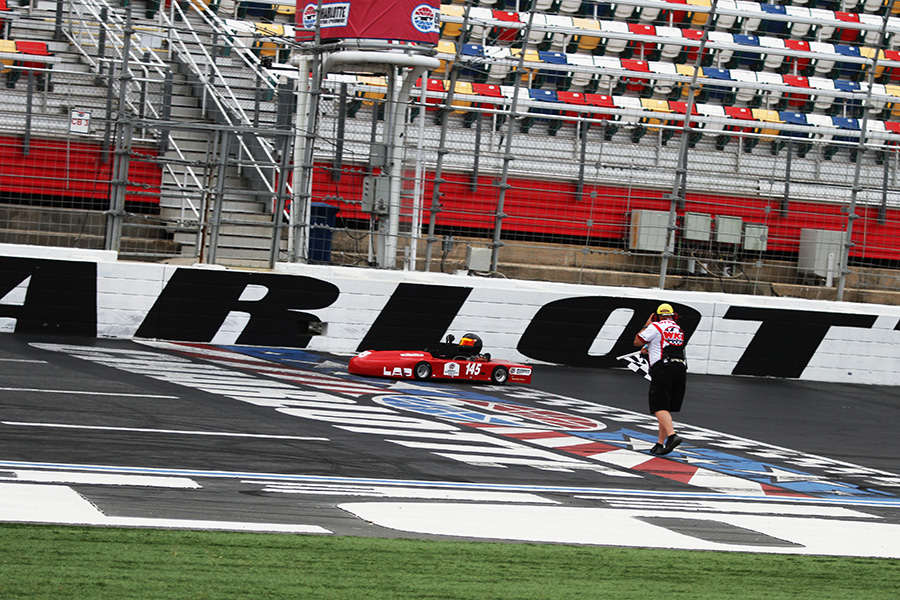 For a third straight year, the World Karting Association Vega Road Racing Series presented by Summit Racing Equipment visited the Charlotte Motor Speedway as part of the CMS Karting Challenge. The program ran a five-hour practice session on Friday, April 16 on the revised ROVAL course at the Concord, North Carolina facility, as WKA officials added the second ‘inner loop’ to the layout prior to the start of on-track activity. Saturday, April 17 saw seven race groups take to the track throughout the day, with the national categories racing for the coveted WKA Grand National Eagle trophy for the victory. Weather was perfect, aside from a slight sprinkle around the Noon time area that threatened to shut down racing before moving away. The concern was the number of red flags on the day, including four on the day. Thankfully, everyone was able to walk away. 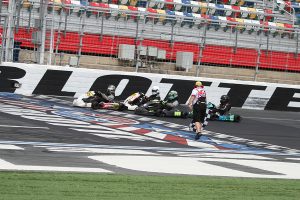 Photo finish in the CIK LO206 Sprint class to kick off the day with Jame Russell earning the victory (Photo: EKN)

The opening race of the day had a great battle before and after the red flag in the 22-driver CIK LO206 Sprint F1 race. Four drivers were able to break away in the 15-minute run after the red flag, with the race going down to a photo finish. Jame Russell was able to edge out Kevin Darling by five hundredths of a second, with John Miller and Doug Rink right there. Kyle Banovetz completed the top-five. Jake Mueller was able to outrun the 12-driver 100cc TaG Senior F1 class in the end, reaching the line first ahead of Ian McFarland and Makena Rice. Colin Teague and Gerald Locked rounded out the top-five.

Race Two was dominated by Jason Lorang in the IAME Sprint F1 class. Lorang led wire-to-wire in the 30-minute race against the five other starters in the class. Matthew Turner ran second with Gary Sircy in third. Otto Vollmerhauser drove to the win in WKA Sprint F1 over Mark Justice with Mandy Doles running solo in Yamaha Sportsman Sprint F1. 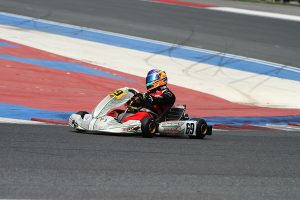 The sprinkles came at the start of Race 3, the quickest race group of the day featuring the Super Kart / Unlimited field. Paul Gatto was able to tip toe through the early wetness and last the full 30-minutes out front, laying down a best lap of 1:38.412 toward his Grand National Eagle. Attila Juhasz drove to second with Joey West rounding out the podium in the 13-driver field. The B Stock category went down to the wire with Michigan’s Jim Farr Jr. beating out Tom O’Reily to the line for the victory. Dusty Dean was classified in third in the six-driver class. Kristina Griffith was the lone driver in Open Sprint with Tom Tretow in Vintage Twin. 125 Sprint Shifter was one of attrition with a number of the front runners retiring early. Russ Pyles lasted the full distance, taking home the victory over Kevin Wheeler and Robert Wimmer. 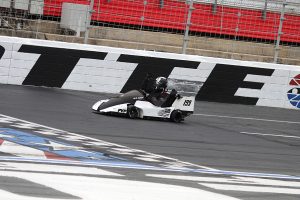 One of the best races of the day came in Race 4, featuring the Yamaha Senior category going for 45 minutes. A field of 18 drivers took the green, but it was two out front that decided the victory. ‘Mr. Daytona’ Randy Fulks and Patrick Olsen went back and forth all race long for the lead. Fulks had the edge through the infield, while Olsen was quickest in the straight line. On the final circuit, Fulks led through NASCAR 3-4, with Olsen drafting around the outside into the front straight chicane. Olsen would reach the line first to score the victory ahead of the veteran Fulks. Jason Lorang showed similar speed in third while Rick Fulks drove to fourth. Lamar Hilliard, in his first laydown race since his accident in Mid-Ohio last year, completed a comeback to finish fifth. David McCauley won in a solo effort in X30 Laydown as did Joe Thomas in Formula 100. 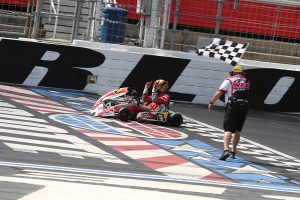 Despite a red flag for Race 5, the categories were able to get in close to the 30-minute distance they were scheduled to complete. The quickest category of the six on-track was Stock Honda, won by Steven Rougeou. It was he and Pascual Torres going back and forth for the lead until Rougeou secured the position in the closing laps. Lee Waddell completed the podium in the nine-driver category. Fourteen drivers competed in the TaG Heavy race as Jarret Bank drove away to victory by over 23 seconds. Gary Sircy was second with Richard Buckley in third. Jeff Hale won the Yamaha Sprint category, featuring five drivers. John Larue and Robert Hoskinson joined him on the podium. Mitch White added another win to his CV in the Formula 125 division, out running Jeff Metter and Allen Hollinger. Four drivers took to the track in Animal Sprint 390 as Ben Thomason scored the victory ahead of Rob Garland and Hank Hefner. The CIK LO206 Medium class was another close battle that was decided in the chicane coming to the checkered flag. Three drivers went in, only two came out with Trey Kelley crossing the line first ahead of Rob Garland. James Michael Sullivan slipped past a spinning Gary Campbell to finish third with Jeremy Yancey fourth and Scott Wentz fifth in the 13-driver field. 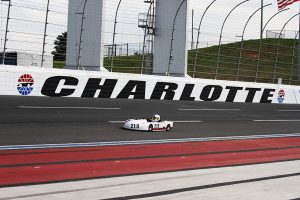 Dean Dybdahl was the overall winner in the shortened Race 6, scheduled to go for 45-minutes but ended after 25 due to a red flag. Dybdahl won the Junior Enduro category ahead of Josh Toth. Dick Charest won the Vintage Open class over Rick Gilmore. Dennis Griffth outlasted William Anderson and Bill Johnson in Vintage Piston Port/USA. The same for Joe Payne in the Yamaha Sportsman Heavy division, in front of Mike Collier and Lew Fehring. Gary Mikush was the lone driver in 100cc Controlled with Michael Hamilton the lone entry in 100cc Piston Port. 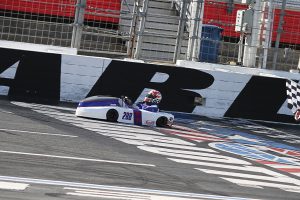 Race 7 completed the day with seven classes on track. The one that went down to the wire was in Clone Sprint 390 as Darren Greene was able to grab the victory ahead of Robert Garland at the line. Roy Lowom drove to third. Rob Garland won the CIK LO206 Heavy class in front of Glenn Smith. Maddie Ulm drove to victory in the Cadet LO206 division, outrunning Cale Darling. Junior LO206 had two drivers with Travis Varney picking up the victory with Cait Ulm in second. LO206 Sprint 390 was won by Adolph Grzyb with Todd Horton unable to finish. Margay Ignite Masters and Senior featured drivers jumping from the sprint track over to Road Race at the end of the day. Greg Mefford picked up the win in Masters ahead of Jon Clark and Timothy Smith. Bobby Krug was the lone driver in Senior, gaining a full practice race ahead of Sunday’s event which will see a full field of Ignite karts.

Despite the red flags on the day, with all the drivers walking away in the end, the race was kept on schedule and completed by 5pm. Everyone returns now on Sunday to do it all over again, with another chance at racing for the WKA Grand National Eagle.