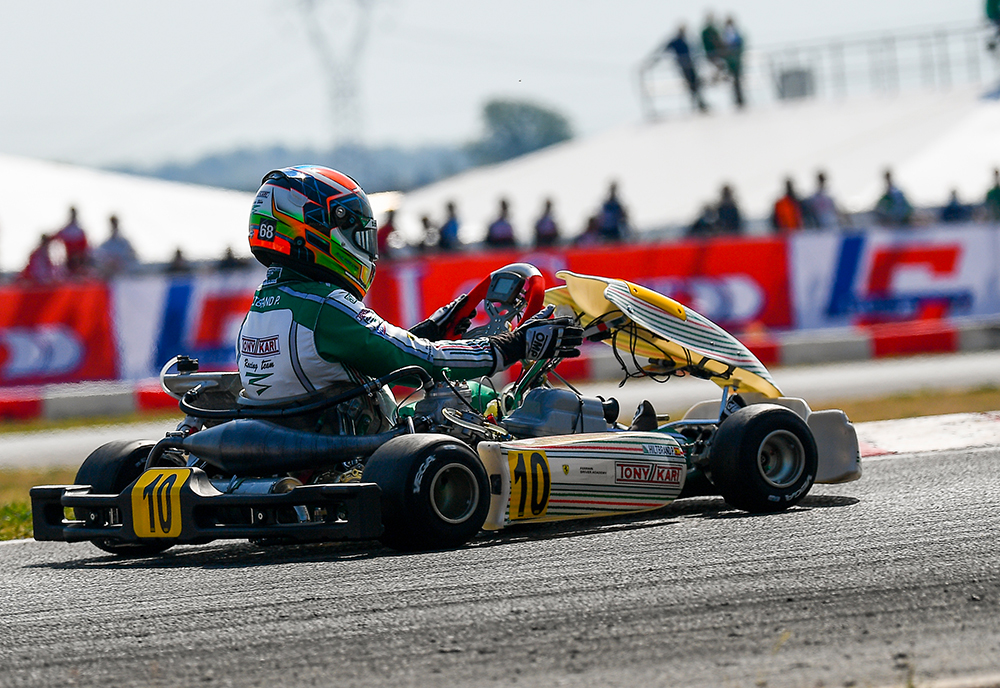 In the opening round of the WSK Euro Series, at the South Garda Karting of Lonato, two out of four are the categories in which our Racing Team reaches the top 3 list. Not only, in KZ2 class also with an amazing comeback of 23 positions.

The first WSK Euro Series appointment for our Racing Team is positive. At the South Garda Karting of Lonato, on Sunday, the day of finals, the expected rain was the protagonist, which made the pre-finals and finals more complicated. Our Tony Kart Racer 401R (for the KZ2, OK and OKJ categories) and our Tony Kart Rookie 2020 (for the MINI), as usual powered by the Vortex engines, showed off to be set-up at best in every track condition, both on dry and wet asphalt.

Extraordinary comeback in the KZ2 final for our Pedro Hiltbrand. The Spanish driver starts from the last positions of the starting grid after a particularly unlucky pre-final; nevertheless, despite the slippery asphalt due to the rain and the great number of rivals in front of him, Hiltbrand performs overtakes one after the other and climbs not less than 23 positions in just 17 laps. A performance that worths him a 3rd place under the chequered flag, rewarding Hiltbrand’s determination as well as the value of our material even under the rain.

Simo Puhakka grows steadily throughout the weekend, improving his ranking at the end of the eliminatory heats by 15 positions both in the qualifying sessions and in the general ranking. First appointment in the WSK Euro Series with our colours for Josef Knopp, who goes on with his familiarization within our team.

In OKJ, Harley Keeble is one of the favourite drivers for the final victory. The British driver jumps from the pole position, thanks to his victory in the pre-final, and holds the lead in the early laps, before engaging in a tight duel with a rival. At the end of 17 laps, Keeble crosses the finish line in 2nd place, with a win, three third positions and a fastest lap among the results of the eliminatory heats.

Alexander Gubenko is also in the top positions of the final, together with the Russian driver even 4th but who will finish in 6th place. A pity instead for James Egozi, close to the timings of his two teammates, but who had to stop in the pre-final when he was running 6th.

In OK category, luck is not on the side of the fast Joseph Turney. The British driver starts his weekend with our colours by signing the 6th place in the qualifyings, then climbing on the podium of the first eliminatory heat and gaining also a victory in the second one. With the wet weather making the driving more difficult, Turney shows great intelligence in the management of the pre-final thus finishing in 2nd position, a result which means the start of the final from the second row. Turney performs a good start, immediately places himself in 3rd place and stays close to the two rivals in front of him, however a problem unfortunately forces our driver to end the race early.

As a consequence, the lead is given to Tuukka Taponen, already leader two weeks ago on the occasion of the third round of the WSK Super Master Series. The Finnish driver avoids making mistakes and finishes the final in the top 5, concluding a good weekend. Alfio Spina is, again, our second best driver in the final and thus among the best ones of the category, while Bruno Del Pino, already at the start with our colours in some previous events, debuts once more with the Racing Team; the Spanish driver runs the final and scores a 3rd position in the qualifying heats, as best result.

In the MINI category, our Jimmy Helias gains two third places in the qualifying heats and quietly runs to category final. However, at the starting grid of the race the French driver is unlucky as he is hit by a rival and consequently goes off the track after the first curves. Helias doesn’t give up and starts a great recovery from the bottom, however this will not be enough to get back to the top of the ranking.

Tony Kart Racing Team will still be on track in two weeks, again at the South Garda Karting of Lonato, from April 22nd to 25th, on the occasion of the final round of the WSK Super Master Series.