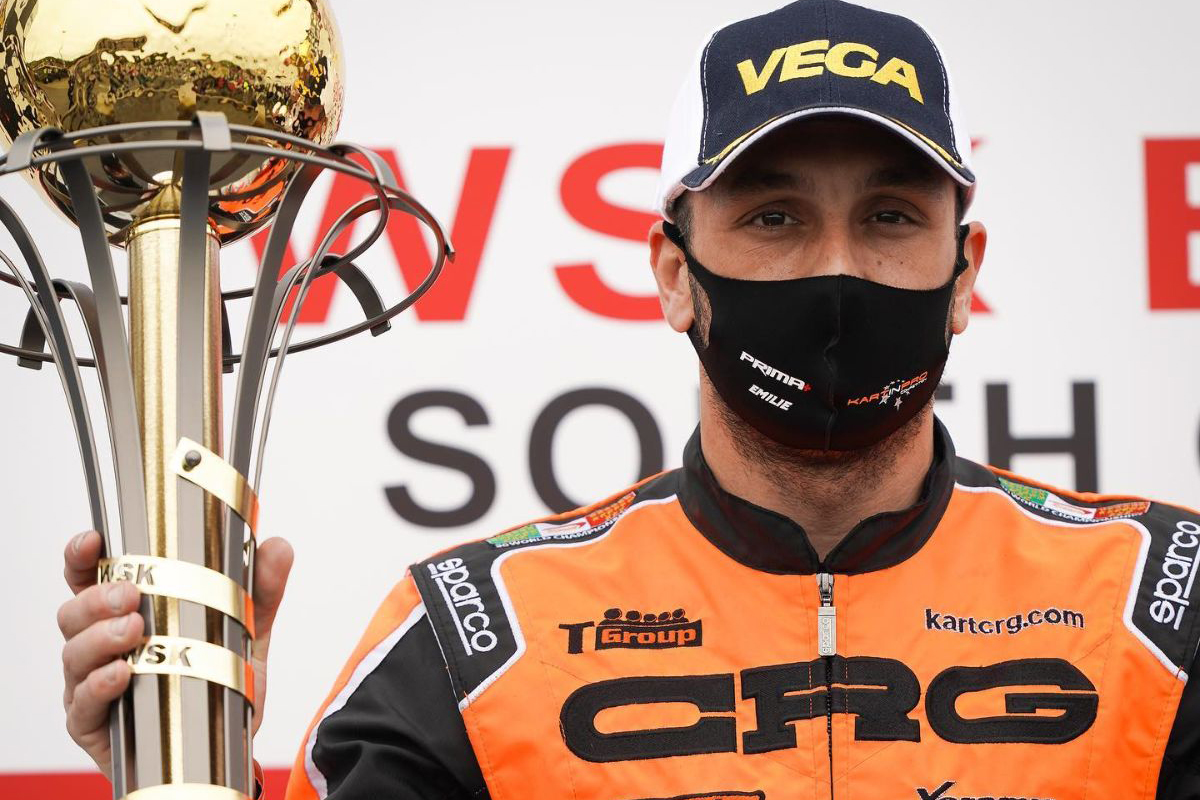 The weekend of the WSK Euro Series in Lonato has just ended and it has been characterized by the rain that heavily influenced the results of the final day on Sunday. Despite this, the Frenchman Jeremy Iglesias got an excellent second place in the final of the premier class, which represents the first podium for him with the CRG colors. His great performance in qualifying on a dry track, where he got 7th place overall after the heats, thanks to two 4th places and a 5th position, has shown how his feeling with the CRG technical material is constantly growing. On Sunday, even with the rain, he confirmed himself among the best, first with 2nd place in the prefinal and then securing a well-deserved podium.

Paolo Ippolito also stood out in the KZ class during qualifying with the dry racetrack, with 6th place in the general classification and then he was always among the fastest in the heats, where he obtained 3rd place in the first race, 4th place in the second and 2nd place in the last one. Unfortunately he did not find the same speed under the rain and in the final he was forced to retire, due to a race contact.

The same fate befell Jorge Pescador, while Alex Irlando had a spoiler penalty and for this reason he missed the top ten and Brandon Nilsson did not qualify for the final due to a contact.

It was a weekend of ups and downs also in OK, where Arthur Rogeon did an excellent job with the dry track in the qualifying phases, but on Sunday he had to retire during the first lap, due to a technical problem. Aleksander Bardas raced for the first time with the team and got 16th place in the final.

In the OK Junior category, Simone Bianco showed an excellent speed, obtaining 6th place in qualifying in his group, just 1 tenth from pole, and then continued in the heats with an excellent race pace. Unfortunately for him the rain on Sunday was not that lucky, as he was hit by another driver in the prefinal, thus missing the qualification. Maksymilian Obst also did not qualify due to some problems in the heats, that compromised his performance.

In the Mini class Gerasim Skulanov only joined the team on Thursday due to a problem with his VISA renewal and suffered a bit of delay in the qualifying stages, but in the last heats he showed as always a speed equal to the best drivers in the category. Also on Sunday with the rain, he proved to be very fast, but in the prefinal he suffered a double penalty for 2 race contacts, after finishing in 6th place, which prevented him from taking part in the final.

Mattia Prescianotto and Aleksandar Bogunovic kept up the CRG name anyway: the Italian got 7th place in qualifying in his group and Bogunovic 5th. Both were competitive in all the heats on the dry track and confirmed their speed also on Sunday with the rain. In the prefinal Prescianotto got 4th place and Bogunovic 5th position, while in the final the best was Aleksandar who finished in 9th place, in the top ten, with Prescianotto only 11th, due to a penalty for the spoiler, caused by a mechanical failure.

Now that the 1st round in Lonato has been archived, we will be back racing for the WSK Euro Series on 13th June in Adria. Meanwhile the last round of the WSK Master will take place again in Lonato on April 25th and the first trophies of the season will be awarded there.

Here some of the drivers’ comments:

Jeremy Iglesias: “I am really happy with this result and I would like to thank the whole CRG team. This is the first podium with this new family of mine and I hope it is only the beginning of a long series. We have worked hard since the beginning of the year and there’s no reason to lower our guard now because all the most important events of the season will take place shortly”.

Simone Bianco: “We have been fast all weekend since the free practive, confirming our performances also in qualifying and heats. Unfortunately with the rain on Sunday I got rear-ended in the prefinal and my race ended with a retirement. But despite this, I am satisfied with the way I drove and with the work done with the team. We now have a chassis that is easy to drive and, above all, we are fast in all conditions, both with used and new tires. I’m sure the long-awaited results will come soon”.

Gerasim Skulanov: “I am very disappointed with what happened in the prefinal. They inflicted me 20 “penalties, 5” of which due to the spoiler falling, caused by another driver who sent me straight on to another kart in front of me. This penalty is not proportionate to the episodes that challenge me and despite so many other contacts on the track, the same inflexibility has not been used with the other drivers. The track was impassable due to the rain, the driving conditions were really bad and in these cases some contacts are inevitable; I would have loved to bring home a good result, but I will have to postpone it to the next race. I am pumped and motivated to return the trust of the CRG team, which I would like to thank for the work done for me”.