Wet and Hard-Fought Finals at Opener of WSK Euro Series 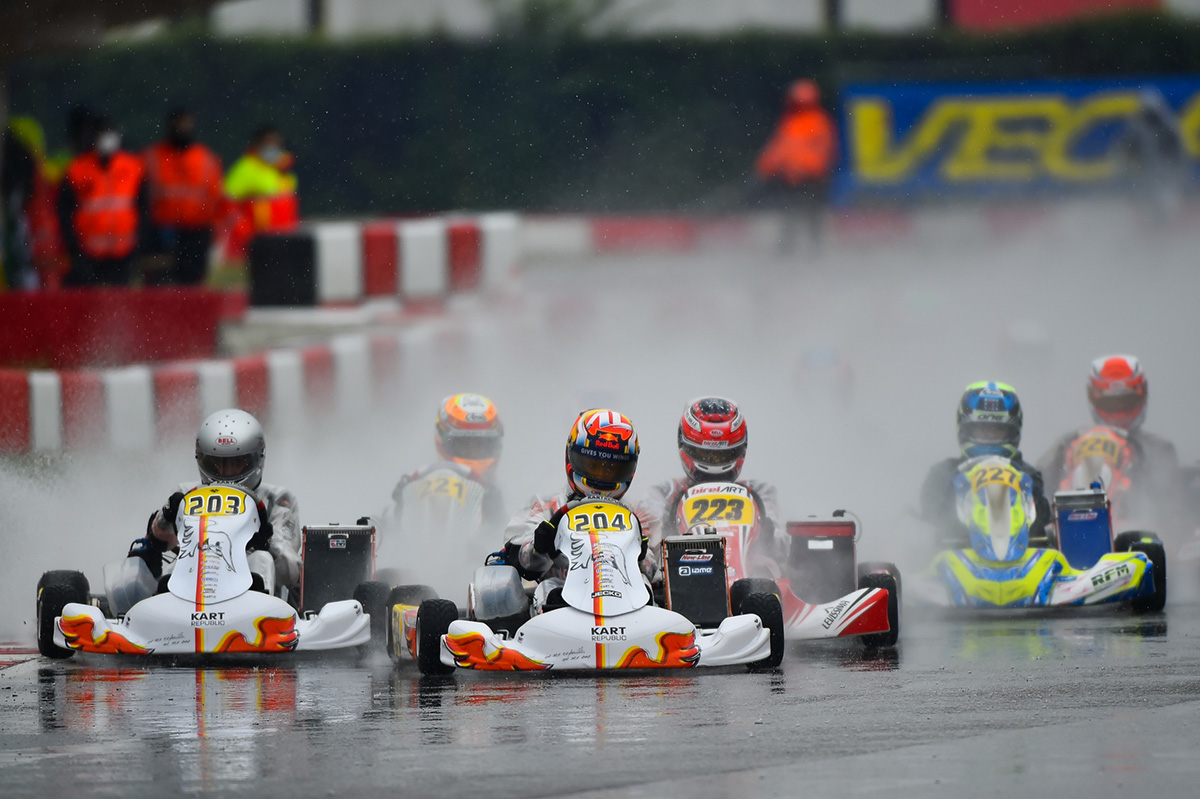 A thrilling finale took place at the South Garda Karting circuit of Lonato in occasion of the opener of the WSK Euro Series. The rain fell since this morning and made things trickier for the finalists of this important international karting event as 253 karting drivers gathered from 46 different countries.

After qualifying practice and the 42 heats run in ideal conditions, the rain fell during the final stages on Sunday and definitely highlighted the driving skills of a lot of the protagonists, but it also brought a few surprises.

The verdict of Prefinals.

The victory in the first of the two OK Prefinals went to the British driver Arvid Lindblad (KR Motorsport/KR-Iame), who was already on pole after qualifying and on top after the heats. Prefinal-B was deservedly won by the Italian Luigi Coluccio (Kosmic Racing/Kosmic-Vortex), who dominated the race after the second place in the heats.

In MINI the Pole Jan Przyrowsky (AV Racing/Parolin-TM Racing) surprisingly won Prefinal-A after an 11 place comeback. Another surprise came in Prefinal-B when the Thai Enzo Tarnvanichkul (Team Driver/KR-Iame) secured the win. The Asian Tiziano Monza (Sauber/KR-Iame) was among the excellent names out of the final instead.

Riccardo Longhi (BirelART Racing/BirelART-TM Racing) came to the fore in KZ2 winning Prefinal-A, while his teammate from Holland Marijn Kremers did the same in Prefinal-B building a lead of more than 13s on his closest rival.

In OKJ, Prefinal-A, was dominated by the aggressive driving of the British driver Harley Keeble (Tony Kart Racing Team/Tony Kart-Vortex). In Prefinal-B the driver from United Arab Emirates Rashid Al Dhaheri (Parolin Motorsport/Parolin-TM Racing) climbed all the way up from P8 to the win.

Lindblad confirms his lead of OK 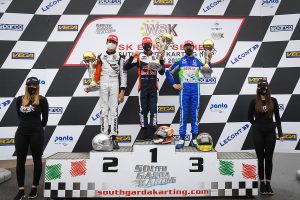 Great recovery and win for Pesl in MINI 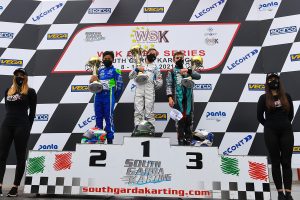 In MINI the Thai Enzo Tarnvanichkul (Team Driver/KR-Iame) led the race early on, but soon the lead was taken by the Czech Jindrich Pesl (Baby Race/Parolin-Iame), who had already claimed the pole position but slipped down the field in the heats. The duel among the two continued all the way to the flag, but Pesl crossed the finish line on top and was followed by Tarnvanichkul and the Italian Emanuele Olivieri (Formula K Serafini/IPK-TM Racing), who claimed a deserved P3. The Belgian Dries Van Langendonck (BirelART Racing/BirelART-TM Racing) secured a great P4 instead. The Dutch René Lammers (Baby Race/Parolin-Iame) recovered a stunning 22 places and ended fifth. 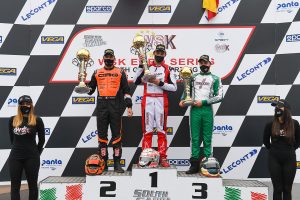 KZ2 lived on an infinite series of duels, but the Dutch Marijn Kremers (BirelART Racing/BirelART-TM Racing) pulled away in the Final. Behind him, a close battle was fought by his teammate Riccardo Longhi and the French Adrien Renaudin (Sodikart/Sodi-TM Racing). The two eventually were handed a penalty: 5s due to the misplaced front fairing for Longhi and 10s to Renaudin for unfair behaviour. The second place went therefore to the French Jeremy Iglesias (CRG Racing Team/CRG-TM Racing) and the third to an excellent Pedro Hiltbrand (Tony Kart Racing Team/Tony Kart-Vortex), who completed an amazing 23 places recovery. 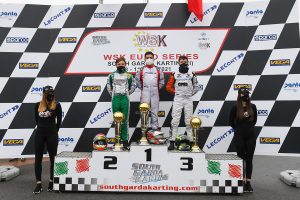 Another good battle was fought between the two winners of the OK-Junior Prefinals. Rashid Al Dhaheri (Parolin Motorsport/Parolin-TM Racing) eventually secured a great win in the Final, leading his closest rival, the Brit Harley Keeble (Tony Kart Racing Team/Tony Kart-Vortex). Some penalties due to the misplaced front fairings hit several OKJ drivers. The third place was in fact lost for this reason by the German Maxim Rehm (Ricky Flynn/Kosmic-Vortex) and the Russian Alexander Gubenko (Tony Kart Racing Team/Tony Kart-Vortex). P3 went therefore to the Italian Francesco Marenghi (Team Driver/KR-Iame), who recovered 8 places in the race.

The next round: WSK Super Master Series on April 25th in Lonato

The next WSK round is scheduled for April 21-25, 2021 at the South Garda Karting in Lonato. This is the fourth and closing race of the WSK Super Master Series.

The other rounds of WSK Euro Series 2021

The loan North American driver in the OK category was Ugo Ugochukwu, the recent signee to the McLaren Racing. Ugo qualified fifth and drove to finishes of 2nd, 5th and 1st in the heat races to improve his position to third. He held the position through Prefinal A, coming up short in the Final to land on the podium for the first time sense the WSK Super Master opening round.

Jamaican Alex Powell (KR Motorsport) was the lone driver in OKJ to make the main event. Powell was 18th after the heat races, improving up from 23rd in qualifying with four top-10 heat races. He advanced three spots in Prefinal B to start the main event from Row Six. Powell ran as high as P8, but crossed the line in 13th. His position improved to ninth in the final classification after penalties. Three others failed to make the main event with USA drivers James Egozi (Tony Kart Racing Team) and Kai Sorensen (Parolin Motorsport) along with French driver Enzo Deligny (Parolin Motorsport) retiring early in the Prefinal A race. Deligny, the 2019 Challenge of the Americas Junior ROK champion, came out of the heat races as the top driver in points after qualifying eighth and recording two heat wins. Deligny ran second for much of the Prefinal until two laps remaining when he retired. Sorensen, the 2021 SKUSA Winter Series X30 Junior champ, was 15th after the heat races, making one lap in the wet race. Egozi was 17th in the heat points to give all four North Americans a shot at the main event. His Prefinal race was cut short after three circuits.

The 2021 SKUSA Winter Series Mini Swift title winner Matias Orjuela (Parolin Motorsport) was the lone North American in the Mini Final. Orjuela was 16th after qualifying but one the opening heat race and finished top-seven in the other four to end up P7 in points. The Colombian was shuffled back six spots to 10th in the wet Prefinal A, starting the Final from Row 10. That is where he stayed during the 10-lap main event, ending up 18th. Canadian Jensen Burnett (Energy Corse) was unable to get through Prefinal B. Burnett was 26th in points, starting his Prefinal in 13th. He would be shuffled outside the top-20 after the opening circuit but climbed back up to 17th with two laps remaining. An issue on lap 9 dropped him back outside the top-20 again, and unable to transfer to the Final.