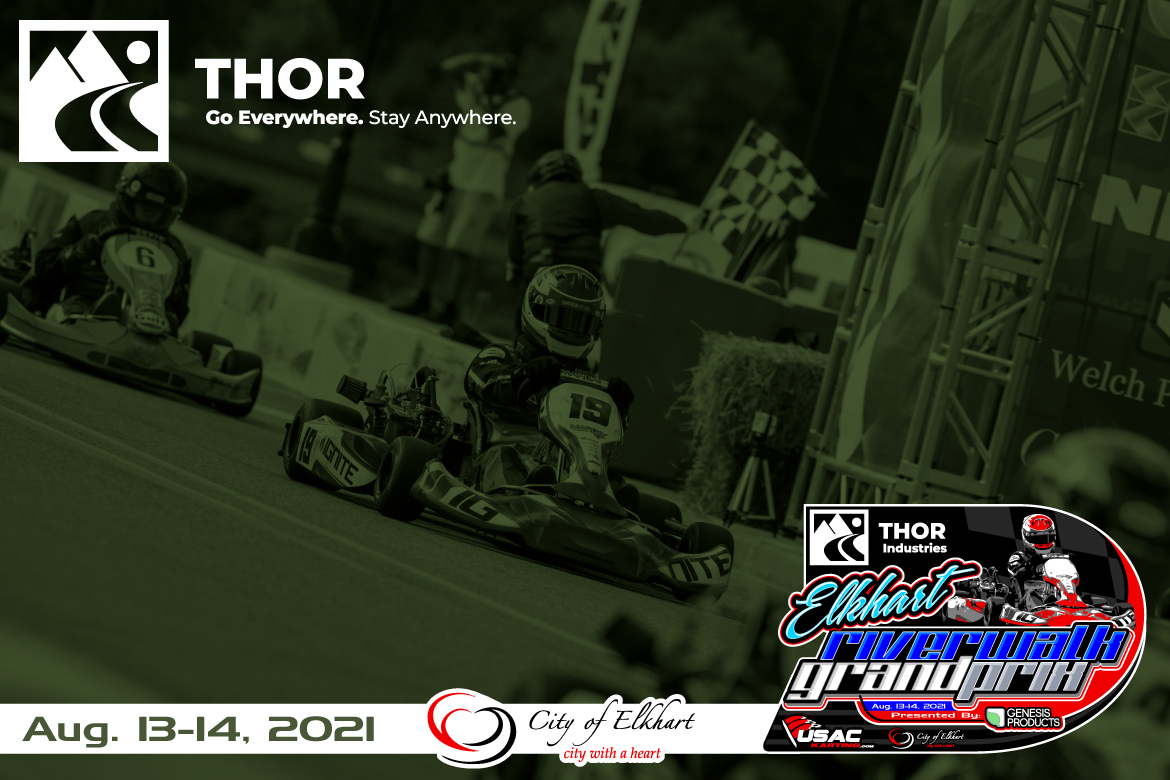 After taking a year off due to the Covid-19 pandemic, the Thor Industries Elkhart Riverwalk Grand Prix will return this summer on August 13th-14th. The extra time has given the City of Elkhart the opportunity to finish the renovation of Central Park and also finish construction on the Jackson Street Bridge.

As we move forward from 2020 and the country steadily reopens, we’re welcoming back live music, the cornhole tournament, a fireworks display that rivals the 4th of July, and the return of the kart race through the city streets. The Thor Industries Elkhart Riverwalk Grand Prix has steadily become one of the must-attend karting events in its first three years. In 2019, the event saw Tony Neilson score an astonishing eight wins in nine classes throughout the weekend as well as Chase Allard sweeping both of the ABC Excavating Shifter Duels. In starting a new tradition in Elkhart, the 2019 Grand Prix saw the karts taking to streets on Friday night for the first time. Along with returning to the streets at night, the drivers will be welcomed by new Mayor Rod Roberson, a new permanent concert stage, and the redeveloped Central Park that sits between the front stretch and the pit area.

“After a year of waiting, we’re excited to be returning to the streets of Elkhart. This is not your typical race where you arrive, race, and leave. We want to continue to give everyone an event at which memories are created. This has traditionally been a family-oriented festival where a race takes place,” explains Mike Burrell. “The competitors and their families can enjoy the concerts alongside the fans during the entire event without having to leave the track. Our focus has always been to entertain as well as provide a family friendly environment to enjoy racing at. At times, it’s easy to forget that there is a race going on in the city with atmosphere that this event creates.”

As announced in 2019, all classes are now running under the CIK body and seat rules. The class structure for the event remains very similar to the 2019 event. The 2021 running will see Briggs and Stratton Heavy CIK class return as well as the Masters and Junior classes. Also returning for their second year, the Margay Ignite Senior and Masters classes will be battling under the lights both days as the Margay Ignite Shootout will also return on Friday night. On the 2-cycle side of the class structure, the Yamaha can classes along with the 125 shifter class will return as well as the USAC FK100 class that debuted at the 2020 Battle at the Brickyard.

The event kicks off on Friday, August 13 with practice, qualifying, and special events starting in the early evening along with the first of two free nights of concerts. Saturday sees a multitude of on and off-track activities. On Saturday August 14, the Premium Concrete Cornhole Tournament kicks off, practice and qualifying races continue throughout the early part of the day, the Thor Industries celebrity races open the event followed by the USAC Karting feature events during the late afternoon into the evening, finishing with the second of the free concerts and a fireworks show closing the event on Saturday night after the final checkered flag flies.

Stay up to date by following USAC Karting on Social Media and www.USACkarting.com www.Elkhartgp.com

Thank you for following USAC.