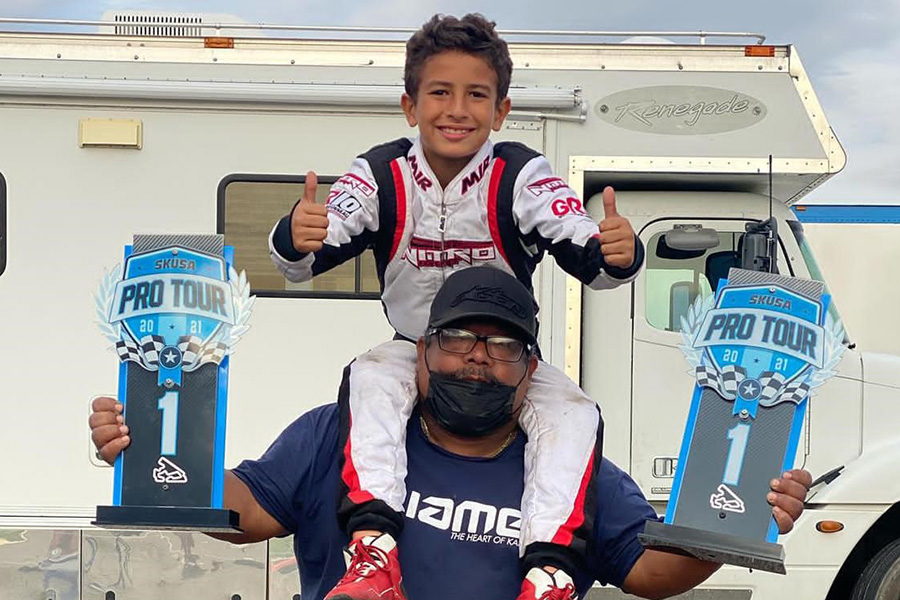 The victories continue for Team Nitro Kart as they traveled south to NOLA Motorsports for the opening round of the Superkarts! USA Pro Tour. The 2021 edition of the SKUSA WinterNationals were held on the March 26-28 weekend in New Orleans and the 10 drivers under the Team Nitro Kart tent were greeted with wet weather to begin the weekend before skies cleared up until rain returned on Sunday to make things intense and exciting for everyone in Avondale, Louisiana. 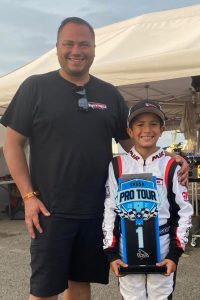 Two of the wins for Team Nitro Kart came in the youngest category of the series, Micro Swift. A total of five drivers competed aboard the Nitro Kart Cadet chassis on the weekend, including Gianmatteo Rousseau out of Panama. Rousseau was among the quickest throughout the entire event, including the qualifying session for Round One on Saturday with a 1:09.977 lap. A wire-to-wire win in the Prefinal kept him on the pole position for the main event. He would run second for much of the race, crossing the line as the provisional runner-up with the overall fast lap. A penalty to the winner promoted Rousseau to the top step of the podium, giving him his first SKUSA Pro Tour victory. The only session Gianmatteo was not P1 was qualifying in Round Two on Sunday as he was just one tenth short of clinching the pole position. A hard-fought Prefinal saw Rousseau come out as the winner to claim another main event pole. Conditions changed with rain coming before the Final, and Rousseau showed off his wet track skills, leading all 15 laps to a commanding 4.7-second advantage. Gianmatteo now leads the SKUSA Pro Tour standings after two rounds of competition.

Standing on the podium as well in Micro Swift was Keelan Harvick. The SKUSA Winter Series champion had an up-and-down weekend in NOLA. Harvick qualified sixth, only to be shoved off the track at the start of the Prefinal, ending up 22nd. The second-generation driver put on an amazing performance in the Final as he advanced 16 positions in 18 laps to place sixth in his SKUSA Pro Tour debut. Harvick kept himself in the top-10 through the early portion of Sunday, qualifying fifth and then drove to the win in the Prefinal, only to be penalized for contact, dropping him to seventh on the grid for the main event. Harvick was the quickest driver on the wet track in the Final, advancing up to second, where he would take the checkered flag for his first SKUSA Pro Tour podium result.

The third victory of the weekend for Team Nitro Kart came from one of its newest members in Connor Zilisch in X30 Senior. The 2020 FIA Academy Trophy champion joined the team at the start of 2020, and continued his winning ways. Zilisch was among the top contenders all weekend long. He qualified ninth for Round One action, and drove his way up to fourth with fast lap of the race in the Prefinal. A slight extension of the rear width was found in post-race tech, thus dropping him to the tail of 39-driver field. An amazing drive from the back of the grid toward the front was on display in the Final by Zilisch. In the 20 laps, Connor improved 33 positions to end up sixth, including fast lap of the race. The pace continued over to Sunday, in both the dry and the wet. A fast lap of 1:02.109 gave him the pole position before the rain came in the Prefinal. In the wet, he showed off his wet-weather skills with another fast lap honor that pushed him out to a seven-second advantage. The track dried up for the Final, and a great battle was had that included a handful of drivers. Zilisch dropped to fifth at one point, but worked his way back up toward the front, taking the lead as they took the white flag and he then held on for his first SKUSA Pro Tour victory in the X30 Senior division.

Fellow North Carolina driver Hayden Jones joined Zilisch in the X30 Senior division, coming off a strong rookie season in the Senior ranks. It was not the opening weekend Jones hoped for heading into the weekend with some confidence following the opening races of the 2021 season. Hayden struggled in qualifying each day, 25th overall but managed to advance forward against a stacked field. He went up to 19th on Saturday and finished 20th on Sunday. 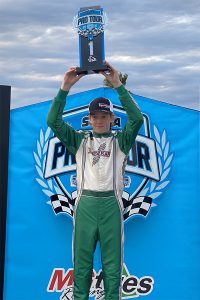 Third year Mini Swift driver Ben Maier was among the quick drivers all weekend in NOLA. The Maryland racer qualified third for Saturday’s opening round, but was shuffled back on the first circuit of the Prefinal. He fought back to get up to seventh, and continued moving forward to fifth in the Final with fast lap of the race. Sunday began with Maier in ninth after qualifying, holding the position through the eight-lap Prefinal. Following the rain conditions in between, Maier found some needed speed to knife his way forward in the Final. Maier took over the lead on lap 11, leading at the white flag. A hard-fought battle on the last lap had Ben come up just short at the line, placing runner-up.

Arizona driver Ashton Woon put in a solid weekend overall to begin his second season at the SKUSA Pro Tour in Micro Swift. Woon began with a P7 in qualifying and worked his way up to second in the Prefinal. He would end up going the wrong direction in the 18-lap Final, placing ninth for his best SKUSA career finish. Ashton improved on that in Sunday’s action, clocking in the third quickest lap of qualifying before dropping two spots to fifth in the Prefinal. A great fight during the main event saw Woon miss out on the podium by one position, ending up fourth for a new career-best in SKUSA competition.

Making his first SKUSA Pro Tour start, Louisiana driver Davin Roberts recorded two top-15 results on the weekend in Micro Swift. Roberts ran as high as eighth on Saturday before placing 15th in the Final. Sunday saw Roberts qualify 15th, and then hold that position for much of the day. Johnie Stamps from California made his SKUSA Pro Tour debut in the Mini Swift class. Stamps improved his position each day after qualifying, ending up with 14th on Saturday and 15th on Sunday. The Moreno brothers of Agustin and Alejandro from Panama also made their first SKUSA Pro Tour starts. Agustin competed in the Micro division with Alejandro in Mini Swift. Both were unable to complete the full distance in their main events on the weekend, but continued to improve their pace with each session on the track.

A busy month of April is ahead for Team Nitro Kart as the race team will be trackside three times over four weeks. The month begins April 9-11 with the Stars Championship Series at the Nitro home track of GoPro Motorplex in Mooresville, North Carolina. Next is a trip over to the Charlotte Motor Speedway for the WKA Manufacturers Cup Series event on April 15-18, followed by the second stop for the United States Pro Kart Series on April 30-May 2 at the New Castle Motorsports Park.