Five Championships for OTK Products in 2021 Challenge of the Americas 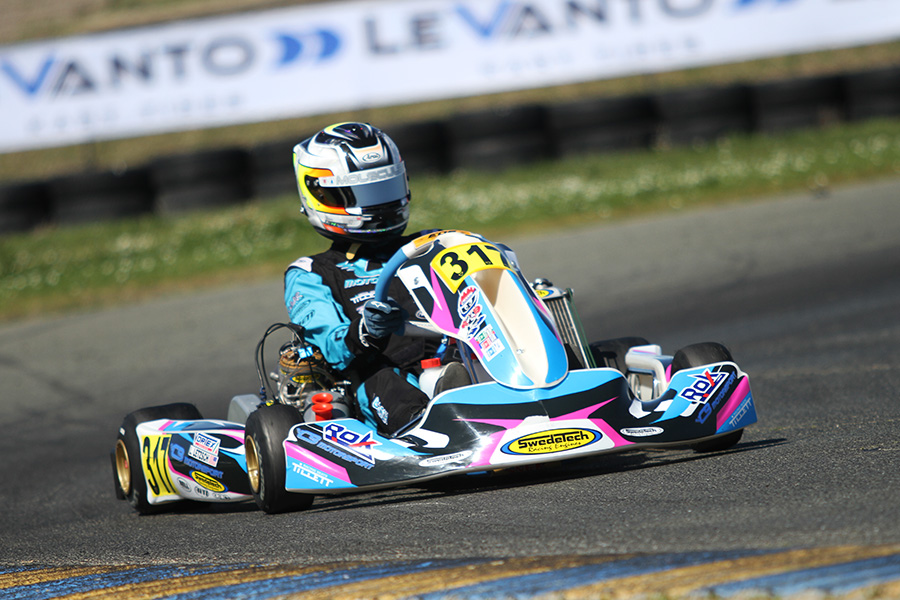 The first quarter of the 2021 season is now in the books this calendar year. Back in January, OTK race teams, kart shops and competitors from all over the western half of the United States began competing for Challenge of the Americas victories and championships. The series finale was held at the Sonoma Raceway in Sonoma, California on the March 26-28 weekend. Beautiful clear, sunny skies greeted over 100 competitors on the weekend, with a large majority of these races utilizing the quality and consistency of OTK products. In total, seven victories were earned by drivers on OTK chassis, extending to 20 podium finishes and 34 top-five results over the two days in six of the categories run in the COTA program. When the final checkered flag had waved on Sunday, OTK took home five of the series’ championships. 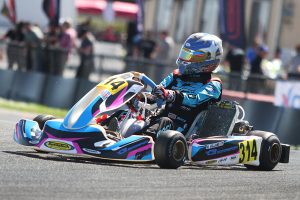 Two victories and two championships went home with Liam Letzsch (CB Motorsports / EOS). Letzsch made series history in becoming the first driver to win two championships in the same season in the 14-year history of the Challenge. Letzsch posted a fifth victory in the Senior ROK category on Sunday to celebrate the class championship. Teammate Macy Williams (CB Motorsports / EOS) beat him to the line on Saturday for the class win, placing second on Sunday to earn the vice-champion honors in the final standings.

Letzsch won for a second time in the Senior 100cc division on Saturday to help secure the provisional championship on the year. Letzsch’s win was in a photo finish ahead of Kyriakos Sioukas (Alex Keyes Racing / EOS), while Michael Michoff (SpeedSense Motorsports / Exprit) finished fifth. Williams outgunned and edged Letzsch for the class victory on Sunday, earning her first win of the season. Michoff improved to third ahead of Sioukas and Jacob Hoover (Alex Keyes Racing / EOS) to make it an OTK sweep of the top-five. Sioukas joined Letzsch on the championship podium in the second spot with Williams ending the year in third. 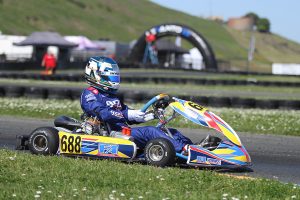 A total of two wins and a two championship came for OTK in the single-speed Masters divisions. Derek Wang (EOS) made history, becoming the first three-time champion in the 14-year history of the Challenge while also completing them in a row. Wang overcame a DNF in Round Five on Saturday to sweep the action on Sunday, earning his fourth victory of the year to clinch the title. OTK earned four of the top-five in Saturday’s main event, led by Tim Meyer (HRT / EOS). Local driver Georgious Georgiou (Tony Kart) stood on the podium with David Pergande (JH Motorsports / Tony Kart) in fourth and Billy Cleavelin (SpeedSense Motorsports / Tony Kart) in fifth. Sunday’s race saw the order shuffle around behind Wang with Georgiou up to second and Meyer down to third. Pergande ended the year matching his Saturday finish of fourth. Joining Wang on the championship podium was Meyer, placing third in the final standings.

Like Wang, Mike Smith (VMI / EOS) secured a championship with a victory in the final round. Smith led the way on Saturday for OTK drivers, placing second in the main event with Tim Meyer (HRT / EOS) in fourth and Dana Estes (Ryan Perry Motorsport / Tony Kart) in fifth. Sunday saw Smith come from behind, securing the lead in the second half of the race and going on to earn his first victory of the season. The win locked up his first Challenge championship. Brian Phillipsen (MMK / Redspeed) stood on the podium in third with Estes up to fourth. It was a clean OTK sweep of the top-three in the championship chase led by Smith, with Meyer in second and Phillipsen earning the third most points in the best-of-five format. 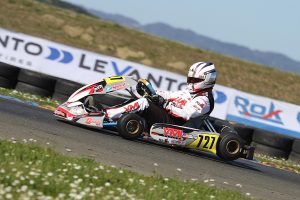 Mike Smith locked up his first Challenge championship in Masters 100cc with a victory in Round Six (Photo: eKartingNews.com)

The seventh different victory on the weekend in Sonoma for OTK products came in Junior 100cc. Stephen Eisert (SpeedSense Motorsports / Exprit) recorded his first win of 2021 on Saturday, joined by Christian Cameron (Alex Keyes Racing / Tony Kart) on the podium in the third position. Cameron was the only OTK driver to finish inside the top-five on Sunday, ending a wild main event in the fourth position. The championship chase went down to the wire with Lanie Benjamin (Speed Factory / Tony Kart) ending up two points ahead of Cameron for her first series championship.

Ryan Yop (Tony Kart America / Redspeed) and Cliff Kujala (Pure Karting / Tony Kart) were the top two OTK drivers in the Shifter Masters ROK division. Yop drove his way to a second podium finish on the year, placing third on Saturday while Kujala came home in fourth. The duo fell one position in the Sunday main event, with Yop fourth and Kujala fifth. A string of six top-five results, along with four podium finishes, helped Kujala earn the vice-champion honors in the final point standings. 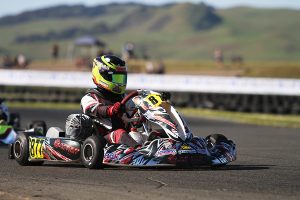 Lanie Benjamin secured the Junior 100cc championship, helping to give OTK five of the titles in 2021 (Photo: eKartingNews.com)

Many of the same OTK drivers, teams and kart shops will continue on into the summer month, competing in the upcoming California ROK Championship program, promoted by the same FTK Promotions group that put on Challenge of the Americas. The five-event, six-round series begins on May 7-8 at the Buttonwillow Raceway Park in Buttonwillow, California, followed up with a trip to Sonoma Raceway on June 12-13.