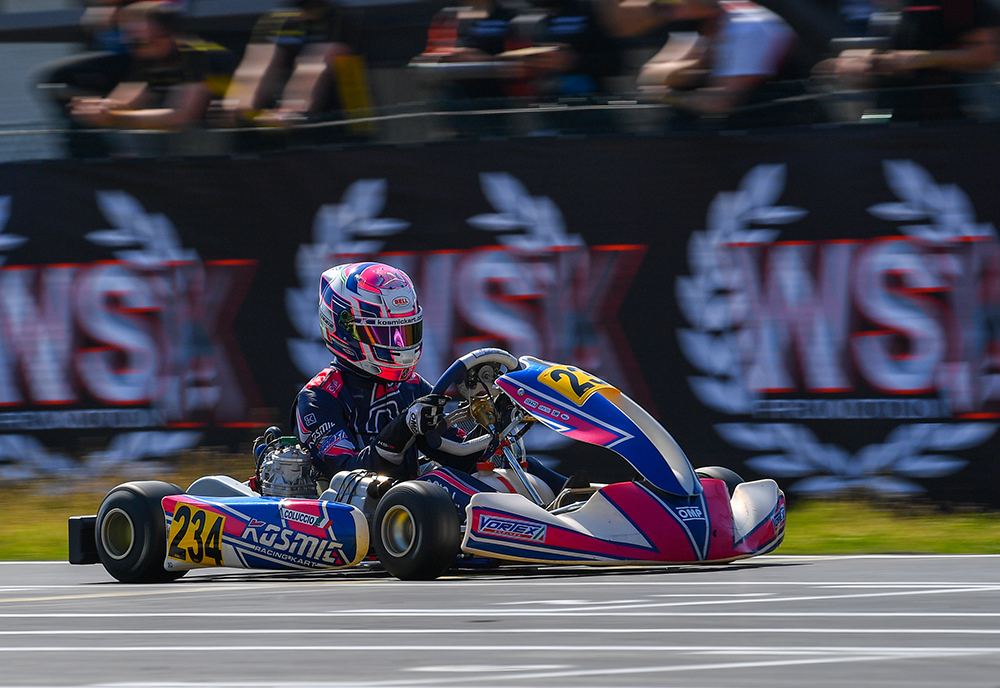 Excellent recovery for Luigi Coluccio in the OK final with our Racing Department, on the occasion of the third round of the WSK Super Master Series. Dion Gowda is the fastest driver in the OKJ qualifyings with the Ricky Flynn Motorsport.

After the turning point of the championship, the Kosmic Kart Racing Department faces the third round of the WSK Super Master Series 2021 in Sarno. On the International Naples Circuit, our team shows off its Kosmic Mercury R chassis in OK and OKJ categories, equipped with the DST and DJT Vortex engines.

In OK category, Luigi Coluccio is back on track after the forced break due to his positive COVID-19 test, on the occasion of the last event at the La Conca track. The Italian driver is back full of energy for the third round of the championship. The results and his climbing skills confirm it: three top 10s in the qualifying heats (with a 4th place as best result), a comeback of 14 positions at the end of the qualifying heats and, again, a comeback of 17 positions in the final. Coluccio, with this performance and several overtakes, enters the circle of the best 15 drivers of the decisive Sunday race.

Sebastian Gravlund continues to gain confidence with our materials and stands out with clear improvements in the Friday and Saturday’s heats. The Danish driver scored a +17 on his schedule at the end of the eliminatory heats, but in the pre-final he is forced to stop. Also Jakub Rajski keeps on growing within our Racing Department, improving his ranking both in the qualifying and heats.

In OKJ category, three are the Kosmic Kart chassis entering the final of the category. Freddie Slater, with the Ricky Flynn Motorsport, ends his race in the top 10, while Dion Gowda distinguishes himself since the beginning of the weekend with the fastest lap in the Friday’s qualifying, in front of more than 80 participants, which gives him the absolute pole position of the category.

In two weeks, the Kosmic Kart Racing Department will still be the protagonist at the South Garda Karting, hosting the first appointment of the WSK Euro Series (April 8th-11th).