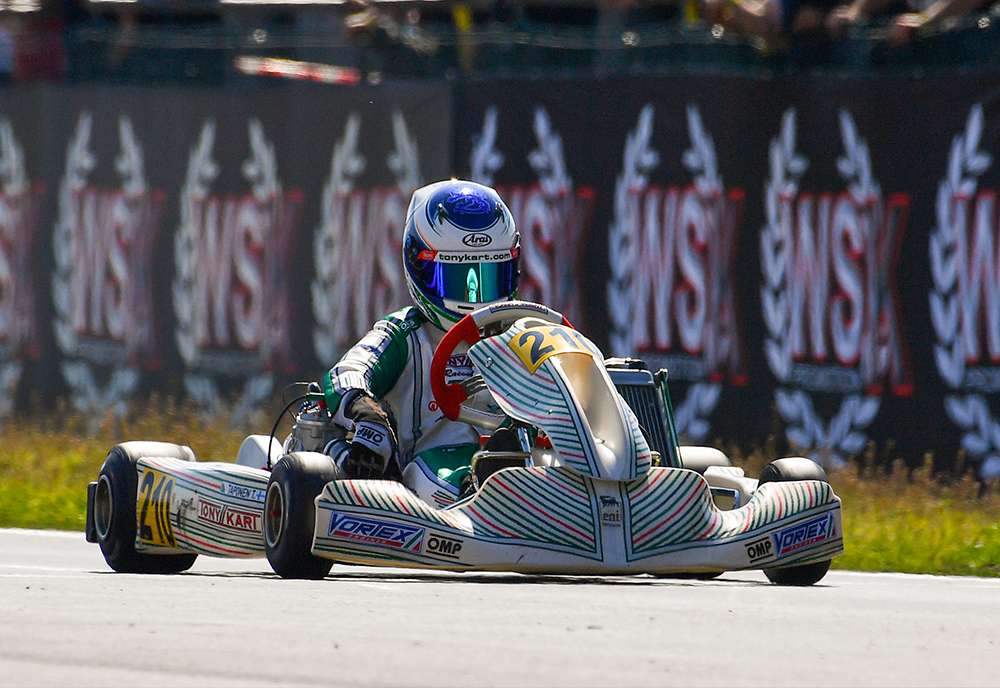 Second position for Tuukka Taponen in the final of the OK category, on the occasion of the third round of the WSK Super Master Series, with our Racing Team. Good performances also in KZ2, OKJ and MINI categories.

The Tony Kart Racing Team faces for the first time the new layout of the Naples International Circuit, theatre of the third round of the WSK Super Master Series 2021 season. A challenge that does not frighten our Tony Kart Racer 401R chassis (for the KZ2, OK and OKJ categories) and Tony Kart Rookie 2020 (for MINI class), equipped with Vortex engines, able to get a podium and several good performances in the finals of all the four categories.

In OK, Tuukka Taponen is one of the protagonists of the category throughout the weekend. The Finnish driver takes the podium twice in the qualifying heats, gets the 2nd position in his pre-final and the 2nd in the final, with two positions gained compared to the starting grid. This result launches Taponen to 3rd place in the overall championship standings.
Alfio Spina is our second best driver in the final. The Italian driver grows steadily in the qualifying heats with a comeback of not less than 19 positions between qualifying and heats, and then enters the top 10 both in the pre-final and in the final; unfortunately, he is forced to serve a penalty, but Joseph Turney inherits his 10th place. The English driver in the pre-final is unluckily involved in an accident that affects the final, where he recovers not less than 8 positions. A result which is below expectations considering that in the qualifying heats the English driver obtains a podium and a fast lap.

Our Simo Puhakka, who has always been running at the top during the whole weekend in Sarno, almost reaches the podium of the KZ2 final. The Finnish driver gains the 3rd best time in the qualifying and, in the three eliminatory heats, he achieves a victory and a 2nd place. In the pre-final, Puhakka is able to have the bes on his rivals and finishes 2nd  focused on the decisive race: a few collisions spoil the performance of our driver, who is anyway among the best five of the event.
Good performance also for Pedro Hiltbrand, in the top 10 of the Sarno final. The Spaniard is constantly growing in this season and this is confirmed by the three days of races: two top 5 positions in the heats, a 4th one in the pre-final and, as said, a placement among the best ten of the category in the decisive race on Sunday. Gilles Stadsbader and Josef Knopp continue their learning path within our Racing Team, with several comebacks during the weekend.

In OKJ, Harley Keeble repeats his comeback of a two weeks ago, between qualifying and heat. The British driver has recovered not less than 15 positions in the general ranking, a result that makes him one of the strongest “climbers” of the weekend, a feature confirmed by the top 10 he got in the final on Sunday. James Egozi hits the final together with his teammate Keeble. the bad luck strikes Alexander Gubenko, at his second race with our Racing Team after the excellent performance in La Conca. The Russian driver stops in the pre-final and can’t repeat the top 10 of the previous championship round.

In the MINI category, Jimmy Helias (whose results are currently sub judice) signs the pole position of the Friday’s qualifying and confirms to be fast also in the eliminatory heats, where he conquers a victory. With a 3rd position in the pre-final, the French driver fights for the success in the final and, in a sprint, enters the top five drivers of the race; a growth that bodes well for the next rounds in 2021.

The good performance of Tony Kart chassis is also confirmed by the bearers of the Ward Racing team, who both in OKJ category (with Maksimilian Popov) and in OK (with Artem Severiukhin) get a second and a third place in the final, respectively.

The Tony Kart Racing Team will be back on track in two weeks, from 8th to 11th April, on the occasion of the first round of the WSK Euro Series hosted at the South Garda Karting, reserved for the OK, OKJ and MINI categories only.