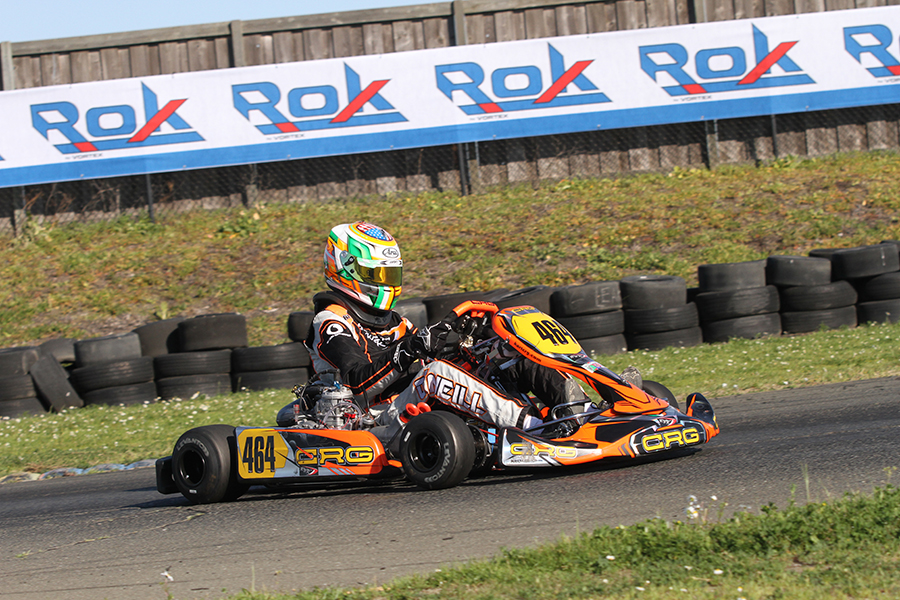 The sixth and final round of the Challenge of the Americas presented by Royce & Baxter completed on Sunday at the Sonoma Raceway. Sunday welcomed a third straight day of clear skies and warm temperatures for the final day of competition at the Sonoma, California facility, deciding the champions for the 14th season of the program. Tickets to the ROK Cup Superfinal and ROK the RIO were on the line. A handful of championships were decided prior to the checkered flag, while others needed to go the extra time with title winners decided after the on-track action was completed.

The race victory in the SwedeTech Shifter ROK was among those races decided after the checkered flag. Aiden O’Neill (RWR / CRG) once again was quickest in qualifying with a 43.059 lap time. Championship leader Kyle Wick (GFC) was only 62 thousandths off in the session, and put the pressure on early in the Prefinal. O’Neill was able to hold off wick for the win in the 14-lap race to start on the pole position for the main event. The start of the final saw O’Neill grab the hole shot and lead the field through the opening lap. Contact between Wick and Enzo Prevost (RWR / CRG) put the NorCal driver Prevost off the course. Prevost rejoined the circuit and slowed, waiting for the lead group to come back around. Everyone watching knew what was coming, and Prevost allowed O’Neill past and darted in front of Wick. Prevost slowed the pace of Wick, who slammed in the back of the now lapped kart and then later going into turn two. Wick basically put Prevost off the course, however the damage was done as O’Neill was able to get away. 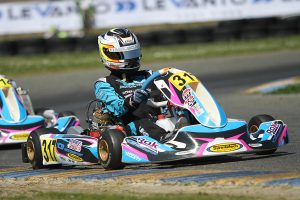 At the same time, Saturday winner and 2020 champion Hunter Pickett (GFC) was overcoming a Prefinal stall at the start. Beginning the Final in P13, Pickett was into the top-five early. He continued moving forward and took over second on lap nine. From there, Pickett ran down O’Neill and took over the point on lap 13. From there, Pickett led the remainder of the race for the provisional victory. A penalty for passing under yellow took the win away from Pickett, handing O’Neill the top spot and his first Challenge victory. Wick was running third for much of the race, until he pulled off with two laps remaining with a mechanical issue. That promoted Jacob Gulick (GFC) to second, his best finish of the year and Cole Shade (GFC / Trackmagic) in third, another first podium of the year. Pickett was classified fourth with Dustin Salaverria (RWR / CRG) with his best finish of the year. The championship was locked up for Wick despite the DNF in Round Six, with Remo Ruscitti (IM USA / Italkart) in second and Gulick moving into third thanks to his final two rounds.

The championship was already locked up in the Ruthless Karting Senior ROK division with Liam Letzsch (CBM / EOS) securing the title with his runner-up on Saturday. Letzsch capped off the championship performance with a victory in Round Six. He was able to hold off teammate and Saturday winner Macy Williams for the victory, his fifth of the year in the category. 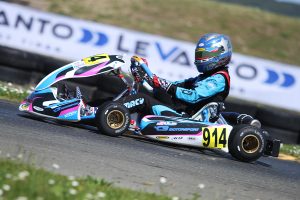 Letzsch (CBM / EOS) provisionally clinched the Forward Direction Motorsports Senior 100cc championship as well, making him the first driver in Challenge history to claim two titles in the same year. With the title in hand, the focus was just on winning Sunday. Letzsch started the day in fifth after qualifying as Alex Siragusa (FW / GFC) edged out the field for the fast time in qualifying. Letzsch and Macy Williams (CBM / EOS) teamed up in the Prefinal to go 1-2, dropping Siragusa to third. At the start of the Final, Williams was pushed down to fourth by Siragusa and Kyriakos Sioukas (AKR / EOS). Williams fought back to reclaim the second spot by lap four. From there, she stayed on Letzsch’s bumper to push the duo away from the rest of the field. Williams waited for the final circuit, and was able to get to the apex first at the inner hairpin. From there, she held off Letzsch to the checkered flag by 28 thousandths of a second to claim her first victory in the category. Michael Michoff (SSM / Exprit) charged forward in the Final with fast lap of the race to move up to third, dropping Sioukas off the podium to fourth with Siragusa fifth – until a two position penalty for contact was issued after the race. That promoted Jacob Hoover (AKR / EOS) to fifth. 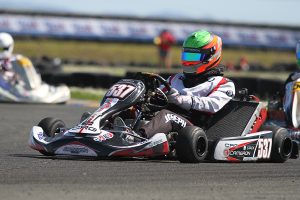 Lap traffic played a factor in the victory for the Ron White Racing Shifter Masters ROK class. Point leader and Saturday winner Kevin Woods (RWR / CRG) was the driver to beat all day. Woods set fast time and won the Prefinal. In the Final, Woods established a good lead with Neil Joseph (Cameron / CRG) running second. Joseph kept the gap close enough to put the pressure on Woods to be perfect. On lap 18, Woods attempted to lap a kart when that driver slowed the pace of Woods going into the new turn two section near tic-tac-toe. Joseph took advantage, slipping past both Woods and the slower kart. Woods tried to attack back on Joseph for the lead, but the attempts would fail. At the line, Joseph secured the victory with Woods in second, missing out on a fourth win. The finish did however secure the championship for Woods, making it two titles in a row. Adam White (GFC) had his best performance on the year, landing on the podium in third. Ryan Yop (Redspeed) was fourth with Cliff Kujala (Pure / Tony Kart) in fifth. 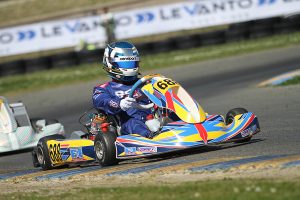 History was made in the Odenthal Racing Products Masters ROK division. Two-time defending champion Derek Wang (EOS) came into the day needing to finish at least fourth in the Final to secure a record third-straight title. The lead challenger Adam Kasick (FDM / CompKart) started on the outside of the front row. As the field went through the opening corner, Kasick got sideways and turned around 180 degrees in front of the field. His spin also collected Billy Cleavelin (SSM / Tony Kart), ending both their chances at racing for the win. This allowed Wang to have the pressure of the championship off, and focus on the win. Local driver Georgios Georgiou (Tony Kart) kept close to Wang through the early laps of the Final. Eventually, Wang was able to gap Georgiou to secure a fourth victory on the season. Timothy Meyer (HRT / EOS) drove to third with David Pergande (JH / Tony Kart) in fourth. 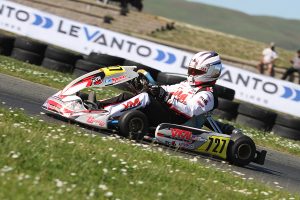 The championship in the M2 Masters 100cc class was still up in the air with Mike Smith (VMI / EOS) and Timothy Meyer (HRT / EOS) fighting it out. Carlos Calderon (Aluminos) took the five bonus points from both in qualifying, but the heated Prefinal saw just about everyone make contact, including Calderon, Smith, Meyer and Ian Koentges (FDM / CompKart). Meyer was the driver to cross the line first, but after the penalties were handed out, Koentges was named the winner and started on the pole position with Calderon back to fourth behind Smith and Meyer. The action continued into the main event with Calderon attempting a pass on Meyer at the inner hairpin. The two made contact and both went off track, taking each other out of the race. Koentges led for the first half of the race until Smith was able to take control. From there, Smith drove on to earn his first victory of the season, and secure the championship. Brian Phillipsen (MMK / Redspeed) drove to third with Dana Estes (RPM / Tony Kart) fourth and Preston Newberry (FDM / CompKart) in fifth. 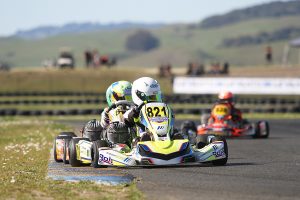 No one could have scripted how the Italkart Junior 100cc category played out both on the track and off the track. Alex Rantala (RWR / CRG) used his home track knowledge to claim the fast time in qualifying. Rantala would get moved down to fourth in the Prefinal as Cooper O’Clair (J3 / CompKart), Saturday winner Stephen Eisert (SSM / Exprit) and Round One winner Christian Cameron (AKR / Tony Kart) led the way. For much of the Final, it was O’Clair and Eisert at the point. O’Clair secured the top spot on lap 12, and held on while Cameron positioned himself into the second spot. On the final circuit, Eisert first moved past Cameron for the second spot. It looked as if O’Clair had enough to reach the checkered flag first. Eisert got off the final corner perfect, and charged alongside O’Clair for a photo finish at the line. With O’Clair celebrating early, Eisert got enough of a run to line first by seven thousandths of a second. The provisional victory helped to move Eisert into the top spot for the championship. Following tech, Eisert was removed for an issue with the engine. That took the victory away along with the championship, dropping him to fourth in the standings. O’Clair was named the winner, becoming the sixth different driver to win in the six different rounds. Cameron was second, but a two position penalty for contact took him off the race podium, moving Rantala to second and Preston Lambert (GFC) to third. Alex McPherson-Wiman (FDM / CompKart) completed the top-five. The penalty to Cameron was very crucial, as that penalty took away valuable points in the championship. Cameron came up two points short as Lanie Benjamin (SF / Tony Kart) was named the series champion, becoming only the second female driver to earn a title at the Challenge. 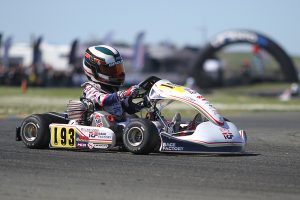 A fifth victory on the season for John Antonino in Mini ROK (Photo: EKN)

John Antonino (Race Factory) added to his championship performance in the GFC Mini ROK class, earning a fifth victory on the season. Nico Sarphati (GFC) stopped him from sweeping the action on Sunday, setting fast time in qualifying. Antonino would edge out Sarphati for the win in the Prefinal, and then went wire-to-wire in the main event for the victory by over six seconds. Nixx Eggleston (Race Factory) came out in third with Cypress Andruss (GFC) fourth and Gavin Whitt (FDM / CompKart) completing the top-five. 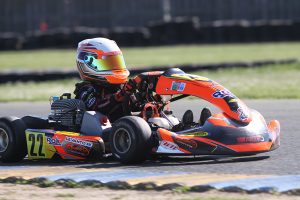 Victory in the final round was the exclamation point to the championship performance for Jaxon Porter (Ruthless / Nitro Kart) in the Empire Karts Micro ROK. Troy Ferguson (Benik) was looking for his first victory of the year, pacing the field in qualifying and winning the Prefinal ahead of Porter. The two pulled away from the rest of the field with Ferguson showing the way for the first 12 laps of the 16-lap Final. Ferguson made a final charge on the final circuit, and at the checkered flag, coming up 47 thousandths short. Porter earned his third victory of the season and claimed the championship. Rhys Bowman (FDM / CompKart) won the battle for third ahead of Mateo Calderon (Aluminos) and Julian Sanchez (GFC).

The 14th season for Challenge of the Americas presented by Royce & Baxter is now complete and in the books. The champions in the Senior ROK, Shifter ROK, Shifter Masters ROK, Masters ROK, Junior ROK and Mini ROK will represent the series and Team USA at the ROK Cup Superfinal in Italy later this year. The other champions all earned a ticket to compete at the ROK the RIO event this November in Las Vegas. Plans are in the works already for what should be another record-setting season in 2022 for the Challenge.