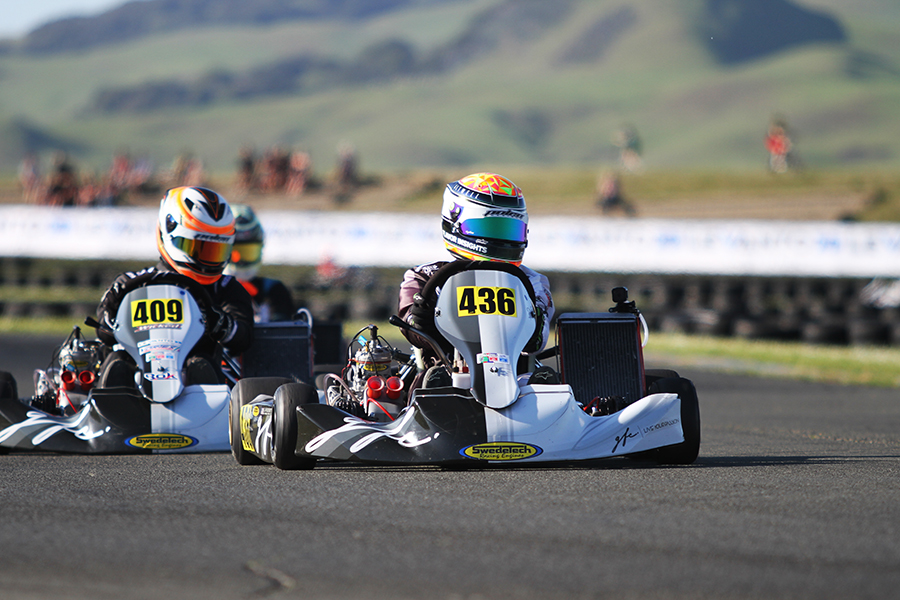 The Challenge of the Americas presented by Royce & Baxter began its finale event at the Sonoma Raceway facility in Sonoma, California. Round Five took part on Saturday in the nine categories to further shape the championship chase. A perfect day of racing welcomed the over 100 competitors with sunny skies all day. Today’s results helped to shape the championship chases for the good of some, and still on the outreach of others. 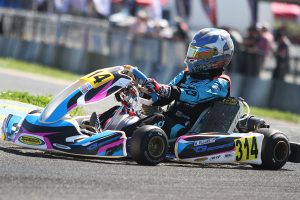 The Swedetech Racing Shifter Rok division appeared to be controlled by Aiden O’Neill (RWR / CRG) after he secured fast time in qualifying and won the Prefinal. O’Neill fought to control the lead in the Final, eventually passed by defending champion Hunter Pickett (GFC) and Kyle Wick (GFC) along with Enzo Prevost (RWR / CRG). The top three ran away from the field with Pickett setting the pace and holding off Wick for the victory, his first of the season. Prevost completed the podium in third with Jacob Gulick (GFC) climbing from last on the grid to fourth with Remo Ruscitti (IM USA / Italkart) fifth until a penalty dropped him to 14th, moving Keawan Tandon (GFC) to fifth. 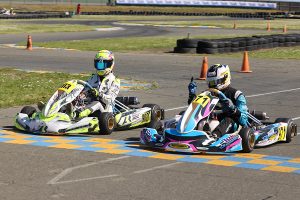 The Ruthless Karting Senior Rok had only two drivers in the field with point leader Liam Letzsch (CBM / EOS) and Macy Williams (CBM / EOS). Letzsch led the majority of the day with Williams striking on the final circuit. Williams took over the point and was able to fight off Letzsch for the top spot, securing her first victory of the season with Letzsch in second.

Letzsch (CBM / EOS) was able to secure the top spot in the Forward Direction Motorsports Senior 100cc class. Letzsch, coming in as the championship leader, took home the five bonus points for quick lap in qualifying and grabbed all 10 points for the win in the Prefinal ahead of teammate Macy Williams (CBM / EOS). Contact at the start of the 20-lap Final pushed Williams back in the field with Letzsch and second in points Kyriakos Sioukas (AKR / EOS) able to get away from the field. Letzsch led with Sioukas on his bumper all race long, waiting until the final circuit. A slight mistake out of the final corner allowed Sioukas to get a run for a drag race to the line. At the checkered, the timing loop said Sioukas had won by four thousandths of a second, while the official called in a visual win for the 971 of Letzsch. The official results would put Letzsch as the winner and Sioukas in second. Eddie Shimmon (GFC) won the fight for third in his return to action for the first time in 2021, beating out Alex Siragusa (FW / GFC) and Michael Michoff (SSM / Exprit). 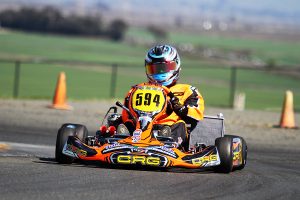 Ron White Racing Shifter Masters ROK point leader and defending champion Kevin Woods (RWR / CRG) did exactly what he needed to remain on top of the points heading into the final round, scoring maximum points on Saturday. Woods was able to sweep the entire day, never relinquishing the top spot from qualifying to the checkered flag for this third straight victory on the year. The fight was for second with Neil Joseph (Cameron / CRG) holding off Ryan Yop (Redspeed) to make it a Sonoma sweep on the podium. Round Two winner Cliff Kujala (Pure / Tony Kart) held second for a time but fell back to fourth, just ahead of Round One winner Michael Valiante (IM USA / Italkart). 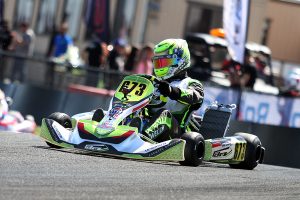 Adam Kasick came out as the winner in Masters ROK, his first of the season (Photo: EKN)

The day looked to be all Derek Wang (EOS) in the Odenthal Racing Products Masters ROK division. The championship leader controlled qualifying and the Prefinal, while on his way to victory in the Final until the chain broke at the halfway point. That promoted Adam Kasick (FDM / CompKart) to the top of the order, who was getting chased by Billy Cleavelin (SSM / Tony Kart). Cleavelin made a slight mistake, making him spin and thus giving Kasick some breathing room. Kasick would go on to score his first win of the season and help tighten up the championship chase versus Wang. Timothy Meyer (HRT / EOS) drove to second with local driver Georgios Georgiou (Tony Kart) completing the podium in third. David Pergande (JH / Tony Kart) and Cleavelin completed the top-five. 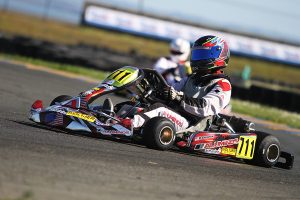 A second win on the season for Carlos Calderon (Aluminos) in the M2 Masters 100cc class. At his home track, Calderon scored maximum points on the day as we swept the action, never relinquishing the top spot. Championship leader Mike Smith (VMI / EOS) kept him honest, pushing Calderon the entire 20-lap distance to a good points finish in second. His championship rival Timothy Meyer (HRT / EOS) fought with Ian Koentges (FDM / CompKart) for the third spot. Eventually, Koentges took control of the position to earn his first podium finish in the category. Dana Estes (RPM / Tony Kart) completed the top-five. 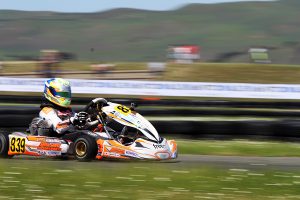 The Italkart Junior 100cc class welcomed its fifth different winner on the year. At first, it was Cooper O’Clair (CompKart). The main event was fight between O’Clair and top qualifier Stephen Eisert (SSM / Exprit). Eisert started back in fourth and quickly ran down O’Clair to fight for the top position. Despite their fighting, they maintained a solid advantage to make it a duel to the finish. As they approached the white flag, a yellow flag was waiving in turn one for a incident. Eisert was already in a defensive line to turn one, while O’Clair went around on the outside, making the pass for the lead through the yellow flag. O’Clair held the lead through the final lap and was the provisional winner, until a three-second penalty was handed to him for passing under yellow. That promoted Eisert to the top of the podium, moving O’Clair to second. Round One winner Christian Cameron (AKR / Tony Kart) wrecked toward the end of the Prefinal, and fought his way from 17th to the third step of the podium, beating out Preston Lambert (GFC) for the position. Tristan Young (VemmeKart), the 2021 Junior ROK champion, drove to fifth in his Junior 100cc debut. 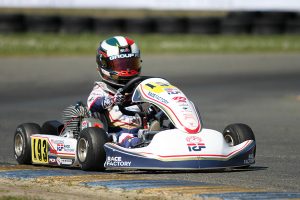 For a fourth time on the year, John Antonino (Race Factory) claimed the top step of the podium in the GFC Mini ROK division. Antonino put in a perfect day, earning maximum point to help his championship bid with a sweep in the action. From qualifying to the final checkered flag, Antonino held the P1 position, driving away to a five-second advantage in the Final. The fight was for second with Nico Sarphati (GFC) crossing the line with the position, only to be handed a two-position penalty for jumping the start. That promoted Nixx Eggleston to the second step of the podium with Gage Korn making it a Race Factory sweep of the podium. Sarphati was dropped to fourth with Cypress Andruss (GFC) completing the top-five. 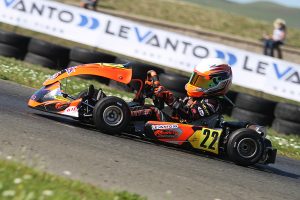 A second victory on the year for point leader Jaxon Porter in Micro ROK (Photo: EKN)

The Empire Kart Micro ROK class went down to a photo finish. Championship leader Jaxon Porter (Ruthless / Nitro) did what he needed to do, set fast time in qualifying and win the Prefinal. In the Final, Sonoma favorite Mateo Calderon (Aluminos) brought on the fight for the victory. The two broke away from the field and fought to the very end for the top spot. Porter fought him off with a defensive line around the circuit, but Calderon was able to get a solid run off the final corner for a drag race to the line. At the checkered, Porter won the race by only 13 thousandths ahead of Calderon. Rhys Bowman (FDM / CompKart) was unable to start the main event after stalling on the pace lap. He came from eighth to third, recording the fast lap of the race. Julian Sanchez (GFC) drove to fourth with Jerome Rondeau (Race Factory) in fifth.

The final day of action is set for Sunday at Sonoma Raceway as the championships and tickets to the ROK Cup Superfinal and ROK the RIO are on the line.