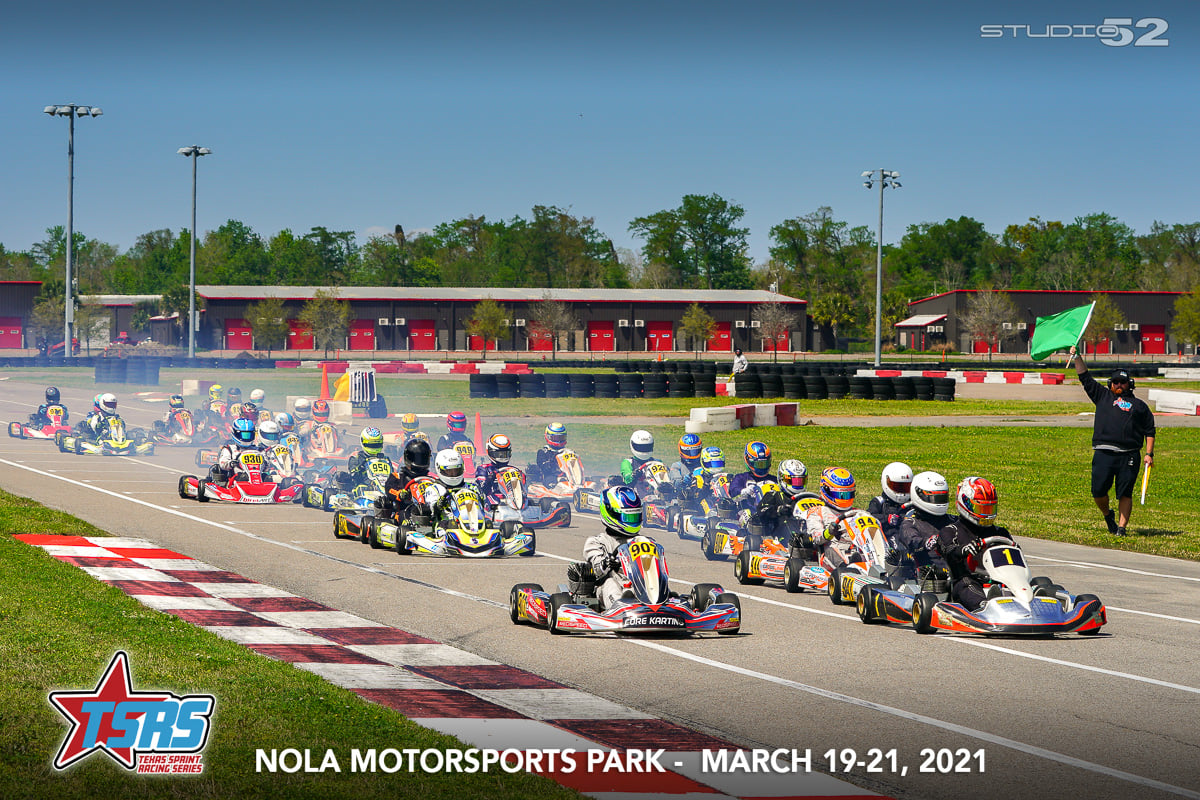 The seventh season for the Texas Sprint Racing Series Presented by Texas Barge kicked off on the March 20-21 weekend with its ‘Winter Warm-up’ event held at the NOLA Motorsports. A record total of 177 entries filled out the 12 categories at the Avondale, Louisiana facility for a perfect weekend of racing. Weather was sunny yet had colder temperatures over the two days, providing for a great atmosphere throughout the paddock. A handful of racers used the weekend to warm-up for the Superkarts! USA Pro Tour WinterNationals while the series welcomed a number of new drivers who are set to campaign the entire program.

The largest division on the weekend was KA100 Senior presented by Exertech, featuring 34 drivers. Josiah Tracy secured the fast lap in qualifying, posting a 1:05.286-second lap to clear the field by over two tenths of a second. Tracy was shuffled back to fifth in the opening heat race as defending champion Austin Osborne came away with the win. Osborne stayed out front in Heat #2, leading all 10 laps. The 18-lap Final saw a solid battle with Osborne and Reilly Cann going back and forth until lap 12. Peyton Phillips took over at that point until Osborne returned back to the lead. Tracy was able to move back up to third in the meantime, and then into second at the white flag. On the final circuit, Tracy able to work past Osborne for the lead and the victory. Osborne settled for second with Phillips in third. Adrian Cruz and JD Lamping completed the top-five. 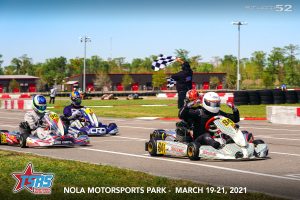 Three categories had sweeps on the weekend, including the 206 Senior class presented by 4T Concrete. Qualifying had six drivers within 83 thousandths of a second as Adrian Cruz set a fast lap of 1:12.810. Cruz led the way through both heat races, leading each 10-lap race to win. Cruz was followed by Jeff Dolian in the Final for the first 16 laps. Dolian took over at the white flag, leading to a duel on the final circuit. At the line, Cruz edged out Dolian by 23 thousandths. Macon Moore won the battle for third ahead of Zander Rogers and Pierce Baldus.

It was Baldus who swept the Open Shifter presented by Amarillo Kart Circuit. Baldus never put a wheel wrong to set fast time in qualifying, led each of the heat races, and he then wire-to-wire in the Final. Tim De Belloy drove to second with Freddie Milne in third. 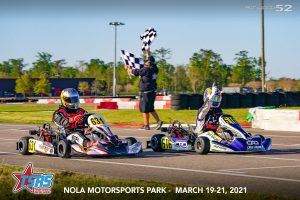 Miguel Mier had the final clean sweep of the weekend, winning the KA100 Master presented by Kart Racing Solutions. Mier’s 1:06.646 set fast time in qualifying and after battling with DJ Ortiz in the opening heat race, he scored the win. Mier went wire-to-wire in the 10-lap Heat #2, leading another 18 laps in the Final for the victory. Defending champion Doug Foxworth won the fight for second ahead of Brandon Strayer. Edwin Ruiz de Val and Alan Trout completed the top-five.

It was a near sweep for Luke Lange in X30 Senior presented by Crosslink Competition. Lange posted a 1:02.551-second lap to set the mark in qualifying, two tenths quicker than any other driver. Lange led most of the opening heat race, only to have defending champion Branyon Tiner edge him out for the win. In Heat #2, Lange came back to lead all 10 laps to start the main event from the pole position. Tiner put on the challenge in the Final, as he and Lange went back and forth throughout the 18-lap race. In the end, Lange reached the line first for the victory. Tiner was second with Cole Morgan third. Reilly Cann and Massimo Sanchez-Lara were fourth and fifth. 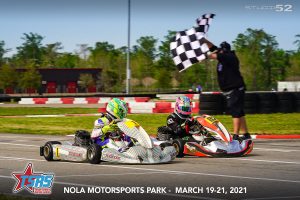 There was a similar result in X30 Junior presented by International Mechanical Services with Carson Morgan. The 2020 SKUSA Pro Tour champion set fast time in qualifying and won Heat #1. An issue in Heat #2 put him on the sideline after the opening lap, allowing Camryn Reed to take the win. Morgan fought forward in the 18-lap Final, taking the lead and then drove away to a sizable victory. Cole Kleck won the battle for second ahead of Leonardo Hassan, as Reed retired after lap five.

Morgan earned two victories on the weekend, standing on top of the podium in KA100 Junior presented by Fullerton Motorsports as well. The 2020 SKUSA Pro Tour champion edged out Aden Rudolph in qualifying by just 89 thousandths. After Morgan led wire-to-wire in the opening heat, Helio Meza was able to score the win in the second heat. The main event was an exciting 18 laps, featuring a lead change nearly every circuit. Morgan was able to establish himself as the leader with three laps remaining, showing the way to the checkered flag. Meza came up 41 thousandths short at the line with Cole Kleck joining them on the podium. Cooper Shipman and Davis Cunningham completed the top-five. 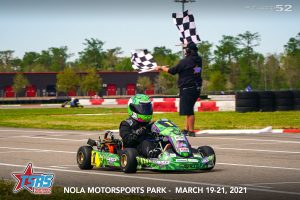 The 206 Junior presented by Core Karting rounded out the Junior level classes, featuring 13 drivers. Vinnie Meskells was the driver to beat for much of the weekend, as he set fast time in qualifying and won both heat races. Each race, Meskells was challenged for the top position, and in the main event, he was pushed back to third early by Phillip Winegeart and Caiden Wolfe. Winegeart led the majority of the race with he and Wolfe exchanging the top position. At the checkered, Winegeart edged out Wolfe for the provisional victory until he was assessed a five-second penalty for a start infraction. That moved Wolfe to the top of the podium with Winegeart down to second. Meskells joined them on the podium as Alex Pope beat out Jenson Harrell for the fourth position.

A total of 20 drivers filled out the 206 Cadet presented by Saville Electric, mixing the Mini and Micro aged competitors together. SKUSA Winter Series champion Keelan Harvick set the pace in qualifying before defending series champion Ragan Saville took control. Saville led all 10 laps in both heat races before going wire-to-wire in the main event. Harvick drove to the second spot with Gianmatteo Rousseau in third. Matthew Dukette was fourth with Robert Arana in fifth. 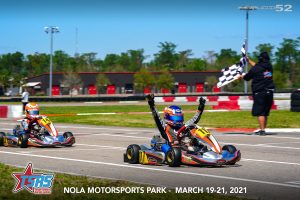 Saville began the weekend as the driver to beat in the Mini Swift class presented by Alan Rudolph Racing Academy. He set fast time in qualifying, just edging out Santiago Duran by 95 thousandths. Fifth in the session was Oscar Iliffe. It was Iliffe fighting his way forward in Heat #1 to score the win. Iliffe came back to score the win in Heat #2 to lead the 15-driver field to the green flag for the main event. Four drivers made up the lead group in the 16-lap Final with Iliffe joined by his brother Jack Iliffe, Duran and Tyler Roberts. Duran led the opening lap until Oscar took back the position. Jack led for a lap as well, but the point was controlled by Oscar for much of the race and more importantly at the checkered flag. It was a 1-2 Iliffe finish with Oscar earning the victory and Jack in runner-up. Roberts joined them on the podium in third with Duran fourth. Diego Guiot rounded out the top-five.

Keelan Harvick added to his hardware total for the 2021 season, winning the Micro Swift category presented by PFX Storm Shelters. The only blemish on the weekend was in Heat #1. After securing the quickest time in the qualifying session, Bobby Klein edged out Harvick for the win in the opening heat. Harvick fought back in the second heat, reaching the line first for the win. Harvick was able to break away early in the 16-lap Final, driving to a five-second victory. Gianmatteo Rousseau drove to second ahead of Klein. Jackson Baldus was fourth while Gage Bailey was fifth. 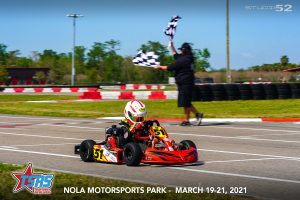 The Honda Kid Karts by A&M Excavating welcomed eight drivers at NOLA. Tanner Barsch and Pasha Ali were the top two drivers all weekend. Ali was quickest in qualifying while Barsch won the opening heat. Ali came back to win Heat #2, setting up for a great battle in the main event. Barsch made it uneventful, jumping out to a solid lead early and leading all 10 laps. Ali settled for second with Reagan Dudley rounding out the podium. Aloy Steinbrunner and Noah Gibson completed the top-five.

The season continues for the Texas Sprint Racing Series with the Spring Roundup, scheduled for April 16-18 at the North Texas Kartway in Denton, Texas.