This weekend hosts the series finale for Challenge of the Americas presented by Royce & Baxter. ROKkers from across the western half of North America will visit the Sonoma Raceway on March 26-28 to contest Rounds Five and Six to complete the 14th season of the program. The Sonoma, California was scheduled to be the series finale in 2020 until the COVID-19 pandemic hit the country and the world. That forced the series to cancel the event. Despite that, this weekend marks the 10th time the Challenge has visited the Sonoma circuit, with more than 100 drivers set to compete over the three days. 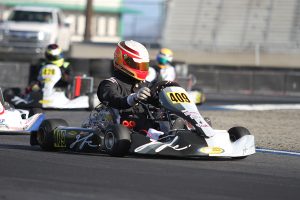 This weekend at Sonoma marks the first time for the Challenge utilizing the Pro-National layout. The 7/10-mile, 10 turn layout in the clockwise direction eliminates the famous tic-tac-toe section of the track. Unofficial practice is taking place Wednesday and Thursday with official practice beginning on Friday. Five sessions are provided for the 10 categories competing with a separate round of racing on Saturday and Sunday, including qualifying, Prefinal and Final.

eKartingNews.com is proud to be providing the 10th season of Trackside Live program with Challenge of the Americas. Veteran announcer Tim ‘Chappy’ Chapman will be calling the action all weekend from Sonoma. Those unable to attend can listen in to the live broadcast – presented this weekend by Courtney Concepts, CRG Nordam and the Allen Berg Racing Schools. Bookmark www.ekartingnews.com/live2 and follow the EKN social media channels for more throughout the weekend in California. 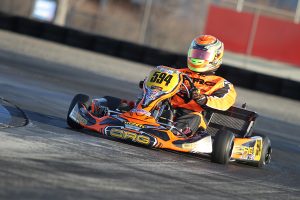 Championship is on the mind for a handful of drivers entering the Sonoma weekend with the series counting the best five of six rounds toward the title standings. Each and every session will be key for those fighting for the crowns, and prizes. Champions in the Shifter ROK, Shifter Masters ROK, Senior ROK, Junior ROK, Masters ROK, and Mini ROK all receive a ticket to the 2021 ROK Superfinal in Italy. Title winners in Micro ROK, Senior 100cc, Junior 100cc and Masters 100cc take home a ticket to ROK the RIO in Las Vegas this November, which includes entry, tires, fuel and oil. Each driver also receives one set of LeVanto tires. Vice-champion in all categories earn a ROK the RIO entry (fuel and oil included) with third place in each division receiving a ROK the RIO entry.

The gap is only five points between the top two in the Shifter ROK standings. Round Four winner Kyle Wick (GFC) holds the edge over two-time winner Remo Ruscitti (IM USA / Italkart). Each have three podium finishes with Wick placing runner-up to Ruscitti in both of his wins. Ruscitti placed third in Round Three as both finished outside the top-five in their fourth race. Jacob Gulick (GFC) has an outside chance sitting third in the points. Locals could be the wildcard with Aidan O’Neill (RWR / CRG), Anthony Freese (Birel ART) and Phillippe Denes (GFC) among those looking for the top step of the podium instead of championship points. 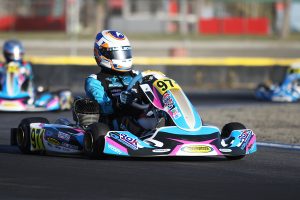 Liam Letzsch has a chance to win two championships this year in Senior ROK and Senior 100cc (Photo: EKN)

The difference between first and second in the Shifter Masters ROK standings is less, with only three points separated the top-two. Defending champion Kevin Woods (RWR / CRG) jumped up to the lead in the standings after his two win performance at CalSpeed. He jumped over Round Two winner Cliff Kujala (Pure / Tony Kart) and Round One victor Michael Valiante (IM USA / Italkart). Woods has three podium finishes while Kujala has four, including two runner-up and a third-place finish. Valiante has only one other podium finish, needing a big weekend in Sonoma to contend for the title. Wildcards in the chase include very fast local drivers in Ryan Yop (Redspeed), Patrick O’Neill (RWR / CRG) and Michael Guasch (PRG / Italkart) all with hundreds of laps around Sonoma.

The championship is wrapped up for Liam Letzsch (CBM / EOS) and Tristan Young (VemmeKart) in the Senior ROK and Junior ROK divisions. Each are the lone pre-entries in their respective categories, with Macy Williams (CBM / EOS) not expected to contend Senior while three-time winner Frankie Mossman (J3 / CompKart) not in Sonoma. 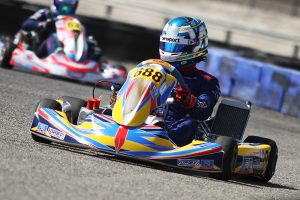 Letzsch is on the verge of making Challenge history with two championships in the same season. Letzsch (CBM / EOS) leads Senior 100cc standings by 74 points over two-time winner Blake Nash (Nash / EOS), who will not be in Sonoma. That puts Kyriakos Sioukas (AKR / EOS) as the top challenger in the standings, entering the finale 124 points out of first. Can Letzsch add to his Round Two victory en route to a title or will local drivers stand up and add to the winner’s list for 2021.

History could be made in the Masters ROK division with Derek Wang attempting to earn a third-straight championship. Wang (EOS) leads the standings by 39 points over Adam Kasick (FDM / CompKart) thanks to his three wins. A DNF in Round Three is his only blemish, thus forcing Wang to be on point all weekend to claim the series record of the first driver to earn three Challenge titles. Timothy Meyer (HRT / EOS) and Round Four winner Billy Cleavelin (RPG / Tony Kart) will be among those fighting for the top step of the podium all weekend. 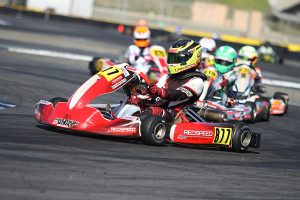 Four different drivers have won in the Junior 100cc over the four opening rounds. Lanie Benjamin (SF / Redspeed) won Round Two, and enters the final with the championship lead off three podium finishes. Round One winner Christian Cameron (AKR / Redspeed) is 24 points back, with two podium finishes of his own. He holds an advantage, racing at his home track this weekend. Cooper O’Clair (J3 / CompKart) has been steady over the four rounds, sitting third and still searching for his first podium finish. Round Four winner Lydia Small (SSM / Tony Kart) is fourth in the standings, sitting 100 points out. Stephen Eisert (SSM / Exprit), who was on the podium at the opening two rounds, could be among the locals to shine throughout the two rounds.

Two drivers will be fighting for the championship in the Masters 100cc championship. Mike Smith (VMI / EOS) has yet to visit the top step of the podium over the first four rounds in 2021, but leads the standings by four points over two-time winner Timothy Meyer (HRT / EOS). Smith has four total podium finishes with Meyer holding three. Dana Estes (RPM / Tony Kart) and Brian Phillipsen (MMK / Redspeed) have been among the challengers all season, returning for the finale with Ian Koentges (FDM / CompKart) a possible podium contender since moving to Masters at CalSpeed. 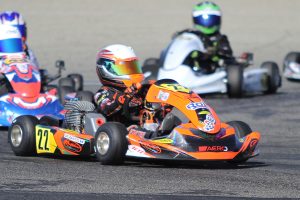 The Micro ROK division is welcoming the largest field of the season with eight drivers. Jaxon Porter (Nitro Kart) is the point leader after four rounds, scoring a win at the opener. Two-time winner Ashton Woon (Nitro Kart) will not be in Sonoma, putting Round Three winner Rhys Bowman (FDM / CompKart) becomes the lead title challenger, 27 points out of first. Troy Ferguson (Benik) and Sonoma regular Mateo Calderon (Aluminos) could be among those fighting for the top step of the podium over the two rounds.

Make sure to catch all the action on EKN Live all weekend and follow EKN on all the social media platforms for updates, images and videos.