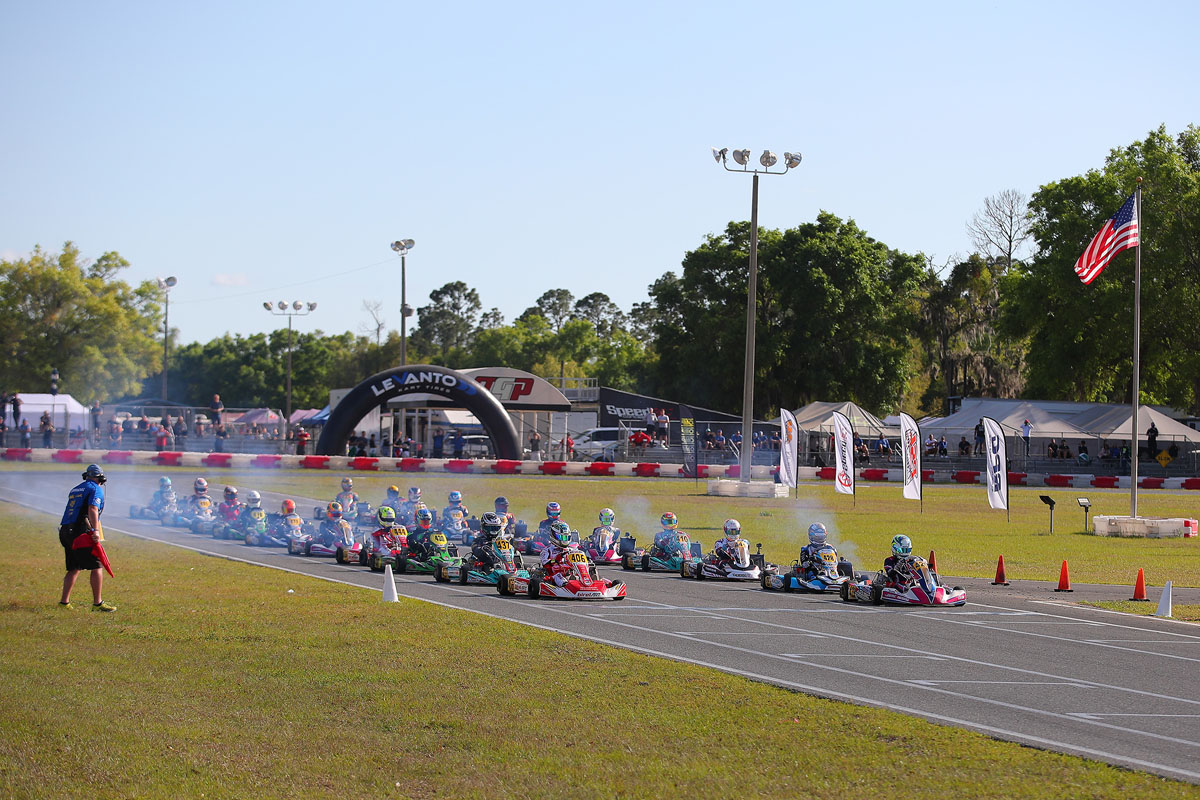 With the final round of the ROK Cup USA Florida Winter Tour now upon us, qualifying and the first wheel-to-wheel action of the weekend took place today as drivers make their bid to close the series on a high. With ROK Cup Superfinal tickets, ROK Vegas tickets and the prestigious Florida Winter Tour championships on the line, ROKKERs took to the ten-turn Ocala Gran prix facility for the first official day of competition.

Heat #1
Andres Ardiles (Zanella Racing) led the VLR Senior field to green for the first 12-lap heat race and jumped to the point entering the first corner but lost the top position shortly thereafter. Taking the lead again during the final corner of the opening lap, Ardiles opened a gap and never looked back. The family duo of Hallie and Cole Schroeder (Syntech Racing) ran second and third with Cole gaining five positions before the mid-way point. Grace Hemmerde (Rolison Performance Group) eventually moved into P3 with Rocco Pasquarella (JC Karting) falling to fourth. One lap later, Pasquarella failed to come by the stripe and retired as Charlie Murphy (Rolison Performance Group) moved to fourth, just ahead of Hallie Schroeder in fifth.

Following the heat, tech was completed, and penalties were assessed changing several of the top-five finishing positions. Ardiles would be the winner ahead of Cole Schroeder and Hallie Schroeder, Rubens Caceres (TB Kart) and Hemmerde.

Heat #1
Juan Basco (SLA Racing) converted his pole position to the lead on the opening lap as a four-driver breakaway would ensue. Laurentiu Mardan (Tecno Kart USA) and Cristian Vomir (Tecno Kart USA) were joined by Martin Stone (Goodwood Kartways). Basco and Mardan stretched their lead as Vomir and Stone had an intense battle, banging wheels on lap six allowing David Morris (Nadie) to close on the third and fourth place drivers. Stone moved to third on lap eight in the famous tree corner as Vomir was able to sneak back by in corner one on lap nine. Stone again returned the favor in turn five to gain P3 and hold on until the end. Basco earned a dominating win ahead of Mardan, Stone, Vomir and Brad Danieli (Mike Doty Racing).

Heat #1
Earning his first pole position of 2021, Jack Jeffers (PSL Karting) led the opening lap as Cooper O’Clair (J3 Competition) moved to second by the end of lap one. Chase Hand (Rolison Performance Group) was the biggest loser on the opening lap dropping three positions to fifth. In his FWT debut, O’Clair moved to the lead on lap two as Danny Dyszelski (Magik Kart USA) retired while on lap three, Hand’s trouble would continue falling to eighth. Jeffers went on a charge mid-race turning fast lap after fast lap to close the gap as he chased down O’Clair with Sebastian Wheldon running in third. Hand worked his way from eighth to fourth with two laps remaining and caught Wheldon on the final circuit but could not get by. Jeffers made a bid for the lead on the final lap but was unable to get by having to settle for second while Paul Bocuse crossed the line in fifth.

Heat #1
Diego Ardiles (Supertune) led from the opening lap to the checkered flag to score the heat one win ahead of Oliver Wheldon (JC Karting). Kai Johnson (PSA Check) gained four positions in the short heat race to run third until the final lap when Salvador Della Vecchia (San Antonio Racing) was able to complete a bump and run in the final corner to steal P3. Johnson ended his heat in fourth as Sarah Bradley (SBRacing) crossed the line in fifth, just ahead of championship point leader Enzo Vidmontiene.

Heat #1
Rene Martinelli (TB Kart USA) took the lead from his pole position starting spot as he was stalked for the first half of the race by Jordon Musser (PSL Karting) and Patrick Madsen (ANSA Motorsports). The front three would stretch a gap from the fourth-place driver, Daniel Dibos (Dibos Racing) as Peter Licciardi (TB Kart USA) held station in fifth. Musser tapped Martinelli on lap six to let him know he was there but was unable to make the move. Licciardi was able to make the move past Dibos as the two battled, with Dibos getting the short end of the stick and fell down the order to P12. Musser and Martinelli would go wheel-to-wheel on the second to last lap, nearly making contact but it was Martinelli who held on ahead of Musser. Madsen finished third ahead of Luis Sanchez (ANSA Karting) and Luis Mendez (AKT Racing) as Dibos also fell down the order due to the contact with Licciardi.

Heat #1
Once again starting on pole for the third time during the 2021 Florida Winter Tour, Connor Zilisch (Mike Doty Racing) was unable to hold his lead on the start. Diego Ramos (REM) took the lead in heat with Zilisch following in second for the opening lap. During the second circuit, Zilisch reclaimed his lead and the top-four filed back into their starting positions. After a strong start on the opening lap, Ramos fell back to fifth, giving Zilisch a strong lead by lap four. By the halfway point, the Senior ROK class began to settle into position. Closing the gap to the lead, Ryan Norberg (RPG) finished heat one in second and set the fastest lap of the race. Alex Stanfield (Crosslink) gained one position to finish in third followed by Diego Ramos and Thomas Annunziata (Mike Doty Racing) in fifth.

Heat #1
After claiming the pole in qualifying, Scott Roberts (Speed Concepts Racing) maintained his position and led the field through the start of the race. Renato Jader David (Orsolon Racing) made a pass on Mario Barrios (RPG) to take second in the opening laps as the top-five settled into position. Halfway through the race, Roberts maintained a nearly half-second lead over Renato Jader David and continued to extend his lead over the remaining laps. In the final laps, Jader David made a final charge and was able to gain on Roberts, but Roberts was able to hold the lead and claim the win, also setting the fastest lap of the race.

Heat #1
With a clean start to the race, Matheus Ramalho (REM) held his lead on the start, but by the end of the first lap, Augustus Toniolo (Rolison Performance Group) was able to make a pass and take over the lead while Alessandro Truchot (Parolin USA) and Max Cristea (Magik Kart USA) held their third and fourth positions. Five laps in to the nine-lap race, Ramalho was able to pass Toniolo for the lead and Tristan Murphy (Kartnick/RPM) took over fourth. Cristea began to fall back to sixth with Marco Romero (Zanella Racing) ultimately making a pass for fourth with two laps remaining. In the final lap, Ramalho and Toniolo crossed the line side-by-side with Ramalho holding the lead over Toniolo for the win. The top-five was rounded out by Truchot, Romero and Murphy.

Heat # 1
Parolin USA driver Paul Bocuse had a strong start to race one, passing Noah Baker (Supertune) and polesitter Ayden Ingratta (Speed Concepts Racing) for the lead. Three laps in, Cameron Weinberg (WB) had moved up four positions and took the lead for a brief stint before being passed by Ingratta as he took back the lead. Halfway in, Marcello Paniccia (REM) had gained three positions and broke into the top-four. After a hectic start in the opening laps of the race, drivers began to settle into their positions for the second half, led by Ingratta, Weinberg, Bocuse, Paniccia and Jeremy Fletcher (Team Felon). In the final lap, Ingratta, Weinberg, Bocuse, Paniccia and Jorge Ortiz (Supertune) led the field across the finish line as contact ensued behind them.

Heat # 1
With a strong start, polesitter Austin Garrison (Rolison Performance Group) held his lead and created a nearly half second gap over Jake French (PSL Karting) and AJ Myers (Checkered Motorsports). Over the first half of the race, the top-five drivers held their starting positions with Garrison leading over French, Myers, Danny Formal (ANSA) and Mathias Ramirez (Speed Concepts Racing). With the top-five unchanged through the entirety of the race, Austin Garrison held his lead while second place finisher, Jake French, set the fastest lap of the race.

At time of posting, all results are unofficial.

ROKKERS will return to the track Saturday for three more sessions of wheel-to-wheel action as heats two, three and the weekend’s prefinal go green setting the grids for Sunday’s main events.

Stay tuned to the ROK Cup USA social media pages for news, information, photos, results and daily reports from the final round of the Florida Winter Tour at Ocala Gran Prix.