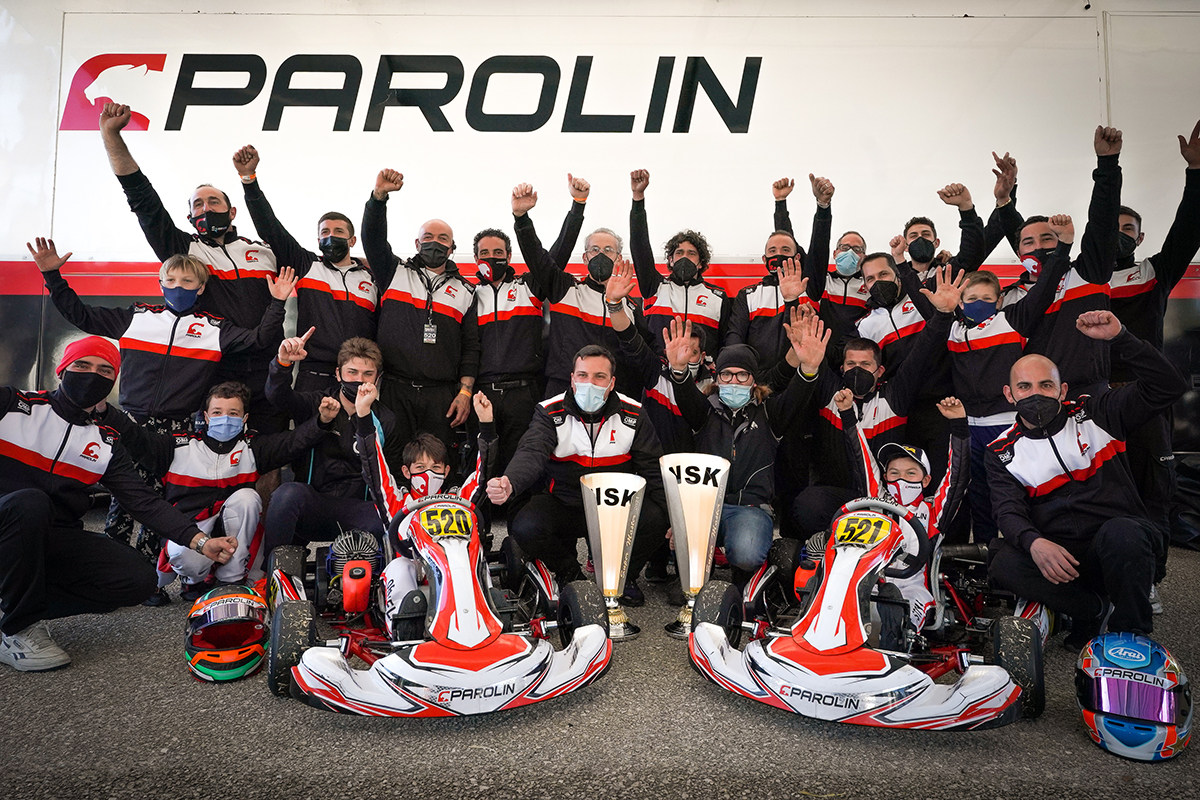 The second round of the WSK Super Master Series took place in the south of Italy at La Conca, a circuit renowned for its high grip. Costoya and Orjuela had a great duel in the Final stages which ended in a double win for Parolin Motorsport. In contrast to OK, there was no shortage of performances in OK-Junior. Al Dhaheri played a leading role, but could not defend his chances until the end, while Deligny reached the Final top 10 before being penalised.

“The track of La Conca is very special with a surface that gives a lot of grip,” explained Marco Parolin. “These conditions are very different from usual and not all the drivers are able to give their maximum in this configuration. The double win for Christian Costoya and Matias Orjuela in Mini is even more valuable for us as it shows how well our chassis can perform on all terrains, and the presence of four Parolins in the Final top five confirms our competitiveness. This is the third consecutive success of one of our chassis in Mini, while Parolin was the second most represented brand this weekend, all categories included. Very effective in OK-Junior, Rashid Al Dhaheri unfortunately retired in the Prefinal while Kai Sorensen, also very fast, was involved in an incident. Enzo Deligny was well up to 9th place in the Final before receiving a penalty.”

Christian Costoya’s fighting spirit paid off, as he gained 18 places during the heats before setting the fastest time in the Prefinal and then finishing with a victory in the Final. Matias Orjuela confirmed his strong potential and consistency by finishing 6th in Qualifying and then taking the lead in the heats with three wins. In the Final stages he was twice beaten by Costoya, who was formidable in the final metres. Both drivers made a jump in the overall WSK Super Master ranking with Costoya taking the lead and Orjuela coming back to 5th position. The other two Mini drivers in the team also qualified for the Final, with Oliver Kinmark moving up 10 places to finish 19th and Simas Bacisuka moving up six places to 27th.

Deligny in the Junior top 10 on the line

Rashid Al Dhaheri didn’t take long to adapt to the grip of La Conca. 16th against the clock, he took three top fours in the heats and regained nine positions, in 7th on Saturday evening. He was 5th in his Prefinal before having to retire on the last lap.

Enzo Deligny was the only one who could compete in the Final. Consistently, he came back to 9th in his Prefinal and made up another eight places in the Final by crossing the finish line in 9th position. A penalty caused him to drop back. Although he started well, Kai Sorensen had to deal with several problems in the heats and was forced to retire on the first lap of his Prefinal. Guillaume Bouzar was 39th in Timed Practice and was unable to qualify for the Final.

The Parolin Motorsport drivers had a Qualifying session that was too far off to make an easy return to the top of the ranking. Valerio Rinicella however reached the top three in his last heat. He set good times in the top ten, before ending the meeting in 21st position. Jesse Alejandro Carrasquedo managed to make up 12 places in the heats and made up some ground by finishing 25th in the Final. James Wharton also made up some ground as he came close to the top ten in his Prefinal, but his Final race was finished after just three laps.

Parolin Motorsport is now preparing for the third round of the WSK Super Master Series which will take place in a fortnight near Naples, and will also be attended by the KZ2 karts.