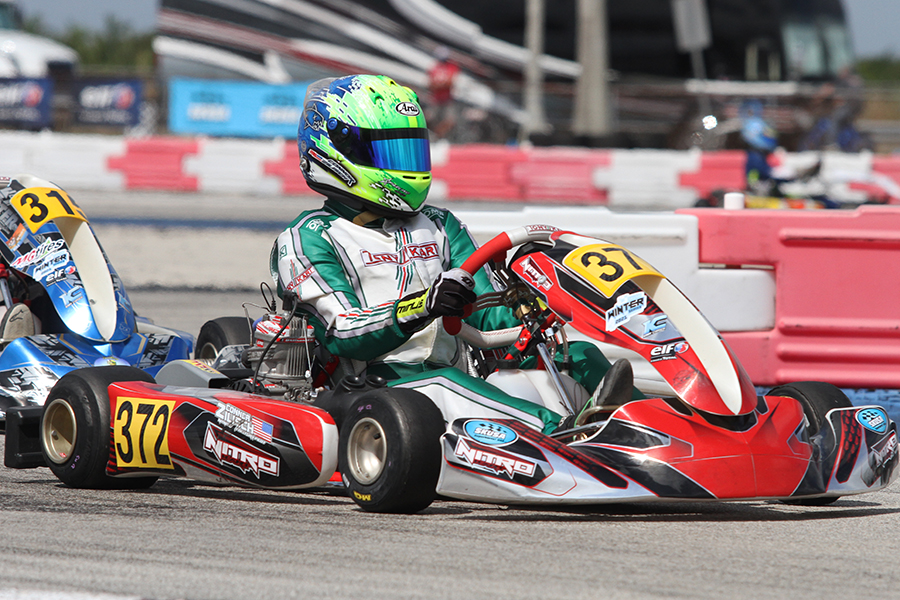 Europe and the rest of the world learned about the talented Connor Zilisch as the North Carolina driver became the first from the United States to win the FIA Karting Academy Trophy championship. Two wins in the opening two events in Italy and Belgium helped secure the championship prior to the series finale in Lonato, Italy. During the winter, Zilisch was recognized alongside the other FIA Karting champions at the FIA Prize Giving Ceremony, this year held virtually due to the COVID-19 pandemic.

That confidence his carrying over into the 2021 season as the 14-year-old begins his Senior rookie year. Zilisch began with victory at the WKA Daytona KartWeek in the X30 Senior class back in December. Connor dominated his Senior debut at the Florida Winter Tour in Senior ROK. February marked his Superkarts! USA debut, racing at the SKUSA Winter Series event on February 12-14 at the AMR Homestead-Miami Motorplex presented by MG Tires. The weekend was also his debut with the Team Nitro Kart team, who he will be racing with this season at SKUSA and the United States Pro Kart Series. 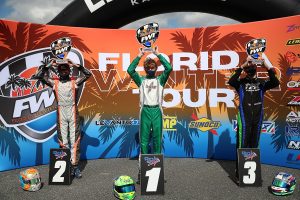 Zilisch was among those toward the top of the time sheets in official practice on Friday. Round Three on Saturday began with Zilisch in seventh after qualifying, about two tenths off two-time defending champion Ryan Norberg. Connor made great progress, moving up to the third position through the Prefinal. The lead group early in the Final fought tough, and Zilisch was shuffled back to eighth after seven laps. He struck back, climbing his way back up to fourth where he would cross the line, one spot short of the podium in his SKUSA Senior debut.

A similar start to Round Four on Sunday as Zilisch was seventh in qualifying to begin the series finale. Rather than placing third, Connor ended up second after leading his first laps of the weekend in the Prefinal. Starting on the front row, Zilisch was left on the outside as the field took the green flag. He ended up back in third after two laps, but fought forward right away to take over the lead from Norberg. After a few laps, Norberg took back the top spot from Zilisch. They ran 1-2 until lap 17 when Zilisch made his move, working past Norberg at the turn four hairpin. From there, Connor led the remainder of the 22-lap race to secure his first SKUSA Senior victory, and first with Team Nitro Kart.

The following weekend, Zilisch traveled to the Ocala Gran Prix facility for Round Two of the ROK Cup USA Florida Winter Tour. Connor continued on the momentum from January’s event in Miami, taking to the Ocala circuit in wet conditions to set fast time in qualifying. Zilisch would go on to win the opening heat race in the rain. The following day, conditions dried up and offered a different track for the Senior ROK field. Heat #2, Zilisch fell to seventh after starting on the pole position, working back up to fourth with fast lap of the race. A hard-fought Heat #3 saw Zilisch cross the line first but a four-position penalty for contact took the win away. The three results kept Connor on the pole position for the Prefinal. He led the final nine laps to win the race and followed that up the next day in the Final, showing the way in all 20 laps for a second straight victory in the series.

This past weekend, Zilisch made his Senior debut at the United States Pro Kart Series program, competing in both the X30 Pro and KA100 Senior class at the Southern Grand Prix held at Ocala Gran Prix in Florida. Connor grabbed his first win in KA100 Senior on Saturday, placing fourth Sunday after contact while leading on the final lap. He placed third in his X30 Pro debut in Round One before securing his first victory in the category in Round Two. Zilisch now leads both championships after the two rounds of racing, with the next event scheduled for April 30-May 2 at the New Castle Motorsports Park. This weekend, Connor will attempt to lock up the FWT Senior ROK championship, racing at the Ocala Gran Prix facility. 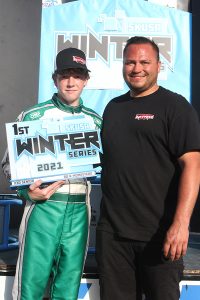 Chassis: Tony Kart
Engine/Engine Builder: Allison Racing Engines
Sponsors: Allison Racing Engines, OMP, Minus-273, Arai
Series You Compete In: ROK Cup USA, Superkarts! USA, WKA Manufacturers Cup Series, United States Pro Kart Series
Years Karting: 10
How did you get started in karting? My dad did track days in his car and a friend recommended karting
What has been the high point in your racing career? 2017 when I won ROK Cup Superfinal and SKUSA SuperNationals in the same month
What are your goals in racing? Become a professional racer in any pro series
In a few words, how would you describe your driving style? Aggressive but smart
Funniest moment at the race track? Getting rolled up in plastic wrap and thrown in the trash can!

What do you do when not at the track? School work, or playing with friends on the simulator takes up 95% of my time
What are your goals outside of karting? Become successful in the real world hopefully as a racecar driver
What app or game do you play right now? iRacing
What type of street car would you like to drive? Miata
What are your pet peeves or things that irritate you? People racing me in practice
What do you think could be done to improve the sport of karting? A more organized and fair series
What are your favorite aspects about the sport of karting? Family-like community