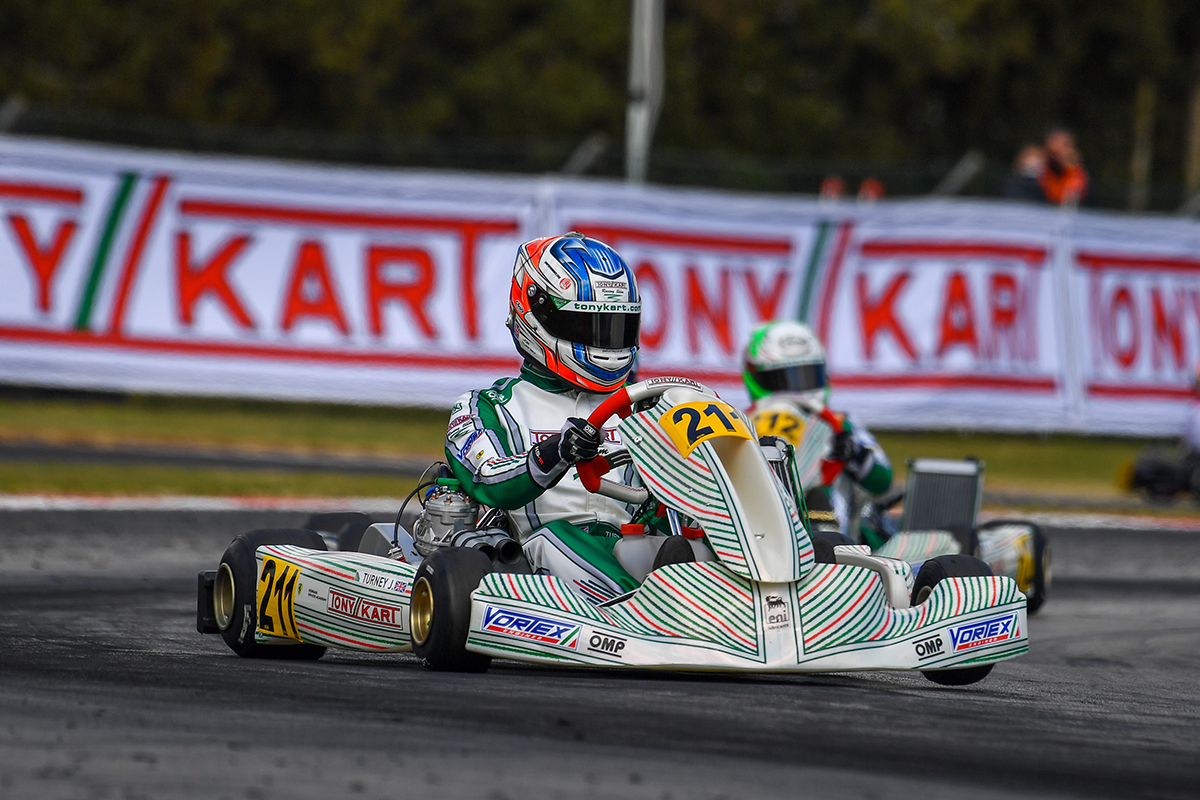 On the occasion of the second round of the WSK Super Master Series, our Racing Team obtains concrete results in the top positions, with three drivers among the first ten of the OK category.

In La Conca, our Tony Kart Racing Team is protagonist of the second round of the WSK Super Master Series on the International Circuit with the same name. The Tony Kart Racer 401R (for the OK and OKJ categories) and the Tony Kart Rookie 2020 (for the MINI category), equipped with Vortex home-engines, distinguish themselves for several positive performances, especially in the “major” class, the OK.

Starting from the latter, three of our official drivers are in the top 10 of the final category’s ranking. Starting from Joseph Turney, very close to the podium of the final: the British driver jumps with a good performance from 11th place, makes his way through his rivals and finishes 4th. A good result for him, already fast in the heats with a best lap signed in the fourth heat. Two positions further back than Turney we find Alfio Spina, finally rewarded by taking part in a final after having already proved to be competitive (but, unfortunately, unlucky) in the Adria events. The Italian, before reaching the final, gains a 5th place in the pre-final and also a 2nd place in the qualifying heats. Tuukka Taponen is constantly among the best drivers in the category throughout the weekend at La Conca: 3rd position in the overall ranking of the qualifying heats, 2nd at the end of the heats with a victory (and respective fastest lap), two second places and a third one. The triumph of his pre-final promises a final full of satisfactions, but the outside line at the starting grid does not reward the Finnish driver who finishes, despite the difficulties, 7th.
Not an easy weekend for our world champion in force Callum Bradshaw, however, featured by several comebacks despite a technical and difficult track. The Briton, who had climbed up to the top 10 in the pre-final, must stop the final prematurely.

Alexander Gubenko did not miss the call from our Racing Team in the OKJ class. The Russian driver, at his first race with our colours after a beginning of the season in the Kosmic Racing Department, does not make any mistake in the qualifying session, recording the fastest time in his group which gives him the 2nd place in the general ranking. With maturity and experience, Gubenko brings home three victories and a 3rd place in the four heats, introducing himself as one of the favourites for the victory. Some collisions penalized Gubenko in the pre-final, forcing him to start from the 13th place, but in the decisive final he obtains the 7th place with a recovery of 6 positions. James Egozi also distinguishes during the weekend: a win and a 2nd place are part of the spoils obtained in the qualifying heats, which mean a 3rd place in the ranking valid for the pre-finals. The American driver, after a 6th place in his own pre-final, enters the top 15. Highs and lows for Harley Keeble, hit once again by bad luck this weekend (after the first round at Adria) already in the qualifying heats. The British driver made a great comeback in the heats, even recording a fast lap and climbing not less than 38 positions. Despite of a penalty in the pre-final, Keeble gets access to the final, but starts from the last row: the British driver doesn’t get scared and recovers 19 positions, being the best climber of the day.

In the MINI category, once again, Jimmy Helias has the right pace to be among the leaders. The Frenchman, who distinguished himself in the qualifying heats with a victory, tries to make his way in the pre-final and obtains the 8th place, but he is not able to repeat the good performance it in the final, due to some too many collisions with his rivals.

The Tony Kart Racing Team will be back on track in two weeks, from 25th to 28th March, on the occasion of the third round of the WSK Super Master Series hosted at the International Naples Circuit, for all the four categories, including KZ2, which was not competing at La Conca.