Victories at Second Round of WSK Super Master Series to Lindbald, Powell and Costoya 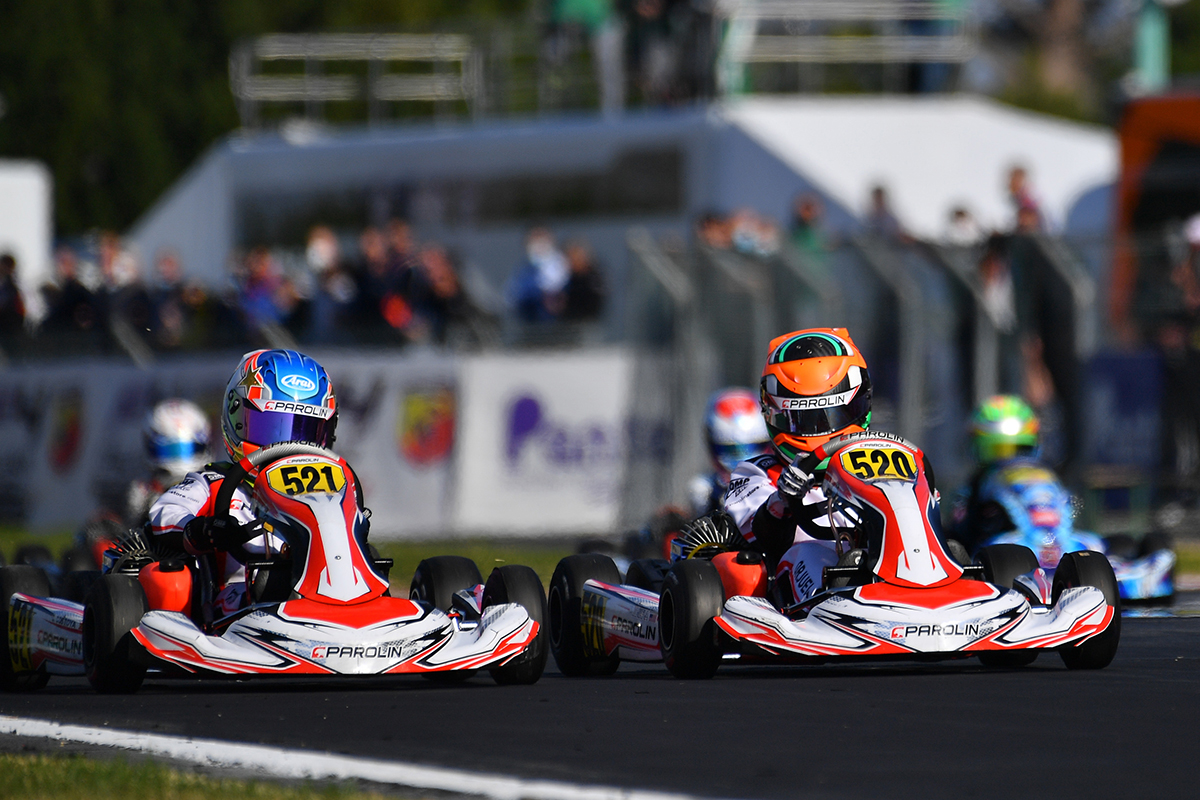 International karting by WSK Promotion offered again a good sporting page at the World Circuit La Conca in Muro Leccese during the second round of WSK Super Master Series. The 2021 program continued regularly fulfilling the professional and sporting needs of all the protagonists of this important sector.

In La Conca, a total of 171 drivers from 44 nations got on track in the three categories MINI, OKJ and OK. KZ2 will get back on track from the next round of WSK Super Master Series in Sarno on March 28th after the opening race in Adria and then the closing race on April 25th in Lonato will also see all the four categories on track.

In the second round of WSK Super Master Series surprises did not go missing, starting from OK where two protagonists like the Italian Brando Badoer (KR Motorsport/KR-Iame) and the American Ugo Ugochukwu (Sauber/KR-Iame) had to give up due to an incident in Prefinal-A, but also in OK-Junior where the provisional leader Rashid Al Dhaheri (Parolin Motorsport/Parolin-TM Racing) did not finish Prefinal-A due to an incident.

Lindblad wins OK, Camara retains the lead of the classification. 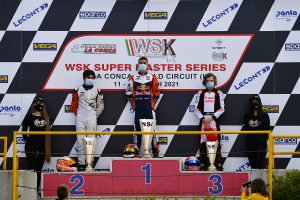 The OK final has had several drivers in the lead. The first position was initially taken by the Italian Andrea Kimi Antonelli (KR Motorsport/KR-Iame), who got off to a great start from the pole position and kept the lead for half of the race, when he was overtaken by his teammate and classification leader Rafael Camara (KR Motorsport/KR-Iame), before losing some further positions afterwards. In the closing laps, the KR Motorsport driver from Britain Arvid Lindblad took the lead of the race and kept it all the way to the flag. He proceeded the Brazilian Camara and the Pole Tymoteus Kucharczyk (BirelART Racing/RK-TM Racing), while the Brit Joseph Turney (Tony Kart Racing Team/Tony Kart-Vortex) recovered up to P4. Antonelli had to settle for P5 and Alfio Andrea Spina (Tony Kart Racing Team/Tony Kart-Vortex) was sixth. Camara kept the lead of the classification at 164 points, Lindblad is second at 136.

In OKJ Powell takes the win and the classification lead with it. 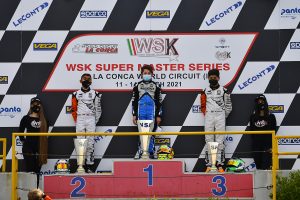 In OK-Junior the Jamaican Alex Powell (KR Motorsport/KR-Iame) had the upper hand at the end of a good final that he led from lights to flag, while the other great protagonist of the weekend, Singapore’s Akshay Bohra, had to recover some ground after losing a few places at the start.  At the flag, Bohra secured P2 behind Powell and was followed by the third driver of KR Motorsport, the Brazilian Matheus Ferreira. The Russian Tigran Bunatyan (Team Komarov/Tony Kart-TM Racing) was also among the fastest and claimed P4 from the Brazilian  Miguel Costa (Sauber/KR-Iame). The Belgian Douwe Dedecker (KR Motorsport/KR-Iame) was sixth at the end of a good recovery run and led the Russian Alexander Gubenko (Tony Kart Racing Team/Tony Kart-Vortex) and the Belgian Ean Eyckmans (Kosmic/Kosmic-Vortex). Powell installed himself on top of the championship at 108 points, relegating Al Dhaheri to P2 at 94.

Victory and classification lead to Costoya in MINI. 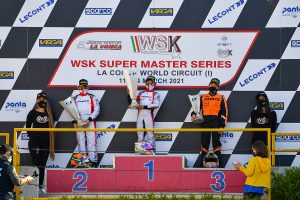 Several position exchanges happened also in MINI, that was uncertain until the closing lap when the Spanish driver Christian Costoya (Parolin Motorsport/Parolin-TM Racing) had the best of his teammate from Colombia  Matias Orjuela, who was second at the flag by just 0.009s. The third step of the podium went to the Russian Gerasim Skulanov (CRG Racing Team/CRG-TM Racing), who recovered several places and ended ahead of the other Russian Vladimir Ivannikov (Drago Corse/Parolin-TM Racing) and the Dutch René Lammers (Baby Race/Parolin-Iame). The latter was fifth and therefore was overtaken in the classification by Costoya that reached 127 points against the 119 scored so far by Lammers. The Asian Tiziano Monza (Sauber/KR-Iame) secured a good sixth place and led the Italian Emanuele Olivieri (Formula K Serafini/IPK-TM Racing). The top ten was rounded off by the Pole Jan Przyrowsky (AV Racing/Parolin-TM Racing), the Thai Enzo Tarnvanichkul (Team Driver/KR-Iame) and the Austrian Niklas Schaufler (Emme Racing/EKS-TM Racing).

The next events of WSK Super Master Series:

As the report above described, Jamaican Alex Powell secured his victory in the OKJ division at WSK. Two other drivers joined him in the main event. James Egozi (Tony Kart Racing Team) looked to be a challenger for the podium working himself up to third in points after qualifying 14th. He would be pushed back to 6th in Prefinal A, staring 12th for the main event. Egozi fell back to 18th at one time but fought back to finish 13th. Challenge of the Americas champion Enzo Deligny (FRA) was just outside the top-20 for much of the weekend, qualifying 24th and moving up to 22nd in points aboard his Parolin Motorsport entry. After gaining two post in Prefinal B, Deligny started the Final from row 9. Deligny drove up to the ninth position, however, official handed him a 10-second penalty, dropping him to 24th in the final classification. Kai Sorensen (Parolin Motorsport) was hovering around the top-20 with P18 in qualifying and 27th in points. An opening lap incident in Prefinal A took him out of the race, ending his weekend early. Caleb Gafrarar (Leclerc by Lennox Racing) made his second WSK start in the OKJ division. Gafrarar was 47th after qualifying and back to 56th overall after the heat races. He ended the weekend 23rd in Prefinal B, unable to transfer to the Final.

SKUSA Winter Series 2021 champion Matias Orjuela (COL) came inches away from victory in the Mini category, recording the best result of the 2021 European campaign for the Parolin Motorsport driver. Canadian Jensen Burnett (Energy Corse) was the other North American driver in the field. Burnett was 37th after the heat races, losing positions from his 11th in qualifying. Jensen was pushed to the tail of the field at the start of the Prefinal A race, fighting his way forward to 19th after 10 laps. A pushback bumper penalty dropped him to 25th to end his weekend early.

A surprise early ending came for the 2020 FIA European Champion Ugo Ugochukwu in OK. Ugo qualified fifth overall and had three solid heat races before trouble in the fourth. That dropped him to 21st in the points and in the middle of the field for the Prefinal A. He worked his way toward the front of the field until lap 13 when a driver contacted the barrier in the famous chicane section of the track. He sat in the middle of the track and Ugo had no where to go, ending his race and weekend early.