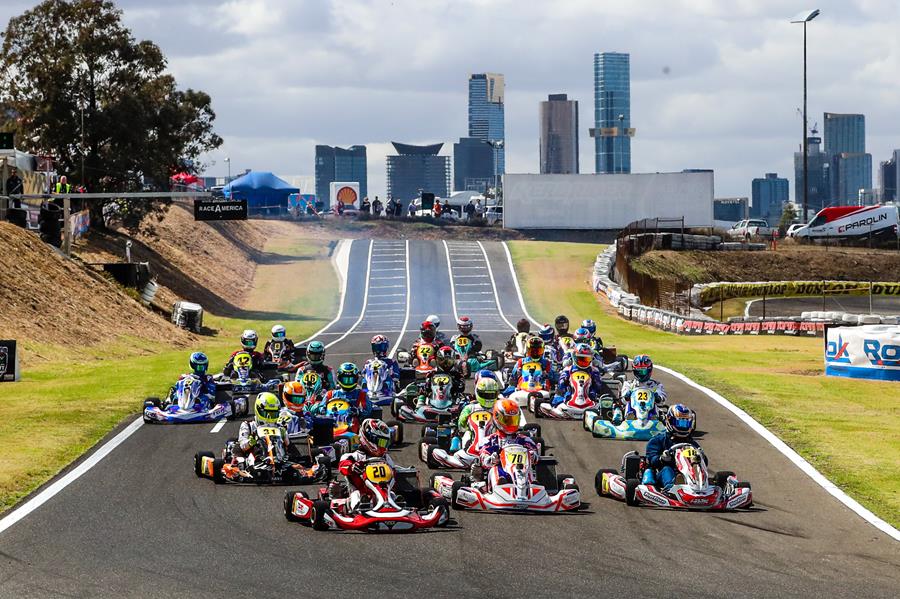 Drivers representing four states of Australia claimed honours on Sunday at the second round of the SP Tools Australian Kart Championship, presented by Castrol EDGE in Port Melbourne.

With 288 drivers across the eight classes, a thrilling weekend of racing drew to a conclusion, intensifying the title chases as the Championship heads to Adelaide’s Bolivar Raceway on the first weekend in May.

KA2 Championship leader, Jordan Shalala annexed his lead in the elite Junior category after round one with an emphatic victory in this afternoon’s final. The Sydney-sider took a 1.9 second win over fellow NSW racer, Costa Toparis to complete an EVOKart quinella. Victorian, Kristian Janev made his return to the Championship with a hard fought third placing in his Formula K.

Australia’s premier Gearbox class, KZ2 was taken out by Ricciardo Kart’s Troy Loeskow. The reigning Australian Champion has started his season with two round wins, however this weekend’s performance was not as resound as it may look on paper.

Loeskow had difficulty in the heat races and it was a tight run final, having started the 25-lap race from down the order.

The early stages were dominated by the Tom Williamson Motorsport WPK (Will Power Kart) of Cody Gillis who had a charging Joshua Denton throwing a monumental challenge to the leader after an epic start. The South Australian’s charge cruelly ended just past the halfway point while on Gillis’ tail and the engine mount came adrift on his FA Kart, putting him out the race.

At this point, Gillis looked home and hosed, however Loeskow powered forward to chase down Gillis and take victory – the first for his Patrizicorse team at the Melbourne venue in the class. Behind the duo, the final podium position wasn’t decided until the final moments, ultimately going the way of Ricciardo Kart’s Henry Johnstone – who edged fellow Victorian Mitchell Mackay late in the race. Young New South Welshman, Adrian Haak sliced through the field to finish fifth – with Brad Jones Racing Repco Supercars pilot, Macauley Jones finishing sixth.

Five time Australian Champion James Sera made a successful return to AKC competition in KA3 Senior. In yet another KA3 classic, Sera waited until the last moment to take victory – which was significant as it was the first Australian Title round win for the EOS Kart. Sera’s tenth-of-a-second win came after a race long fight that included several attempts from other competitors at the race lead and the minors, the battlepacks including the likes of Matthew Waters, Gerry Westerveld, ultimate second place-getter, Benito Montalbano and Jace Matthews – who led the Title chase coming into the weekend and completed the podium.

The youngster got the hole shot at turn one by rounding up title combatants, Cody Brewczynski and Brendan Nelson around the outside at turn one.

Nelson’s protection of his Title lead was short-lived, a brake failure halfway through the opening lap saw him spear off the circuit and out of contention at a rapid rate of knots.

NSW driver, Brewczynski immediately was in the middle of the battle with Goodall and veteran Victorian, Matthew Wall, the trio swapping the top three positions throughout the course of the race.

Ultimately though, Goodall was able to push through and get a solid victory for the DR Kart (Danilo Rossi) team over Brewczynski and Wall – which sets up for a tantalising third round in South Australia.

Defending Australian Champion, Bradley Jenner made an incredible return to X30 on Sunday afternoon. The Victorian, who missed round one due to Covid restrictions, put in a command performance to take victory by 1.4 seconds.

The fight was on from the get-go with Jenner starting alongside 18-time Australian Champion, David Sera. Sera was involved in skirmishes first with Jacob Dowson and later with Jackson Souslin-Harlow (the latter coming off second best) before he had a tyre deflate just past the halfway point.

The big story though was Championship leader, Jace Matthews’ charge coming to a halt with just three laps remaining. He was left to wonder what could have been after being in a strong position, seeing Title contender, Harrison Hoey come through for fourth position not helping his plight.

Series leader, Alex Ninovic continued his strong Championship run with a second consecutive win in KA4 Junior. Ninovic took his Scuderia PCR entry to victory by seven tenths of a second after a race long battle at the front.

Benjamin Munro (Ninovic’s closest Championship rival heading to Melbourne) was among the action right through the weekend and although he threw everything at the New South Welshman, came home runner-up, while Ben Macmillan, who is also in the Title chase, completed the podium.

In Cadet 12, Lewis Francis asserted a dominant weekend by taking victory. The Victorian crossed the line four-tenths clear of Lewis Cordato and Bradley Majman scored his first AKC podium after a tight battle for that position with Cordato and early race leader, James Anagnostiadis.

Queenslander Sebastian Eskandari-Marandi took his third consecutive AKC round win in Cadet 9. It was a dominant performance from the Parolin driver collecting the victory by 1.6 seconds over Zack Hilder, who had been at the front all weekend, and Alaster Flack – who completed an all Queensland podium.

After a short hiatus, the SP Tools Australian Kart Championship, presented by Castrol EDGE will return to Adelaide’s Bolivar Raceway for the first time in several years over the weekend of April 30-May 2.

Video of today’s action is available on demand here.

Full results from the weekend’s action is available here.