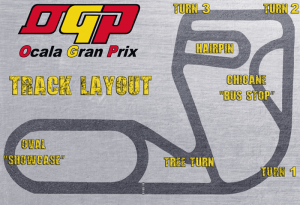 The ninth season for the United States Pro Kart Series presented by MG Tires is set to begin this weekend as the program returns to Ocala Gran Prix. The Ocala, Florida facility was scheduled to be the 2020 opener before the COVID-19 pandemic put a pause on the season beginning. Once the season began in July, the series set two new records for total entries, one at New Castle Motorsports Park of 218 entries until the series finale at GoPro Motorplex welcomed 223. The 2021 opener this weekend has elevated that record to a new level, with 287 pre-entries for the weekend.

Ocala Gran Prix has welcomed several national and international events, including the season opener for the United States Pro Kart Series in 2018 and 2019. The 6/10-mile, 8-turn course is like the Bristol Motor Speedway of karting with the tight confines of the circuit with not much room to give.

Because of the size of the course and the fields, three of the categories will be narrowed down to 36 drivers for the main event with a new format to the USPKS. KA100 Senior, KA100 Junior and Mini Swift will break up the field after qualifying each day into a Prefinal ODD and Prefinal EVEN, based on qualifying position. The top-16 from each Prefinal moves to Final, while the rest compete in a Last Chance Qualifier (LCQ) to earn one of four transfer positions. 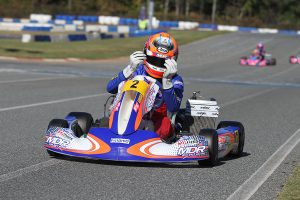 eKartingNews.com is proud to be providing the ninth season of Trackside Live program with United States Pro Kart Series. Tim Koyen will be calling the action all weekend from Ocala. Those unable to attend can listen in to the live broadcast – presented this weekend by A-Maxx Racing, Franklin Motorsports and Acceleration Kart Racing. Bookmark www.ekartingnews.com/live and follow the EKN social media channels for more throughout the weekend in Florida. 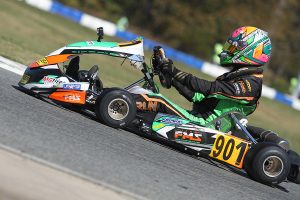 While X30 Pro is nearly at the 40-driver mark, KA100 Senior is leading the way in numbers with 60 entered for the series opener. The category made its debut in North America with USPKS back in 2017, and since, the championship has been won by four different drivers. Two of them will be in the field with Brandon Lemke set to defend his crown from 2020 with 2017 title winner Alex Bertagnoli rejoining him under the Franklin Motorsport / Merlin tent once again. Lemke and Bertagnoli were two of the six different winners from last year, including Arias Deukmedjian (Zanella / Kart Republic) who return for the 2020 opener as top contenders. Among the large field is the entry for two top shifterkart drivers, trading in six gears for single speed. EKN Driver Rankings #1 AJ Myers (Magik Kart) and former #1 Jake French (PSL / Birel ART) will be among those competing along with veteran 100cc drivers Austin Osborne (IRM / OTK), Matthew Mockabee (MDR / OTK) and Chase Jones (MPG / Will Power Kart). Rookies are a story in this category as well with Zilisch, Stanfield, Park, Westin Workman (TimmyTech / CompKart), and Thomas Annunziata (MDR / Tony Kart) all doing double duty in their USPKS Senior debuts.

The Junior divisions is open thanks to the graduation of both champions in USPKS – Alex Stanfield (X30 Junior) and Brent Crews (KA100 Junior). All five winners from 2020 in X30 Junior have moved up, making this weekend a possible breakout for one of the 39 drivers looking toward championship run at the end of the season. Paul Bocuse made headlines with his signing with Parolin USA just days ago, making his team debut this weekend. Noah Baker (Supertune / Tony Kart), Jack Jeffers (PSL / Birel ART) and Jeremy Fletcher (OTK) come in as the veterans of the class. Christian Miles is moving over from KA100 to X30 while also making the move to Mike Doty Racing / Tony Kart. One driver making his USPKS debut is California driver Frankie Mossman (J3 / CompKart) coming off three wins at Challenge of the Americas to begin the 2021 season. Rookie drivers to watch include Cameron Brinkman (Franklin / Merlin), Parker DeLong (RPM / Tony Kart) and Sebastian Wheldon (JC / Kosmic).

The KA100 Junior class will be exciting, climbing to 48 drivers on the weekend. Similar to X30, none of the 2020 winners or top-five in the championship are returning. Baker, Austin Jurs (Franklin / OTK) and Danny Dyszelski (Magik Kart) are among those running double duty and entering the weekend as favorites. Among the rookies, Brinkman, DeLong and Wheldon will be matching the double. KA-only rookies include Spencer Conrad (Nitro / Tony Kart), Cooper Shipman (IRM) and G3 Argyros (SCR / Redspeed) from California. While not a Junior rookie, Chase Hand (RPG / Kosmic) is making his USPKS debut after leaving Florida last month as the SKUSA Winter Series champion. 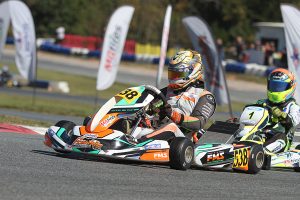 Scott Kopp returns as the defending champion in the record-field for X30 Masters (Photo: EKN)

X30 Masters has record numbers on the weekend, growing to 25 drivers for the opening weekend. Among them are the last three champions – Scott Kopp (2020), David Galownia (2019, and Laurentiu Mardan (2018). Kopp (Franklin / Exprit) won four of the six rounds last year to earn his first title, and carry the #1 USPKS plate this season. Galownia (TimmyTech / CompKart) finished third in his title defense last year while Mardan (TecnoKart USA) is looking to rebound after a tough 2020. Scott Roberts (SCR / Redspeed) was one of two drivers to beat Kopp on the year, coming back again as one of the top contenders for the championship run. All five from last year’s top-five in the championship are back, including Alex Mueller (ACM / Tony Kart) and former series champ Cristian Vomir (TecnoKart USA).

The Mini Swift category has 42 drivers and will be among the three to use the two Prefinal and LCQ format. Last year’s champion Max Garcia has moved up to the Junior ranks, opening the door for a young driver to stand out with no returning winners from 2020. Among the notables in contention before hitting the track are Nitro Kart drivers Ben Maier and 2019 Micro champion Aryton Grim along with veteran Cadet driver Oscar Iliffe (IRM / Tony Kart). Oliver Wheldon (JC / Kosmic) made the jump to Mini last year, coming in as one of the favorites. The class will feature the last three USPKS Micro champions. Joining Maier and Grim is 2020 title winner Jack Iliffe (IRM / Tony Kart). Iliffe leads a solid rookie class that includes Cade Jaeger (Nitro Kart), Carson Weinberg (Nitro Kart), and Asher Ochstein (Benik) who all finished inside top-five of the 2020 championship. Making the trek over from the west coast are Race Factory drivers John Antonino and Gage Korn. Antonino has three wins at Challenge of the Americas this winter already. 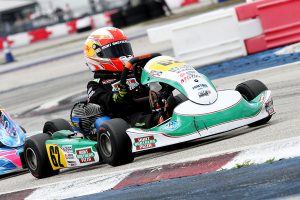 Keelan Harvick is among those looking to standout in the Micro Swift class (Photo: EKN)

A record 35 pre-entries for Micro Swift is the major highlight of the event, giving USPKS and karting a bright future. All five of last year’s top-five in the championship have moved up, as new names will be among those competing for the top step of the podium on the weekend. Drivers that have stood out at the end of 2020 and the beginning of this year include Isaac Malcuit (AKT / Kart Republic) and Keelan Harvick (Nitro Kart). Malcuit dominated in Dayton and Harvick is the SKUSA Winter Series champ. Others to stand out in Florida over the winter include Augustus Toniolo (RPG / Kosmic), Gianmatteo Rousseau (Nitro Kart) and Alessandro Truchot (Parolin USA).

Be sure to follow the social media channels for eKartingNews throughout the weekend and be sure to catch EKN Live playing all weekend long.