Meier, Donald and Lloyd among the eight different winners in Charlotte 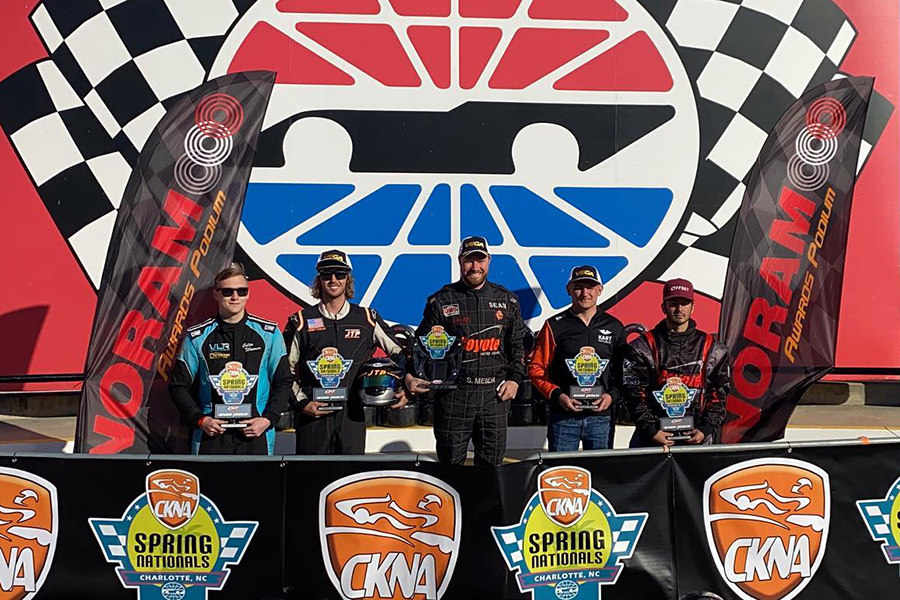 The Cup Karts North America program hosted its second edition of the Spring Nationals this past weekend, running this year on the newly repaved kart track located inside the Charlotte Motor Speedway. The Midwest-based organization is expanding in 2021, launching the new CKNA South Division program in Florida, while also moving their Spring Nationals event east to the historic Concord, North Carolina facility. The updated one-off event for the organization welcomed a whopping 283 entries over the eight Briggs & Stratton categories. 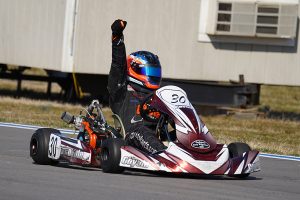 Sean Meier came out of the final lap in Senior Medium with the victory (Photo: Alissa Grim Photography)

The largest division was the Senior Medium class with 55 drivers battling over the two days of competition. Zach Linsell (MGM) set the tone with the quickest lap in qualifying, posting a time of 47.036 seconds. Former Grand Nationals winner Colin Warren (VLR) was only 92 thousandths off Linsell’s time. The category was broken up into groups for heat races. Corey Towles (Eagle) was able to secure two of the heat race wins after qualifying fourth overall. Pauly Massimino (Coyote) and Jacob Donald (Kart Republic) were the other two heat race winners. Towles led the field to the green flag in the main event and held the point for the opening three circuits. Donald took over the position on lap four, showing the way until two laps remaining, as Mick Gabriel was running second with Massimino in third. A wild two laps ended with Sean Meier (Coyote) going from fifth to first on the final circuit. Gabriel retired on the final lap following contact. Donald ended up crossing the line in second with Towles third, Massimino fourth and Warren in fifth. 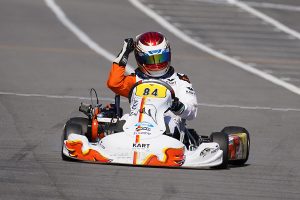 Senior Light featured 46 drivers, led after qualifying by Jacob Donald (Kart Republic) with a 46.873 lap time. Colin Warren (VLR) was a close second, off by 16 thousandths. Like Senior Medium, the class was broken up in groups, featuring four different heat winners. Both Donald and Warren earned a win, as did Ian Quinn (Charles Leclerc) and Pauly Massimino (Coyote). Donald led the field to the green flag and paced the opening two laps until Warren took control for five circuits. On lap eight, Donald returned to the point and was able to hold on for the remaining 10 laps for the victory. It came down to a photo finish, with Dylan Amundsen (MGM) coming up 11 thousandths short at the line. Massimino came across in third ahead of Corey Towles (Eagle) and Warren. 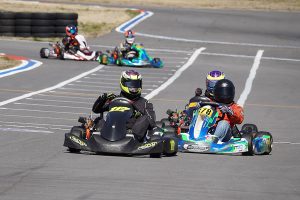 Donald competed in all three Senior categories, and was among the contenders in the 31-driver Senior Heavy field. The CKNA Grand Nationals 4 Senior Medium champion laid down a 47.739-second lap in qualifying to edge out Jacob Duvall (Eagle) and Eric Fagan (MGM) by under 32 thousandths. Donald bested Fagan in the opening heat race with the positions changing for Heat #2. The battle continued into the main event, this time with Duvall into the mix early on. Donald led the opening four laps until both Fagan and Duvall worked past. Donald reclaimed the top spot on lap seven and stayed there until he was challenged again on lap 12. Contact fighting for position in turn eight at the end of the back straight sent Donald off track and into the tire barriers, ending his run at the victory. The lead pack was bunched together after that, with Duvall at the front. Duvall led for five laps until the fight for the victory began in the final two circuits. Fagan led at the white flag, but when they came back around for the checkered flag, Aren Lloyd (Eagle) of Waycross, Georgia crossed the line first to earn the victory. Fagan ended up in second with Duvall in third. Ryan Bennett (MGM) and Sean Meier (Coyote) completed the top-five, all on American-made chassis. 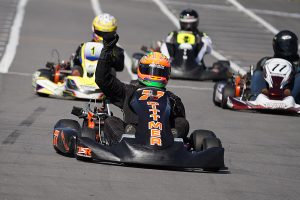 The Masters class, featuring drivers 35-years-of-age and older, had 37 drivers battling for the top spot. Qualifying was super tight, with the top seven drivers separated by just 86 thousandths. North Carolina driver Tim Shutt (CompKart) posted a 48.297-second lap to end up P1 and on the pole position for the opening heat race. In that initial heat, Chris Cline (Ionic) drove from fifth to first with Michael Dittmer (Eagle) following him through for second. The two ran 1-2 for the first nine laps of Heat #2 until contact on the final circuit dropped Cline to 11th and Dittmer to fourth. That allowed Shutt to earn the race win. Shutt led the first four laps of the 18-lap Final until Dittmer drove his way to the front. From there, Dittmer put down consistent laps, including his quickest on lap 17 to claim the victory. Shutt had fast lap of the race, but settled for second. Cline drove himself up to the third step of the podium with Chris Cirillo (Coyote) fourth and Todd Baron (Deadly) fifth. 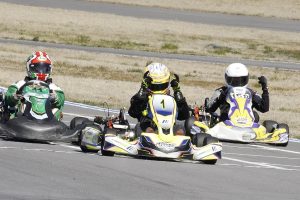 The new Legends category made its national debut, focused on providing drivers 50 years-of-age and older a class of their own. A total of 14 drivers took part in Charlotte with Tim Shutt (CompKart) earning the inaugural victory. Timothy Clark set fast time in qualifying (48.243), but Shutt came from fifth in the opening heat race to win. Shutt beat out Clark again in Heat #2 for the win. In the Final, Shutt led the opening 11 laps before Todd Baron (Deadly) took over the point. Baron led the next five laps until Shutt regain the top spot, leading the final two circuits for the victory. Baron finished second, as both drivers ending up on the podium in Masters and Legends. Jody Covington (MGM) was third with Duke Zink (MGM) in fourth and Clark completing the top-five. 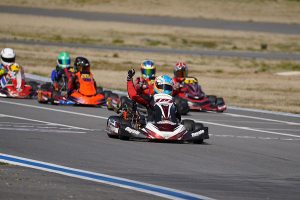 Owne Lloyd came away on the last lap to win in Junior (Photo: Alissa Grim Photography)

The Junior division featured 40 drivers on the weekend. James Overbeck (Tony Kart) was the driver to beat early on, setting fast time in qualifying (47.648) and winning the opening heat race. Overbeck went back to third in Heat #2 as Carter Pryor (Ionic) went from fourth to first in the 10-lap race. Overbeck returned to the point at the start of the Final, leading the first 17 laps of the 18-lap event. On the final circuit, racing for the lead, Overbeck got the worst of it while Owen Lloyd (Coyote) emerged as the leader, crossing the line first for the victory. Parker DeLong (Nitro Kart) moved up to second on the final circuit with Christopher McKeithan (Nitro Kart) following in third. Spencer Conrad (Nitro Kart) moved to fourth as Overbeck fell to fifth. 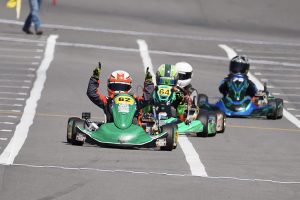 Sportsman was the second largest division of the event with 51 drivers taking part. Caleb Tarter (Nitro Kart) started out as the top driver in the qualifying session, posting a 47.518-second lap. The heat races saw two drivers showing the way with Keelan Harvick (Nitro Kart) and Isaac Malcuit (Kart Republic) each earning two wins. A solid lead pack joined the duo in the main event after Malcuit led the opening five laps before Harvick moved through to take over the point. The race came down to the last lap with Harvick finding himself in third as they went to the turn 14 hairpin. Harvick went from third to first on the exit, crossing the line for the victory. Malcuit came 53 thousandths short at the stripe. Cade Jaeger (Nitro Kart) drove to third ahead of Nash Gierke (Kart Republic) and Jase Petty (Kart Republic). 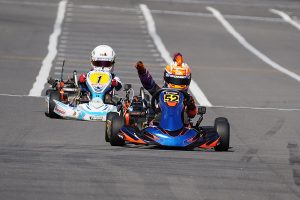 It was a sweep on the weekend for Cooper Mull (Nitro Kart) in the Kid Kart class. Mull was P1 in all four sessions for the category, winning the main event by four tenths over Camdon Clay (Top Kart). Jaxon Stone was third with Zion Dyer and Elam Stoner (EVO) rounded out the top-five.

The Cup Karts North America program has a big season line-up for 2021 with the CKNA South Division resuming its schedule with Round Two set to be held on May 8 at the 103rd Street Sports Complex in Jacksonville, Florida. The CKNA North Division will open its 2021 season on April 30 – May 2 at the Concept Haulers Motor Speedway in Sheridan, Illinois. Everything will wrap up in 2021 with the Cup Karts North America Grand Nationals 5, scheduled for October 1-3 at the New Castle Motorsports Park.