OTK Products Claim Nine Victories at Challenge of the Americas 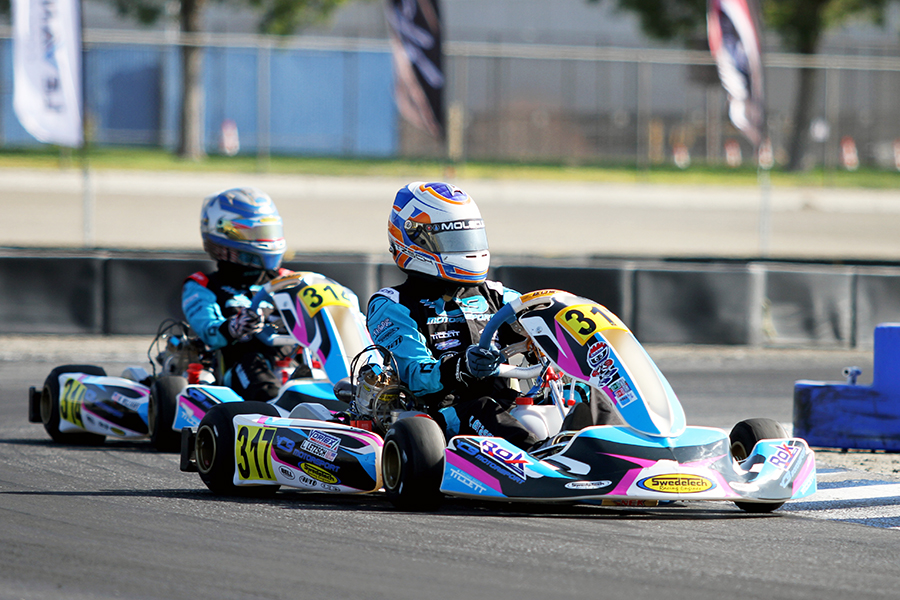 Winter karting on the west coast continued with the second event of the Challenge of the Americas visiting the CalSpeed Karting facility in California. Rounds Three and Four of the ROK Cup USA international championship program were contested on the popular Fontana circuit, which is situated just outside turn four of Auto Club Speedway. OTK products were front and center all weekend long as the brand’s drivers and teams were able to combine for 36 top-five finishes, including 27 podium results and nine victories over the two days of competition.

In four of the classes, OTK products swept the action, taking both victories in the respective divisions. It is now four-straight wins for Liam Letzsch in the Senior ROK category as he made away with another clean sweep on the weekend. Letzsch’s CB Motorsport / EOS teammate Macy Williams made it a 1-2 finish each day. 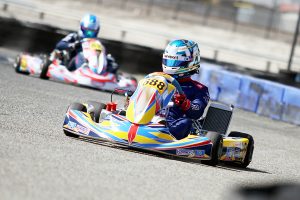 Billy Cleavelin (SpeedSense Motorsports / Tony Kart) and Derek Wang (EOS) each took home a win in Masters ROK. Cleavelin was joined on the podium by Mike Smith (VMI / EOS) while Tim Meyer (HRT / EOS) placed fourth. On Sunday, the podium was swept by OTK products as championship leader Wang secured the victory ahead of Meyer and Cleavelin. Smith completed the top-five.

OTK products took the top-four positions in the Senior 100cc class each day. Blake Nash (Nash Motorsport / EOS) secured his second victory of the season ahead of Jake Drew (Ryan Perry Motorsport / Tony Kart) and Karson Porter (Ruthless Karting / Exprit) with Liam Letzsch (CB Motorsport / EOS) in fourth. The following day was dominated by Drew in the Final, earning his first victory on the year. Letzsch improved to the second spot with Nash in third. Macy Williams (CB Motorsport / EOS) was one spot short of the podium in fourth. 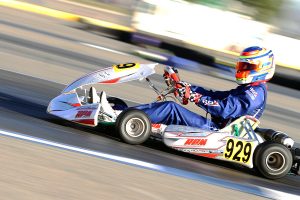 Jake Drew secured victory in the Senior 100cc on Sunday for Round Four (Photo: eKartingNews.com)

In total, OTK has secured all four victories in the Senior ROK, Masters ROK, Senior 100cc and Junior 100cc over the first four rounds for Challenge of the Americas.

Completing the win total of nine on the weekend was Brett Harrelson. The Nash Motorsport / EOS driver nearly pulled off the sweep on Saturday until an incident ended his race early. Harrelson bounced back the following day to complete the sweep, leading from qualifying through the Prefinal and every lap of the Final. Mike Smith (VMI / EOS) was runner-up both days. Tim Meyer (HRT / Tony Kart) placed third on Saturday and fourth on Sunday while Dana Estes (Ryan Perry Motorsport / Tony Kart) finished fifth in Round Three. 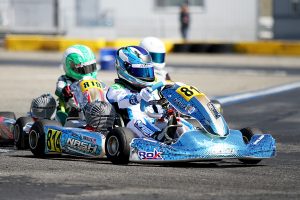 OTK products recorded three podium finishes in the Shifter Masters ROK division. Round Two victor Cliff Kujala (Pure Karting / Tony Kart) was able to secure the runner-up finish on Saturday and come back to third on Sunday. Ryan Yop (Redspeed) made his 2021 debut, placing third in Round Three.

The Challenge of the Americas is set to host the final two rounds of the 2021 season on March 26-28 at the Sonoma Raceway Karting Center in Sonoma, California. Several OTK drivers and teams will attempt to complete the championship chase with Rounds Five and Six.