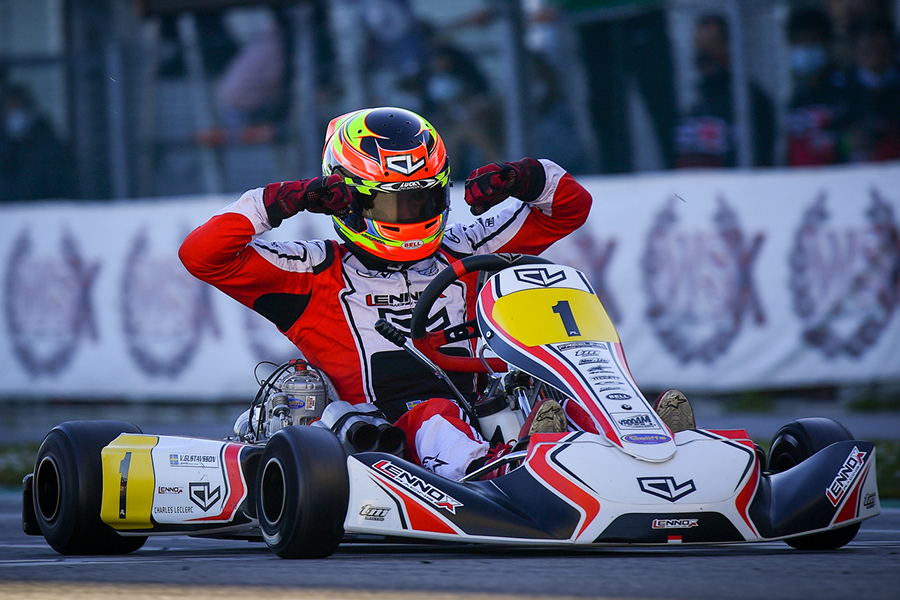 The intense weekend in Adria in occasion of the first meeting of the WSK Super Master Series ended again with a good presence, as happened one week ago at the WSK Champions Cup. More than 340 drivers reached in fact Adria from 50 different countries for this early race of the International karting season in the four categories KZ2, OK, OKJ and MINI.

The final stages run on Sunday, February 28th, have been particularly exciting at the end of 50 qualifying heats and Prefinal A and B of all the categories. The top step of the podium was occupied by the main protagonists of the WSK Champions Cup that was run one week ago, but they did not have an easy life to get this win.

Gustavsson on top in KZ2. 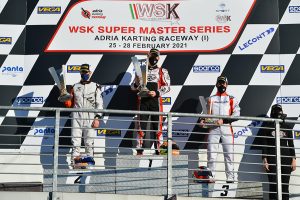 In KZ2, after an initial lead by the Finn Juho Valtanen (KR Motorsport/KR-TM Racing), the Swede Viktor Gustavsson (Leclerc by Lennox/BireART/TM Racing) took the lead and won the final. Gustavsson turned out to be the main protagonist of the opener of the WSK Super Master Series after winning the WSK Champions Cup last week. He posted the quickest time in qualifying, was second after the heats, won his Prefinal and secured a strong win in the Final. The second place went to Juho Valtanen, while the third to a great Francesco Celenta (Parolin Motorsport/Parolin-TM Racing) who completed a good recovery race. Among the big names that did not finish the race, the Finn Simo Puhakka (Tony Kart Racing Team/Tony Kart-Vortex) had an incident at the start after being the quickest in the heats. Danilo Albanese (KR Motorsport/KR-Iame) secured a good fourth place leading Senna Van Walstijn (CPB/Sodikart-TM Racing) and Riccardo Longhi (BirelART Racing/BirelART-TM Racing), while Alex Irlando ended seventh at the debut on CRG.

Camara wins OK making up for the lost ground. 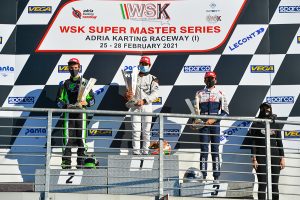 In OK an incident at the start of the Final voided the victory scored by Arvid Lindblad (KR Motorsport/KR-Iame) in the heats and in his Prefinal. The Italian Edoardo Ludovico Villa (TB Kart/ TB Kart-TM Racing) initially took advantage of the misfortune of the British driver, but eventually the Brazilian Rafael Camara (KR Motorsport/KR-Iame) recovered the positions he lost at the start. Camara bounced back on top and took the win building a good margin on Villa. The American Ugo Ugochukwu (Sauber/KR-Iame) secured a good P3. The fourth place went to the Bulgarian Nikola Tsolov (DPK/KR-Iame), who led the Pole Tymoteusz Kucharczyk (BirelART/RK-TM Racing) – that also recovered some ground – and the Israeli Elkin Ariel (VDK/KA-Iame). Brando Badoer (KR Motorsport/KR-Iame) slipped down to P7 instead after holding P3 early on. 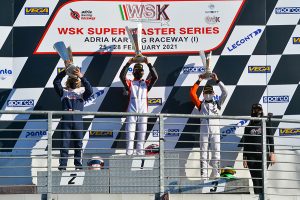 In OK-Junior United Arab Emirates’ Rashid Al Dhaheri (Parolin Motorsport/Parolin-TM Racing) claimed the win thanks to a great start after winning his Prefinal. On the contrary, the British driver Freddie Slater (Ricky Flynn/Kosmic-Vortex) lost several places early on and did not take part in the duel for the win after being the best in the heats and in the other Prefinal. The Russian Kirill Kutskov (KR Motorsport/KR-Iame) crossed the finish line in second place but a 5s time penalty made him slip down to P7. The second place was therefore inherited by the Pole Gustaw Wisniewski (Sauber/KR-Iame) and the third by the Brazilian Matheus Ferreira (KR Motorsport/KA-Iame) at the end of an excellent recovery race. Slater had to settle for P4 leading two other protagonists: the Japanese Kean Nakamura Berta (Forza Racing/Exprit-TM Racing) and the German Maxim Rehm (Ricky Flynn/Kosmic-Vortex). 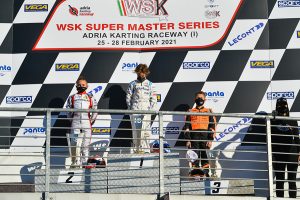 The final of MINI has been exciting from lights to flag as the Dutch René Lammers (Baby Race/Parolin-Iame) and the Pole Jan Przrowsky (AV Racing/Parolin-TM Racing) were very close to each other for the whole 10 laps. In the sprint to the line Lammers managed to be 0.049s clear of the Pole. The third place went to the Russian Gerasim Skulanov (CRG Racing Team/CRG-TM Racing) who recovered well after losing some ground at the start. The Asian Tiziano Monza (Sauber/KR-Iame) led a strong race ending fourth and proceeding in the order Jacopo Martinese (CMT/Parolin-TM Racing), the Belgian Dries Van Langendonck (BirelART Racing/BirelART-TM Racing), Emanuele Olivieri (Formula K Serafini/IPK-TM Racing), the Spanish driver Christian Costoya (Parolin Motorsport/Parolin-TM Racing), the Swiss Kian Fardin (Team Driver/KR-Iame) and the Chinese Zhenrui Chi (Baby Race/Parolin-Iame) who also run a good race recovering a lot of ground.

2021 SKUSA Winter Series Mini Swift champion Matias Orjuela (COL) made his second start in Europe, finishing as the top North American. Racing with Parolin Motorsport began the event 18th after qualifying, placing top-seven in all six of his heat races to end up 13th in points. He would gain one position in Prefinal A to start the Final from row six. Orjuela ran as high as eighth early in the main event until falling back late. He would cross the line in 19th, losing several positions on the final circuit and then more when a pushback bumper penalty classified him in 27th. Canadian Jensen Burnett (Energy Corse) began the event 8th after qualifying. Issues in his second heat cost Burnett valuable points after finishing top-10 in his other five motos. Burnett was classified 32nd in points. Burnett would only complete one lap in the Prefinal B, ending his day early.

A total of six drivers represented North America in the OKJ division with four transferring to the Final. Challenge of the Americas champion Enzo Deligny (FRA) improved his position after qualifying 32nd, moving up to 18th in points after placing top-10 in four of the five heat races. The Parolin Motorsport driver improved one position in Prefinal B to start the main event from row eight. Deligny fell back at the start but fought his way forward to 13th at the checkered to lead the North America contingent. Jamaican Alex Powell (KR Motorsport) was next in the order, placing 20th. Powell was 50th after qualifying and gained eight spots to end 42nd in points. Alex drove his way into the main event, gaining four spots in Prefinal B to start the main event from row 15. He made his way up early on in the race, up to 18th at one point until losing a few spots late.

2021 SKUSA Winter Series X30 Junior champion Kai Sorensen (Parolin Motorsport) had a similar result as Powell. Sorensen was P24 after qualifying, but two finishes outside the top-25 in heat races placed him 40th in the points. Kai improved four positions in Prefinal B to transfer into the Final, starting row 16. Sorensen stayed toward the end of the field, ending up crossing the line in 25th. James Egozi (Tony Kart Racing Team) was the top driver throughout much of the event for North America, qualifying 15th and ending up ninth in points. Egozi improved one position in Prefinal A to start from row four in the Final. A great start put Egozi third after the opening lap. Fighting for position, Egozi was spun around backwards on lap two, forcing him to retire.

Two Americans Xander Reed (KR Motorsport) and Caleb Gafrarar (Leclerc by Lennox Racing) were unable to qualify for the Prefinals, missing out on being inside the top 68 after the heat races. Reed qualified 59th overall, with only two finishes above 20th in the five heat races to finish 71st in points. Gafrarar, making his first start in Europe for 2021, had a similar string of results. He qualified 61st with only two finishes inside the top-20 to end up 88th in points.

2020 FIA European OKJ Champion Ugo Ugochukwu (Sauber Orlen Karting Team) recorded the best finish of the North American contingent on the weekend, placing third in OK. Ugo was fifth after qualifying, placing third in all three heat races to end up fourth in points. He held his second starting position in Prefinal B to start outside row two for the Final. Ugo jumped out to the lead on lap two, showing the way until lap 12. He would slip back to third a lap later, holding the position to the checkered flag for his first podium of 2021.