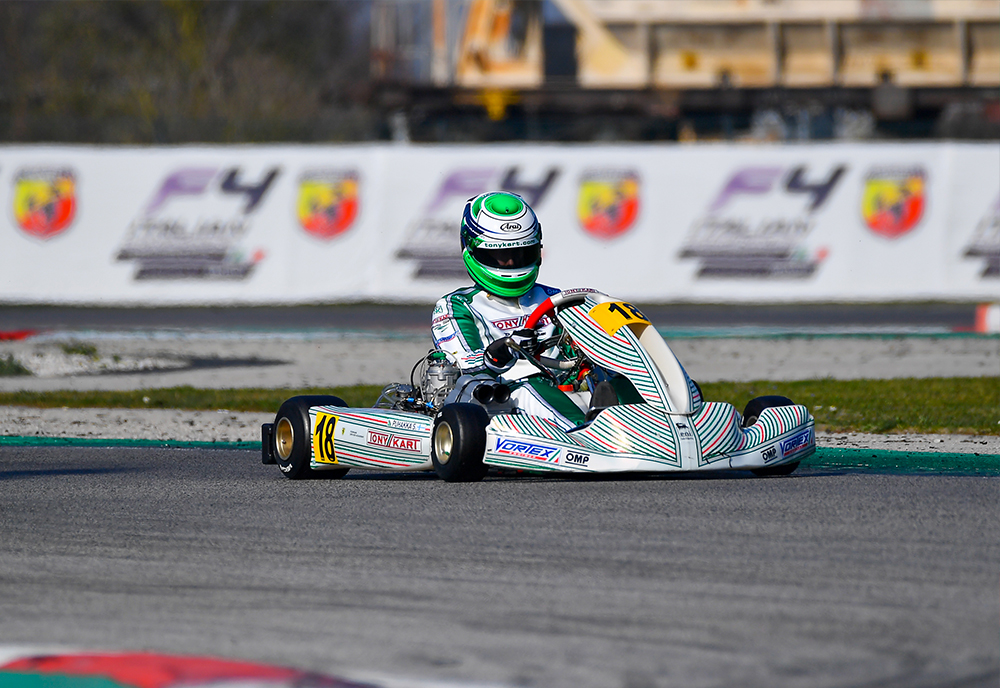 Our Racing Team gets important results in the qualifying and in the heats of the KZ2, OK, OKJ and MINI classes on the occasion of the first round of the WSK Super Master Series, unfortunately lost due to several bad luck events.

After the positive results obtained in the first event of the 2021 season of last week, our Tony Kart Racing is at the start of the WSK Super Master Series, still at the Adria Karting Raceway, with its consolidated technical package: the Tony Kart Racer 401R (for the KZ2, OK and OKJ categories) and the Tony Kart Rookie 2020 (for the MINI), powered by the Vortex engines.

In KZ2 category, Simo Puhakka is the man to beat: the Finnish driver is the champion in force of the WSK Super Master Series. Simo immediately starts on the right foot, setting the second best timing in the qualifying session. In the qualifying heats he gains three victories, three fast laps and a second place giving him the pole position for the pre-final, wisely managed in order to focus all the attention on the decisive final. This solid performance is broken by an accident on the first lap in the final, which forces our driver to stop. So, to defend our Racing Team in the race there is Pedro Hiltbrand, seventeenth position with a +6 despite a track with no room for overtaking. The Spaniard constantly fights for the top five list in the heats.
Gilles Stadsbader performs a comeback of 12 positions at the end of the heats compared to his placement in the qualifying session, with concrete results unfortunately lost due to his stop in the pre-final. Josef Knopp, whose learning curve is constantly positive, is still in a phase of study and adjustment.

After his excellent performance on the occasion of last week’s WSK Champions Cup, Tuukka Taponen enters the weekend by being among the ten fastest drivers of the qualifying session in the OK category, however two unlucky stops in the second heat and in the pre-final do not allow the Finnish driver to let his skills shine. Same destiny for Alfio Spina, who managed to get back to the top ten after the heats but also forced to raise the white flag in the pre-final.

In a difficult weekend, the world champion in force Callum Bradshaw shows all his skills and gains access to the final, climbing a record number of 15 positions from the last row of the starting grid. The same final that saw, however, an accident at the first curve involving an innocent Joseph Turney. A pity for the English driver, who collects a victory in the qualifying heats as a demonstration of his competitiveness.

Despite being a rookie in the OKJ category, James Egozi already proves to be in step with the most experienced drivers. The American driver, with an excellent performance in the heats where he also gains a second place, is constantly among the top ten and, in the final, he starts so strongly that he settles in third place. Unfortunately, due to a collision with another driver, Egozi has to leave his kart at the side of the track and, as a consequence, sees a deserved top result fade away. Harley Keeble, one of the protagonists of the WSK Champions Cup which took place seven days ago in Adria, is also in good shape. The British driver gains five podiums in the five heats and enters the final as one of the favourites: unfortunately, a problem does not allow him to attend the race.

In the MINI class, Jimmy Helias does not get what he wanted. Competing for the podium in the WSK Champions Cup, the very young French driver just misses the top ten in the final. Helias achieves a victory in the second heat of his class, also collecting a fast lap, two third places and two fifth ones.

After two intense weeks of activity in Adria, the Tony Kart Racing Team will be back on track in two weeks, from 11th to 14th March, on the occasion of the second round of the WSK Super Master Series at the International La Conca Circuit.