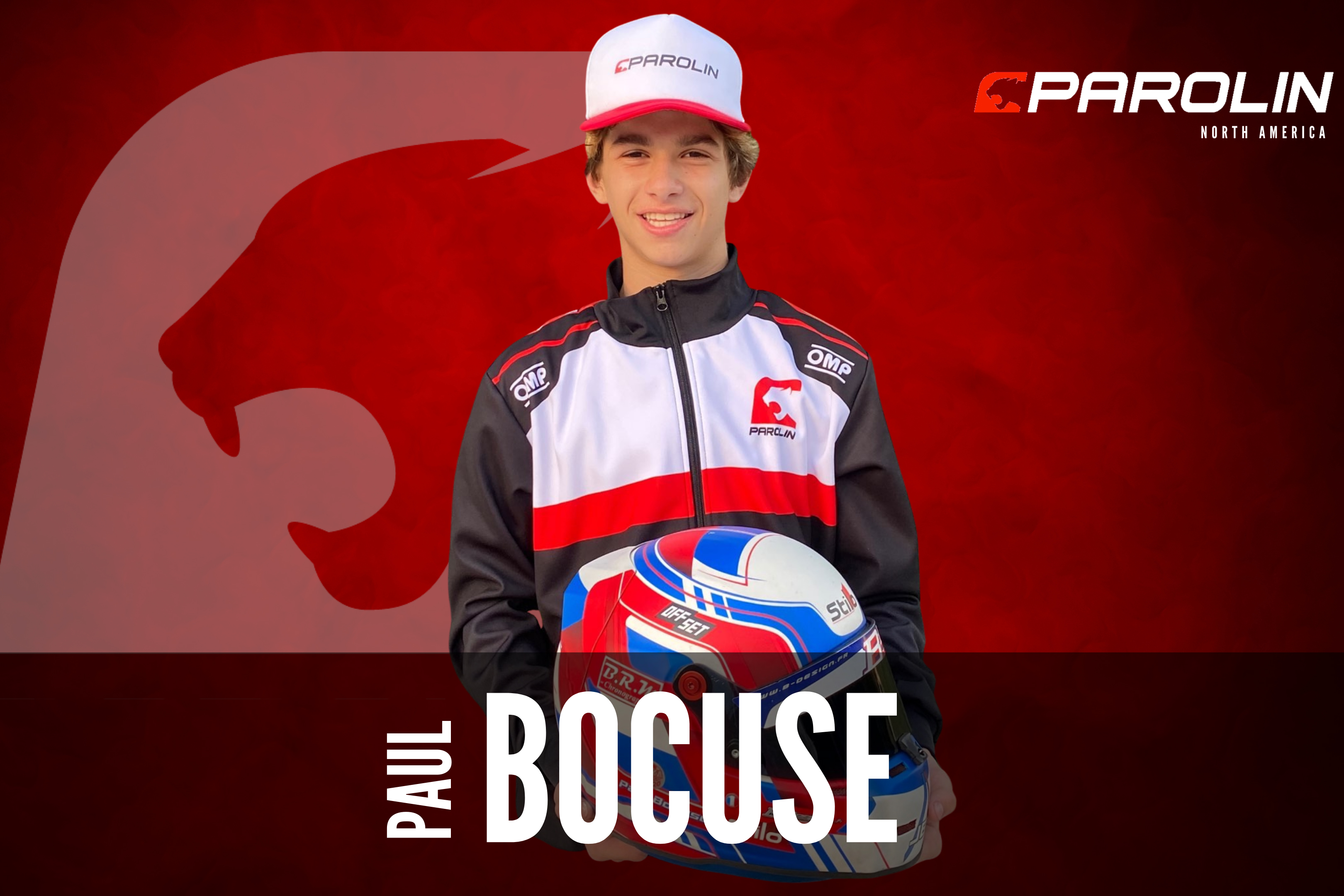 The Parolin USA race team has kicked off the 2021 season with strong race and championship-winning performances during the first two months of the year. Securing two title at the Superkarts! USA Winter Series along with victories and podiums at the ROK Cup USA Florida Winter Tour, the Miami, Florida based operation is set to expand their race team as they head into a busy month of March. The team has strengthened its program even further, having signed Paul Bocuse, one of the top Junior drivers in the United States

Bocuse has been racing karts since the age of seven. The Orlando, Florida student progressed through the Cadet ranks until moving into the Junior categories in 2019. In his rookie season in Junior competition, Bocuse finished fifth in the United States Pro Kart Series X30 Junior championship. Last year, Paul ended the Superkarts! USA Pro Tour in fourth position in X30 Junior. The 13-year-old is coming off a solid opening two months of 2021, winning the final round at the SKUSA Winter Series in Homestead while also claiming two victories at the opening event for the ROK Cup USA Florida Winter Tour at Isle Casino back in January.

“We are excited to have Paul joining the team,” stated Teddy Truchot of Parolin USA. “He is a proven race-winner. His experience and commitment will benefit the entire team, including our youngest drivers inside the Parolin USA tent.”

Bocuse is scheduled to make his Parolin USA debut at the upcoming United States Pro Kart Series event at Ocala Gran Prix on March 12-14. He will then close out the Florida Winter Tour program the following weekend at the same Ocala, Florida facility before traveling to New Orleans for the opening event of the 2021 Superkarts! USA Pro Tour on the March 26-28 weekend at the NOLA Motorsports facility.

“I want to thank the Speed Concepts Racing family for their involvement in developing me into the driver I am today over these past five years. For this, I will always be grateful,” added Bocuse. “Now, I am very excited and appreciative to Marco Parolin and Teddy Truchot for this incredible new opportunity to join Parolin as a Junior factory driver. I am ready to do my best to represent the Parolin brand and its racing team.”

Parolin USA is coming off two championship performance at the SKUSA Winter Series by X30 Junior driver Kai Sorensen and Matias Orjuela in Mini Swift. Sorensen has graduated to the Junior ranks after spending his last Cadet season in Europe racing with the Parolin factory team. Both he and Orjuela are currently competing in Europe at the WSK Promotions program in Italy. Other Parolin USA drivers to find success in Florida this winter include Canadian Jensen Burnett, who placed on the podium twice in Homestead to finish the Mini Swift standings in fourth. Alessandro Truchot led the team in Micro Swift, earning his first podium result of the 2021 season en route to fourth position in the championship chase.

Spots remain on the Parolin USA race team for the remainder of the 2021 season, as the operation will follow the full United States Pro Kart Series, Superkarts! USA Pro Tour, Sunshine State Karting Challenge and special one-off events such as ROK the RIO and Superkarts! USA SuperNationals 24 in Las Vegas.