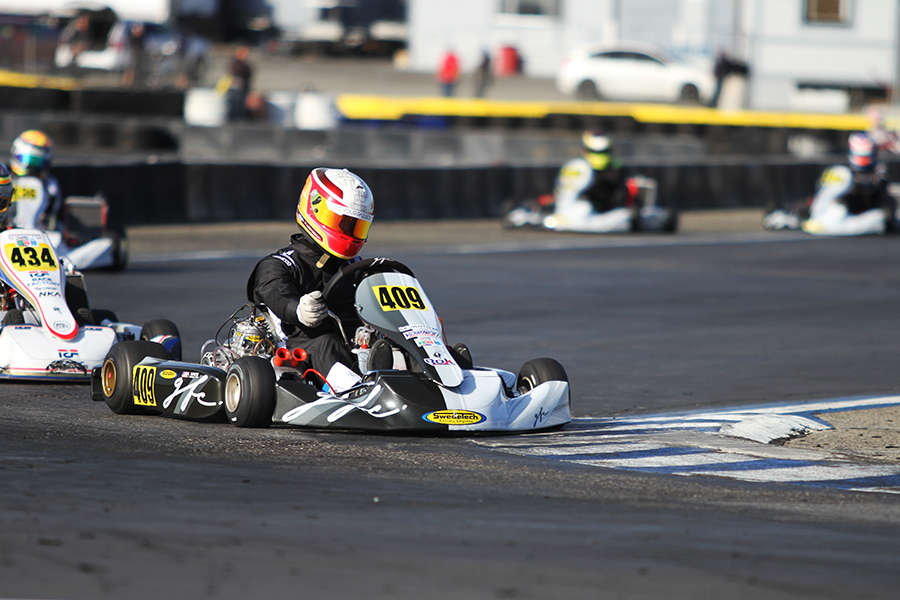 The final day of action was completed Sunday at the CalSpeed Karting facility for Challenge of the Americas presented by Royce & Baxter. The record-breaking event of 147 entries had to battle one of the toughest days of weather in the 14-year history of the event. Wind gusts of up to 60 mph in the Fontana, California area greeted everyone in the morning and last up until the end of the Prefinals before the speed reduced significantly. The strong winds kept the competitors and mechanics on their toes, along with the entire staff with barriers and other items around the facility blowing around. When the final checkered flag waved, Kyle Wick was able to secure his first victory in the Shifter ROK division while ‘The Show’ Jake Drew gave the SoCal drivers a sweep of the main event wins in Senior 100cc.

While a new track record was set by Kyle Wick (GFC) in the Swedetech Shifter ROK qualifying session on Saturday, the winds kept it from being broken on Sunday. Saturday winner Billy Musgrave (MRC / Factory Kart) laid down a 49.824-lap, roughly two tenths slower then the new track record. The start of the Prefinal saw contact between the top two with Musgrave and Wick coming together at the apex of turn one. Musgrave suffered a broken front end while Wick speed through and rejoined the field at turn four. Keawn Tandon (GFC) took advantage and came away as the leader with Wick slotting himself into second. Tandon led the first eight laps until Wick went by, going on to the win with Race Liberante (Race Factory) slipping past Tandon late for second. A clean start to the Final saw Wick get the holeshot with Liberante slotting in behind. Tandon was third until defending champion Hunter Pickett (GFC) took over the spot after four laps. The top three were very even throughout the 18-lap race, with no other changes or battles for position. Wick went on to earn his first race victory with GFC with Liberante getting his first podium in return to the category. Pickett was one spot lower on the podium from Saturday in third. Jacob Gulick and Tandon put four GFC drivers into the top-five. The show to watch was Musgrave coming from the back of the 23-driver field, working his way up to sixth with fast laps of the race at near track record pace but contact with Brenden Ruzbarsky (GFC) late in the race resulted in a 10-second penalty, putting him 14th. 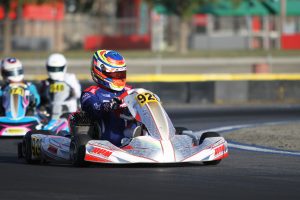 The Forward Direction Motorsports Senior 100cc, featuring 32 drivers, was once again another good show from the front to the back. Round Two winner Liam Letzsch (CBM / EOS) set fast time in the qualifying session but a great battle took place for the Prefinal win. ‘The Shoe’ Jake Drew (RPM / Tony Kart) was able to cross the line first, but was handed a two-position penalty for jumping the start. That gave Alex Siragusa (FW / GFC) the win over Letzsch. Starting third, Drew was quick to get back to the front, taking over the position by the end of lap two. From there, he never put a wheel wrong as Letzsch kept the pressure on the entire 18-lap distance. Drew made it two-for-two in local drivers scoring the wins in the category as Letzsch place runner-up, but first among those in the championship chase. It was one position better than two-time winner Blake Nash (Nash / EOS), who was shuffled back to ninth in the Prefinal. Nash drove himself up to the third spot on the podium with fast laps of the race, ahead of Macy Williams (CBM / EOS) and Dante Yu (PGR / Ricciardo). 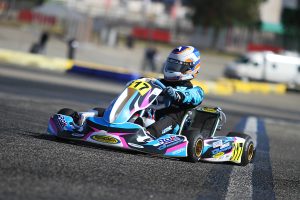 Letzsch did continue his streak in the Ruthless Karting Senior ROK division, earning a fourth victory and third sweep over four rounds thus far. Letzsch led every lap of every session on the day ahead of Christian Bird Motorsports / EOS teammate Macy Williams, who did record fast lap of the race. A good fight for third took place all day with Ryan Vincent (PGR / Ricciardo) edging out Andrew Zimmer (IM USA / Italkart) at the line with Kieran Rogers (IM USA / Italkart) in fifth. 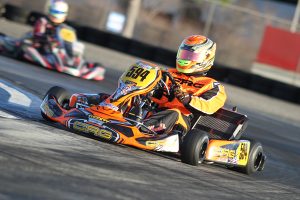 Kevin Woods added a second victory on the weekend to help his run as defending champion in Shifter Masters ROK (Photo: EKN)

A victory sweep at CalSpeed for defending champion Kevin Woods (RWR / CRG) in the Ron White Racing Shifter Masters ROK class. Ryan Yop (Redspeed) came out of qualifying with fast time while Woods was second in the session. Yop led the first four laps until he was shuffled back to seventh. That triggered a great three-lap battle for the lead with Woods taking the position before Round One winner Michael Valiante (IM USA / Italkart) slip past. The following lap, Round Two victor Cliff Kujala (Pure / Tony Kart) grabbed control of the point and got away to cross the line first ahead of Valiante and Woods. Valiante grabbed the holeshot to lead the opening laps of the main event with Woods slotting into the second spot. On lap eight, Woods was able to challenge and take over the lead. From there, Woods never put a wheel wrong and drove away to a 2.7-second victory. Valiante drove to second with Kujala completing the podium. Adam White (GFC) held off Garrett McKelvie (GFC) in what was a great battle for the fourth position throughout the race. 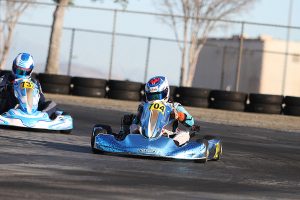 Brett Harrelson was able to complete the task at hand on the day in the M2 Masters 100cc division, and redeem himself from his Saturday mishap. Harrelson was leading Saturday’s main event late when he made enough contact with a barrier out of the hairpin it resulted in his race ending. Sunday, Harrelson came back with the same speed from the day before to set fast time in qualifying and win the Prefinal. In the main event, Timothy Meyer (HRT / EOS) and Saturday winner Carlos Calderon (Aluminos) had the pressure on Harrelson. Meyer never made a move on Harrelson, and Calderon attempted to move past Meyer for the second spot. Their fight gave Harrelson enough breathing room to not put a wheel wrong in the closing laps and secure his first series victory. The P2 fight allowed for Mike Smith (VMI / EOS) to close in, and work past both Calderon and Meyer for the runner-up position on the podium. Calderon ended third, posting fast lap of the race. The battle for fifth went down to the wire with Ian Koentges (FDM / CompKart) earning his best finish of the weekend. 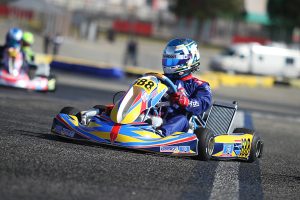 Resuming his winning ways was two-time defending champion Derek Wang (EOS) in the Odenthal Racing Products Masters ROK. After engine failure on Saturday, Wang put on the back-up engine and cleared the field by four tenths in qualifying. He held off a challenge from Timothy Meyer (HRT / EOS) and Adam Kasick (FDM / CompKart) in the Prefinal, but turned up the wick in the Final to lead all 18 laps to a 5.8-second advantage. The battle all race was for second with Meyer earning the position and Saturday winner Billy Cleavelin (RPG / Tony Kart) slipping past Kasick for the third step on the podium. CalSpeed manager Mike Smith (VMI / EOS) finished fifth. 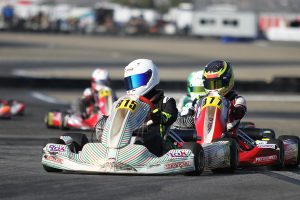 The Italkart Junior 100cc category welcomed its second female winner on the season. The day began with Round One winner Christian Cameron (AKR / Redspeed) setting fast time, edging out Saturday winner Alexander Gonzalez (Nash / EOS). The lead group was more than three drivers all day, up to nearly 11 in the Prefinal all jostling for position. Gonzalez however was able to secure the top spot for much of the race and earn the win ahead of Cooper O’Clair (J3 / CompKart) and Lydia Small (RPM / Tony Kart). Another large group battled at the front all 18 laps of the main event, including a minimum of seven lead changes in the first 13 laps. By that time, Small had secured the lead with Round Two winner Lanie Benjamin (SF / Redspeed) at the front. The two female drivers led the field to the checkered flag as Lydia secured her first series victory. Behind them, contact in Contino Carousel shuffled up the order on the final circuit with O’Clair coming out with the third position ahead of Cameron and Dane Idelson (PGR / Birel ART). Only one driver in the Acceleration Kart Racing Junior ROK category on the day with Tristan Young (VemmeKart) earning the victory. 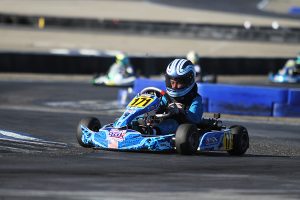 A new winner emerged in the GFC Mini ROK division on the day, with third-generation driver Rocky Moran (RPM / Kart Republic) picking up his first series victory. Moran was able to sweep the action on the day, beginning with fast lap in qualifying. Getting shuffled back to fifth on the opening circuit, Moran slowly worked himself back up to the front by the end of the Prefinal for the win. In the main, it was all Moran who led all 15 laps to earn his first Challenge victory. The battle for second raged on all race long with Gage Korn (Race Factory) crossing the line ahead of Nico Sarphati (GFC), Charlie Smith (Nash / Kart Republic) and Jackson Glendenning (Nash / Kart Republic). Glendenning was handed a two position penalty for jumping the start, that promoted three-time race winner John Antonino (Race Factory) to fifth. Antonino recorded a DNF in the Prefinal with a mechanical issue. He drove from 17th to sixth, only one-second behind the fight for second on the track with fast laps of the race. 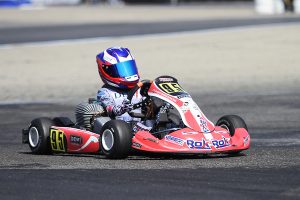 It was a great battle all day long in the Empire Karts Micro ROK class, with nearly the entire field in the lead pack racing for the victory in the Final. Prefinal winner Ashton Woon (Nitro Kart) and Saturday winner Rhys Bowman (FDM / CompKart) continued to swap the lead lap after lap. Top qualifier Jaxon Porter (Ruthless / Nitro Kart) eventually got into the middle along with Troy Ferguson (Benik). Ferguson moved himself up into the lead before Porter took over with a few laps remaining. The race to the checkered flag went to Porter, just ahead of Julian Sanchez (GFC) with Woon in third. Penalties however adjusted the podium results with a three position penalty to Porter for impeding and two positions for contact on Sanchez. That promoted Woon to the top of the podium for his second victory of the season and put Bowman to second. Sanchez was classified third with Porter fourth and Ferguson in fifth. All five drivers finished with one-second at the line.

The middle event for Challenge of the Americas is completed, with only one remaining. Rounds Five and Six are set for March 26-28 at the Sonoma Raceway in Sonoma, California.