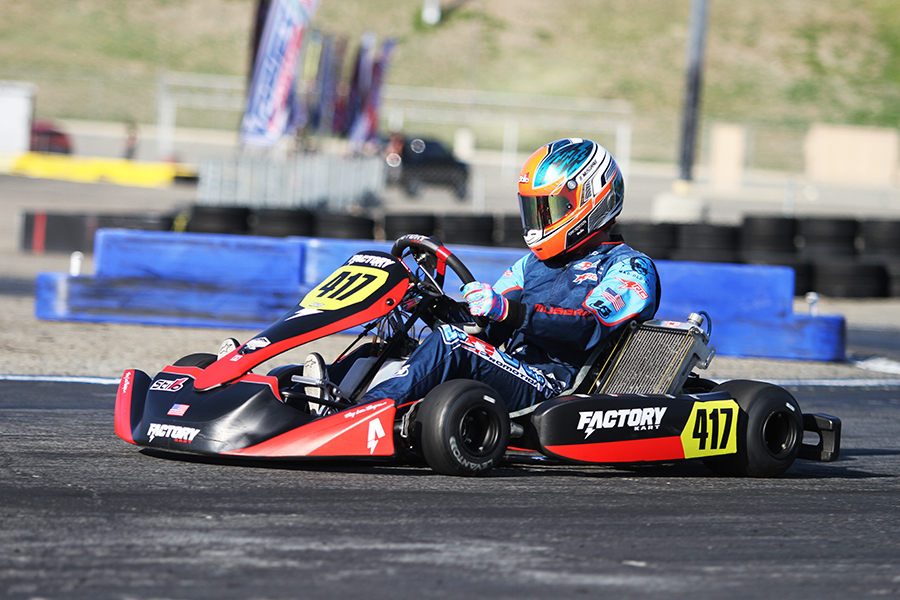 Saturday was the first day of competition for Challenge of the Americas presented by Royce & Baxter at the CalSpeed Karting facility. A record of 147 entries in the 10 categories took to the ‘Grande’ circuit outside the Auto Club Speedway in Fontana, California, setting a new mark for a weekend total in the 14-year history of the program. Bright, sunny skies greeted everyone all day, providing the perfect conditions for racing. Following the action, Blake Nash and Billy Musgrave were among the SoCal drivers to stand on top of the podium at the end of the day with victories. 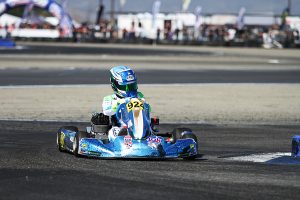 The largest category of the event is Forward Direction Motorsports Senior 100cc, featuring 32 drivers. Round One winner Blake Nash (Nash / EOS) swept the day to put himself back into the championship chase. Nash came out of qualifying with fast time of 53.218, edging out Round Two winner Liam Letzsch (CBM / EOS) by only 49 thousandths. The Senior rookie would then go on to lead all laps of the Prefinal and go wire-to-wire in the 18-lap main event. Nash was trailed early on, until he was able to pull away as they fought for second behind him. Letzsch was joined by Jake Drew (RPM / Tony Kart) and Dante Yu (PGR / Ricciardo) – who posted the fast lap of the race. Their shuffling allowed Karson Porter (Ruthless / Tony Kart) to close in and join the fight. Drew was able to get away with the position as Porter edge out Letzsch and Yu for the final step of the podium. 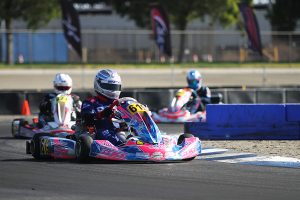 Billy Cleavelin came out as the winner in Masters ROK (Photo: EKN)

A new track record was recorded in the Swedetech Shifter ROK division as Kyle Wick (GFC) posted a 49.601 in qualifying. Wick got the holeshot ahead of Billy Musgrave (MRC / Factory Kart) and led the opening two laps. Musgrave took over the lead and went on to score the win by two seconds. The 18-lap Final was all Musgrave. In his first time racing in the category, the former EKN #1 Shifterkart Driver Rankings sped away with consistent laps, posting his quickest on lap 18, a lap that was only 51 thousandths off his qualifying lap. The race was for second, with Wick slipping back to fourth behind two-time PKRA winner Remo Ruscitti (IM USA / Italkart) and defending champion Hunter Pickett (GFC). Wick was up to third and pressuring Ruscitti when contact was made. Wick fell back to seventh and ended up sixth. Pickett would work past Ruscitti with two laps remaining, earning the runner-up spot. Jacob Gulick placed fourth with Keawn Tandon putting three GFC drivers in the top-five. 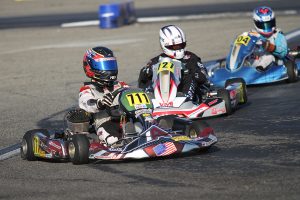 The win streak for Derek Wang ended today in the Odenthal Racing Products Masters ROK. Wang (EOS) set fast time in qualifying and won the Prefinal. He had a solid lead in the Final until lap 13 when he suffered an engine failure. This put the fight for second into a battle for the victory. Adam Kasick (FDM / CompKart) held the position and led one lap until former series champ Billy Cleavelin (RPG / Tony Kart) took over the position. Kasick was unable to return the favor, as Cleavelin drove to the victory. Mike Smith (VMI / EOS) was a close third with Timothy Meyer (HRT / EOS) in fourth. Pat Beckley (GFC) ran solo in fifth.

The M2 Masters 100cc category was a fight nearly to the end. Brett Harrelson (Nash / EOS) set the tone, going P1 in qualifying and winning the Prefinal by a solid margin. In the Final, Harrelson was joined at the front by Carlos Calderon (Aluminos), Mike Smith (VMI / EOS) and Timothy Meyer (HRT / EOS). Harrelson led the opening two laps until Calderon took over. As he led, they shuffled for position behind him. Harrelson was second and had just moved into the lead on lap 15. On the exit of the hairpin, Harrelson made contact with a barrier and spun around. Calderon escaped without getting collected while Smith and Meyer had to make evasive maneuvers to avoid Harrelson. This gave Calderon a big lead in the final few laps for the victory. Smith was able to edge out Meyer for second while also recording the fast lap of the race. Ian Koentges (FDM / CompKart) and Dana Estes (RPM / Tony Kart) completed the top-five. 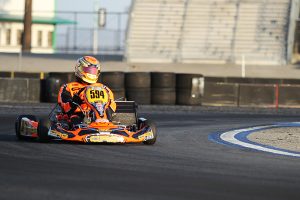 The Ron White Racing Shifter Masters ROK division welcomed a third different winner on the season. Defending champion Kevin Woods (RWR / CRG) was able to sweep the action on the day to claim his first victory of the year. Woods finished at the top of the results in qualifying and the Prefinal, and led all 18 laps of the Final. Round One winner Michael Valiante (IM USA / Italkart) was second to Woods most of the day and in the Final until Round Two winner Cliff Kujala (Pure / Tony Kart) and Ryan Yop (Redspeed) moved past before the end of the main event. Nick Firestone (GFC) rounded out the top-five. 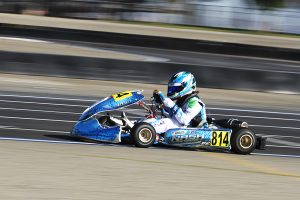 It was another three-driver battle in the Italkart Junior 100cc division, this time with Lanie Benjamin (Speed / Redspeed) joined by Alexander Gonzalez (Nash / EOS) and Lydia Small (RPM / Tony Kart). Gonzalez set fast time in qualifying while Benjamin edge them out for the Prefinal victory. The main event went down to the wire with the trio swapping positions through the final corner. Gonzalez came out of the turn with the lead, earning his first victory in his series debut. Small beat out Round Two winner Benjamin to land two female drivers on the podium. Round One victor Christian Cameron (AKR / Redspeed) drove to fourth with G3 Argyros (Speed / Tony Kart) in fifth. 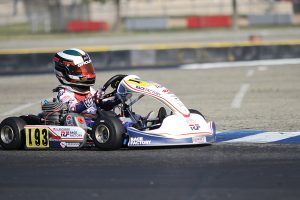 Today was a match of Round One in GFC Mini ROK class. John Antonino (Race Factory) finished first in all three sessions, leading every lap of the Prefinal and Final. While the Prefinal saw a big margin of victory, it was not the same in the Final. Gage Korn (Race Factory), Nico Sarphati (GFC) and Rocky Moran (RPM / Kart Republic) found more speed to put the pressure on Antonino. They kept it on all the way through to the checkered flag. Moran was able to get a run to the checkered flag, but came 13 thousandths short with Antonino earning the victory. Sarphati, in his first Challenge race of 2021, finished third with Korn fourth. Charlie Smith (Nash / Kart Republic) ended up fifth. 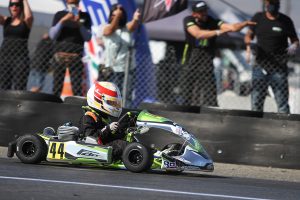 Three rounds, three new winners at the Challenge in the Empire Karts Micro ROK. Contact in the main event on lap four narrowed the field from seven to four with Round One winner Jaxon Porter (Ruthless / Nitro Kart) ahead of Rhys Bowman (FDM / CompKart). Top qualifier Troy Ferguson (Benik) ended the Prefinal in the wall after battling with Porter, and after starting last, was able to run down the top-two. Ferguson was challenging Porter until Bowman picked up the pace. Bowman went from third to first in a couple laps. On the final circuit, the trio jostled around for position and coming out of the final corner, Bowman came out with the lead and the victory. Ferguson ended up second with Porter in third. Braylon Underwood (Race Factory) was the last kart running in fourth with Round Two winner Ashton Woon (Nitro Kart) recorded as the fifth-place finisher.

Sunday brings Round Four and final day of action at the CalSpeed facility for Challenge of the Americas. Tune in to EKN Live all day for live audio and follow updates on the EKN Social Media outlets.