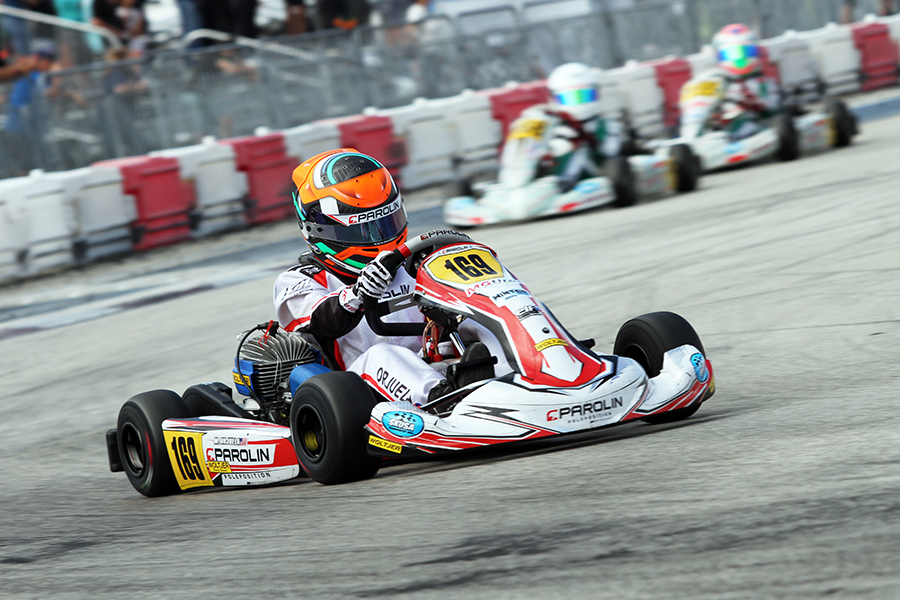 Parolin USA's Matias Orjuela was the Mini Swift driver to beat in the SKUSA Winter Series, taking one of the two champions earned by the brand
(Photo: EKN)

The Parolin name has been involved in karting for decades, producing chassis and components from their headquarters in northeastern Italy. Here in the United States, the brand has been successful at all levels of the sport from Cadet to shifterkart. Parolin was the 2019 SKUSA SuperNationals winner in the KZ category, earned victory and podiums in other divisions, and is widely known from coast-to-coast. Parolin USA began 2020, under the leadership of Teddy Truchot. The early success of the team has come from hard work and determination, beginning the 2021 season with two championships at the Superkarts! USA Winter Series program.

The Parolin chassis has been found toward the front of the Cadet division in SKUSA competition for years. 2021 will be no different with the Opportunity Cadet chassis, as Matias Orjuela has shown its potential by claiming the Mini Swift championship in the Winter Series. Orjuela had a near perfect weekend to begin the series in January at the AMR Homestead-Miami Motorplex presented by MG Tires. The only blemish was missing out on quick time in the Round One qualifying session. Orjuela went on to win the Prefinal and Final to secure the first victory of 2021. The following day was a sweep, placing P1 in qualifying, the Prefinal and the Final despite getting shuffled back early in the main event. That performance, along with a victory at the Florida Winter Tour in Mini ROK at Isle Casino, helped him earn the honor of eKartingNews.com Driver of the Month for January 2021.

Orjuela returned to Homestead the following month, looking to lock up the championship. It began with Matias setting fast time in Round Three qualifying. An issue at the start of the Prefinal dropped him to the tail of the 23-driver field. He fought back to ninth by the checkered flag and improved five positions in the main event to place fourth. The results over the three rounds were enough to secure the class championship, his first career SKUSA title.

After joining the Parolin factory team in the second half of the 2020 season, Kai Sorensen finished his first year competing in Europe with them in the Mini category. His return to the USA for the SKUSA Winter Series marked his Junior debut, ending with his first Junior title. Sorensen set out in the X30 Junior category to contend for the championship. The opening round in January set the stage, with a fast time in qualifying. After placing second in the Prefinal, Sorensen claimed the victory in the main event to begin the title chase on top. 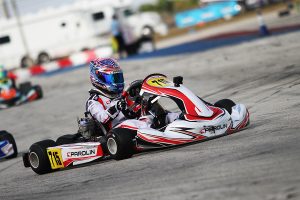 Kai would not relinquish the top spot in the standings over the next three rounds. Sorensen completed the opening weekend with a third-place finish in Round Two. In total, he would drive to four top-four results with three podiums. Sorensen overcame electrical issues in Round Three, driving from the tail of the 22-driver field to end up fourth in the 22-lap main event. Kai recorded the fast lap of the race on his Parolin Le Mans chassis. The finale was all about completing the task of earning the championship, going P1 in qualifying before placing second in the Prefinal and the Final to land himself the title.

Adding to the success at the SKUSA Winter Series for Parolin USA were Jensen Burnett and Alessandro Truchot. Burnett finished third place in two of the four rounds for his best finish of the championship, ending in the fourth position overall in the final standings of Mini Swift. Truchot was among the top drivers over the four rounds in Micro Swift, recording his best finish of third in Round 2 among three consistently-impressive top-five finishes to earn the fourth position in the championship chase.

Orjuela and Sorensen joined the Parolin factory team at the WSK Champions Cup in Italy at the Adria International Raceway just days after being crown champions in Florida. Orjuela was solid in the large Mini field and placed 13th in the competitive division. Sorensen had issues in his qualifying session and was classified 100th. He fought hard through the heat races to transfer into a spot in the Prefinals but fell short of main event grid position.

The two will continue racing in Europe throughout the season and will re-join Parolin USA when they are back in the United States. The race team is gearing up for a busy month of March with three events, including the United States Pro Kart Series (March 12-14) and Florida Winter Tour finale (March 19-21) at Ocala Gran Prix. They’ll then travel to the Superkarts! USA Pro Tour WinterNationals, slated for March 26-28 at NOLA Motorsports in New Orleans.

Head to ParolinUSA.com to learn more about the chassis models available and to see about joining the operation trackside throughout the 2021 season.