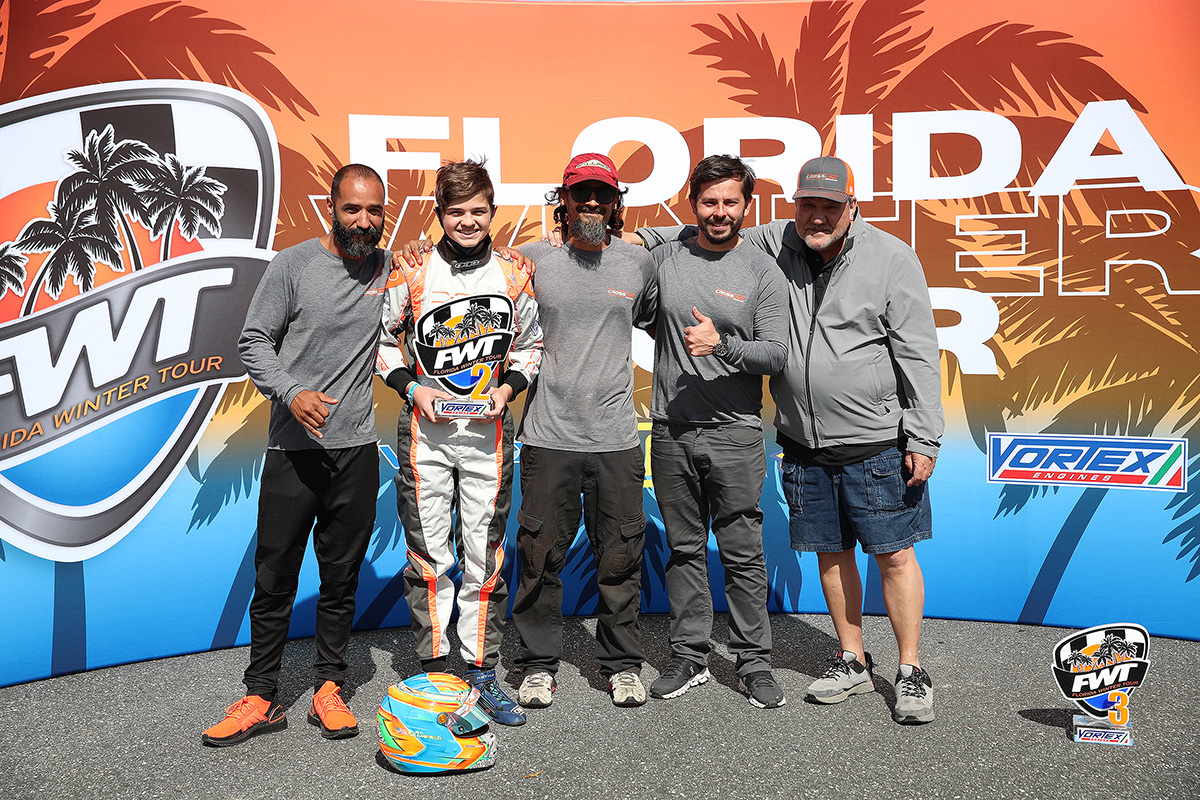 It was a podium winning weekend for Alex Stanfield and Team Crosslink at the second round of the ROK Cup USA Florida Winter Tour. Taking place at the Ocala Gran Prix facility in Ocala, Florida, Stanfield earned a heat race win and a podium result as fellow Team Crosslink drivers Luke Lange, Mario Barrios and Miguel Mier all had front of the field speed but bad luck in some wheel-to-wheel races.

It was Alex Stanfield that led the way for Team Crosslink as he was able to turn his speed in both wet and dry weather sessions into a solid second place result in the Senior ROK main event. After going tenth, third and first in the three heat races, Stanfield was able to drive forward in the prefinal to finish second. Maintaining his outside front row starting position in the main event, Stanfield was able to hold his own and stand on the second step of the podium. Fully engulfed in the championship battle, the Texan will now shift his focus round three.

Stanfield would not be the only Team Crosslink driver at the front of the field as Luke Lange qualified fourth and earned a sixth and a second-place result in heats two and three after a disappointing finish in heat one. Running in the top-five in the prefinal but shoved back to finish ninth, Lange would look for redemption on Sunday. Starting inside the top-ten, Lange was a victim of a first lap incident and relegated back to 18th before one lap was complete. Driving his way back forward, Lange ended his weekend with an 11th place result.

Grace Hemmerde competed in her first Florida Winter Tour event as she battled in the VLR Senior category. Gaining experience with each passing session, Hemmerde consistently improved throughout the heat races finishing sixth, fourth and fifth. Failing to finish the prefinal, Hemmerde was able to return Sunday to earn a fifth-place finish.

In the Master ROK final it was looking good for Team Crosslink drivers Miguel Mier and Mario Barrios as they pushed their way forward. Mier eventually found his way to the third position when the checkered flag flew but a bunch of penalties in the top-five relegated him to fifth. Barrios was the biggest mover of the race advancing forward ten positions before falling to the tail of the results sheet as he failed to complete the final lap.

“It was another strong showing for Team Crosslink, especially for Alex and Luke in Senior,” expressed Sean Owens. “It was disappointing to not be on the podium in Master ROK but our speed was definitely there. On to the next one.”

Next up for Team Crosslink is the Texas Sprint Racing Series event March 18-20 at NOLA Motorsports Park. Stay tuned for more news coming from Team Crosslink in the very near future.