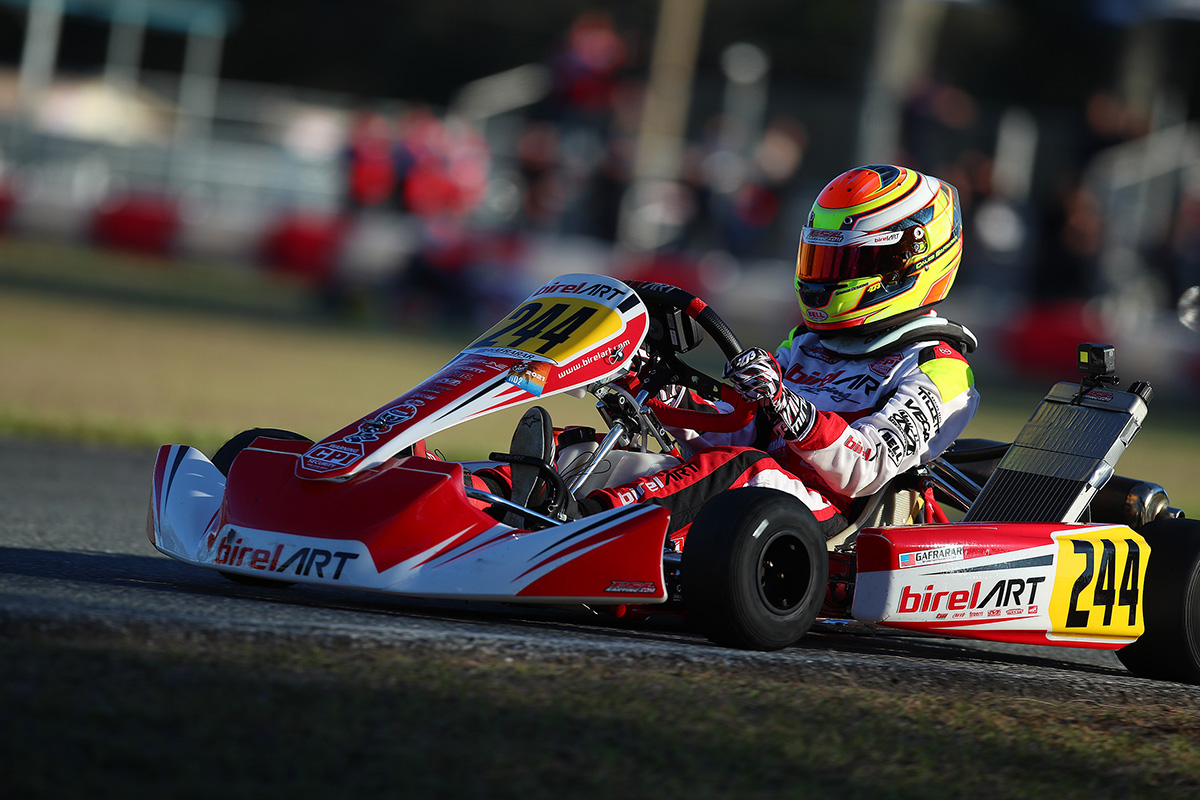 It was a character-building weekend for PSL Karting’s Caleb Gafrarar as he battled not only the Ocala Gran Prix (OGP) facility and Junior ROK field but also the difficult weather that moved through the area on Friday. Taking on the second round of the ROK Cup USA Florida Winter Tour, a rain-soaked qualifying session led to a difficult starting position for all three heat races for the Birel ART driver, but the young-gun soldiered through to earn a top-ten finish at the end of the weekend.

With rain continuing through qualifying and heat one on Friday afternoon, Gafrarar kept his Bridgestone wet weather tires in play as he progressed through the first of three heat races. Looking to move forward from his 22nd place qualifying position, the North Carolina resident did just that advancing seven positions to be classified in the 15th position. Looking for similar progress in heats two and three on Saturday, a day of bad luck saw the Birel ART driver finish 24th and 20th respectively.

Starting from the outside of row ten in the prefinal, the Birel ART / PSL Karting driver drove from 20th to 15th as he looked to build some momentum heading into Sunday. Advancing forward five positions and showing top-fifteen speed, Gafrarar would shift his focus to Sunday and the chance to move forward.

“It was a difficult weekend with changing conditions,” explained Gafrarar. “As a rookie in the Junior category and with the amount of rain we received on Friday, it was difficult to get up to speed. I need to thank Luke Varley for all the help and support over the weekend as he pushed me to get better and never give up.”

Sunday would prove to be better for Gafrarar. As he took the green flag for the main event from inside row eight, he quickly moved forward three positions to run in P12. Competing in one of the toughest divisions in karting, the PSL Karting standout and 2020 Florida Winter Tour Mini ROK Champion never gave up, battling his way inside the top-ten to earn a ninth-place result.

Gafrarar, “If you would have asked me on Saturday afternoon if I would be in the top-ten on Sunday, I am not sure how I would have answered. I never gave up all weekend and thank the team for being on my side and pushing me to be better. To finish ninth at the end of Sunday feels like a win, and I am already itching for the next one.”

Jet setting his way around the world, Caleb Gafrarar is ready for a busy March. After competing in the WSK Super Master Series this coming weekend at the Adria International Raceway, Gafrarar will take part in a March 5-6 test at La Conca with Lennox Racing Team. Gafrarar will compete in the WSK Master Series event at the same facility a week later. A quick turnaround will see him back to Ocala, Florida and the final round of the Florida Winter Tour before the opening round of the Superkarts! USA Pro Tour during the final weekend of March.