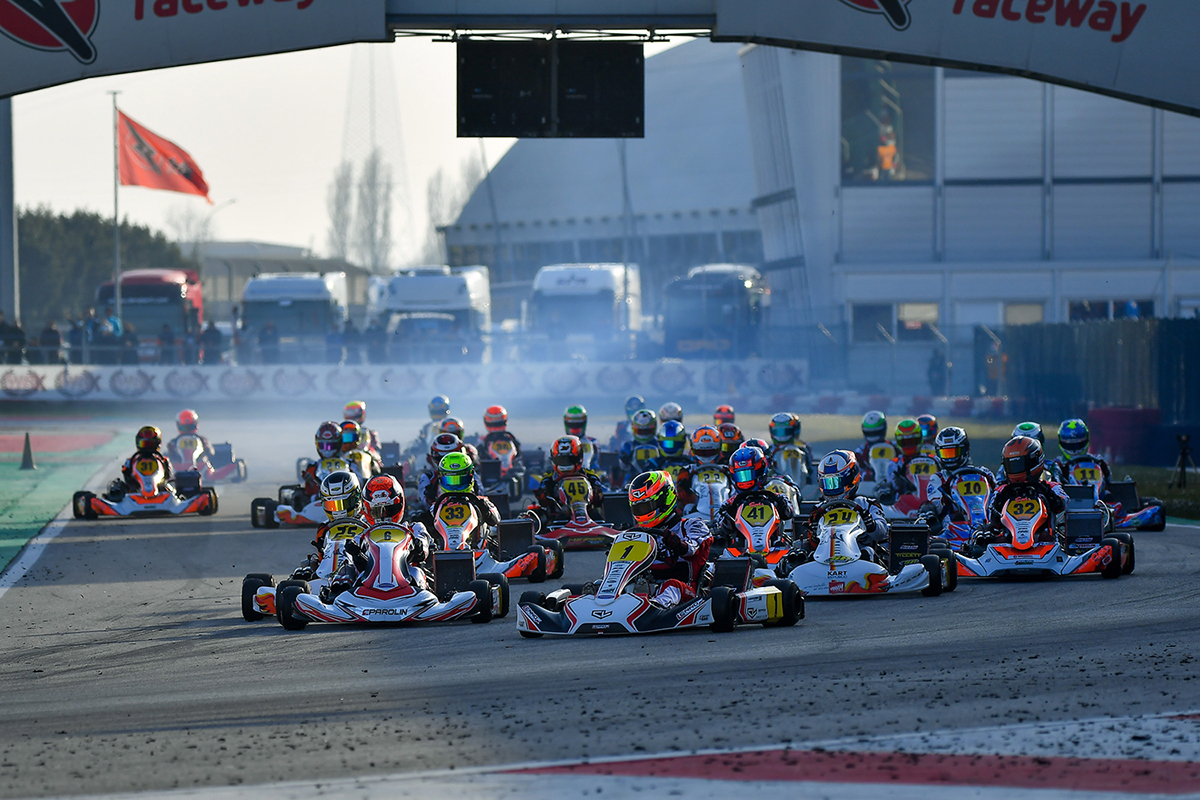 The opening meeting of the international karting season in occasion of the WSK Champions Cup in Adria has been highly successful and 337 drivers from 51 countries challenged each other in the four entitled categories KZ2, OK, OK-Junior and MINI.

The four finals awarded the first four WSK titles of 2021 at the end of an intense weekend that included 52 heats and 8 Prefinals, that is two for each category. The victory eventually went to the Swede Viktor Gustavsson (Leclerc by Lennox/BirelArt-TM Racing) in KZ2, the Brazilian Rafael Camara (KR Motorsport/KR-Iame) in OK, United Arab Emirates’ Rashid Al Dhaheri (Parolin Motorsport/Parolin-TM Racing) in OK-Junior and to the Dutch René Lammers (Baby Race/Parolin-Iame) in MINI. 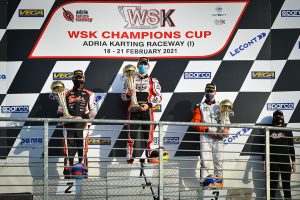 The KZ2 final saw the Swede Viktor Gustavsson (Leclerc by Lennox/BirelArt-TM Racing), who had previously won Prefinal-A, installing himself on top and keeping the lead until the chequered flag. He was initially followed by Prefinal-B winner Francesco Celenta (Parolin Motorsport/Parolin-TM Racing), but the latter had to concede P2 to the French Adrien Renaudin (Sodikart/Sodi-TM Racing) half-way into the race and shortly after the third to the Finn Juho Valtanen (KR Motorsport/KR-TM Racing). The podium positions did not change in the closing laps and Gustavsson crossed the finish line on top, leading Renaudin and Valtanen, while Celenta was fourth and led the Spanish driver Pedro Hiltbrand (Tony Kart Racing Team/Tony Kart-Vortex) and his teammate from Finland  Simo Puhakka. 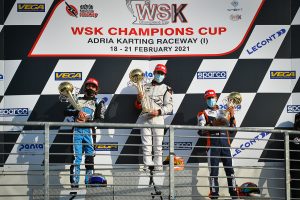 Camara wins the duel with Antonelli in OK

A good performance in OK was put in by the Brazilian Rafael Camara (KR Motorsport/KR-Iame), who run a solid race and then won the final duel with his teammate Andrea Kimi Antonelli. The latter won Prefinal-A and took the lead of the Final but then lost it when four laps were remaining. The third place went to his teammate Arvid Lindblad, who proceeded the Finn Tuukka Taponen (Tony Kart Racing Team/Tony Kart-Vortex), the Russian Artem Severiukhin (Ward Racing/Tony Kart-Vortex) and Prefinal-B winner from America Ugo Ugochukwu (Sauber/KR-Iame). 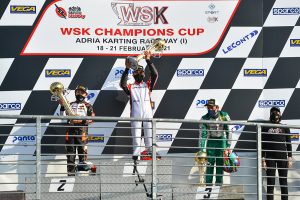 In OKJ the driver from United Arab Emirates Rashid Al Dhaheri (Parolin Motorsport/Parolin-TM Racing) led the race from lights to flag. He won the WSK Champions Cup in MINI last year and switched to the higher category this year.  Al Dhaheri displayed a great shape again and won also the Prefinal in this occasion. The Japanese Kean Nakamura Berta (Forza Racing/Exprit-TM Racing) secured a solid P2 at his debut in OKJ, while the other protagonist of the category, the Brit Harley Keeble (Tony Kart Racing Team/Tony Kart-Vortex) won Prefinal-B and then bounced back from a difficult start recovering several places and climbing up to the final P3. The Russian Maksimilian Popov (Ward Racing/Tony Kart-Vortex) was fourth and led the other two Russians Maksim Orlov (Parolin Motorsport/Parolin-TM Racing) and Dmitry Matveev (KR Motorsport/KR-Iame). 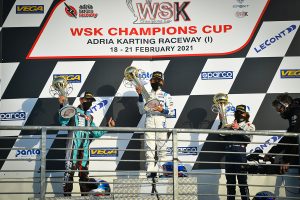 Lammers takes the win in MINI

After an initial duel, the Dutch Renè Lammers (Baby Race/Parolin-Iame) took the lead of the final after winning Prefinal-A and kept it until the chequered flag. He was trailed by Emanuele Olivieri (Formula K Serafini/IPK-TM Racing) who crossed the finish line in P2. The third place went to the Asian Tiziano Monza (Sauber/KR-Iame), who led the pack in the first two laps but then slipped down a bit. He eventually recovered some ground and in the last lap he had the best of the Spanish driver Christian Costoya (Parolin Motorsport/TM Racing). The Pole Jan Przyrowsky (AV Racing/Parolin-TM Racing) won Prefinal-B and then ended his effort in fifth place leading the Belgian Dries Van Langendonk (BirelArt Racing/BirelArt-TM Racing). 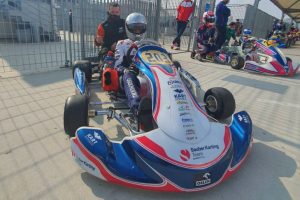 Eight drivers from North America competed at the WSK Champions Cup event across three categories. Ugo Ugochukwu (USA) was the lone driver in OK, driving for Sauber Orlen Karting Team (Kart Republic/IAME). Ugo qualified ninth and improved his position over the four heat races, winning one to sit sixth in points. He improved two spots to win Prefinal B to start on the front row for the 20-lap main event. Ugo was in the fight all race long, up to second at one point but was shuffled back to sixth at the checkered flag. 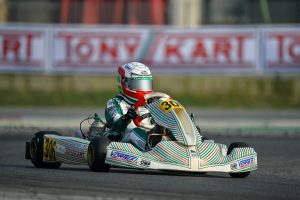 A total of three drivers made the main event in the OKJ, led by James Egozi. The Tony Kart Racing Team (Tony Kart/Vortex) driver was 32nd after the heat races with a best finish of eighth. He improved nine position in Prefinal B to start the main event from outside row seven. After falling back early, Egozi worked his way up to the 10th position. One spot behind was two-time Challenge of the Americas champion Enzo Deligny of Parolin Motorsport (Parolin/TM). Deligny, racing under the French flag, was 13th after the heat races, falling just one spot from his 12th qualifying position. He fell back early in Prefinal A, but ended up 10th. A great start put him forward early and racing just outside the top-10. Jamaican Alex Powell of KR Motorsport (Kart Republic/IAME) made it three North America drivers inside the top-15. Powell qualified 13th and went out winning his opening heat race. A DNF in the second cost him valuable points as he followed it with runner-up results over the next three. That put him 18th in the points, gaining three more spots in the Prefinal B to start the Final from outside row six. Holding his starting position, Powell fell back late to end up 14th.

Xander Reed of KR Motorsport (Kart Republic/IAME) and Kai Sorensen racing under the Parolin Motorsport (Parolin/TM) operation missed the main event in OKJ. Reed was 58th after qualifying and 63rd following the heat races with a best result of 20th. Improving 10 spots in Prefinal A, Reed came five spots short of transferring to the main event. Sorensen was behind early, unable to record a qualifying lap. He survived the heat races to earn the last spot in Prefinal B. His race ended after four laps. 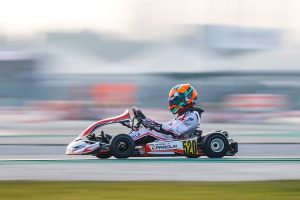 Newly crowned Superkarts! USA Winter Series champion Matias Orjuela jumped on a plane after racing in Miami to join Parolin Motorsport (Parolin/TM) in Italy. Orjuela (COL) qualified 31st but worked his way forward in the six heat races, placing inside the top-10 in five of them. That put him 16th in the points, starting Prefinal B in eighth. He would lose two spots to start the main event from row 10. He moved forward until the final two laps of the race, dropping back to 16th but gaining three spots on the final circuit to end up 13th. Canadian Jensen Burnett did the same, flying from Miami to Italy to join Energy Corse (Energy/TM). Burnett was behind early, qualifying 90th overall. Solid heat race results moved him up to 47th to start the Prefinal A from Row 12. Burnett fought forward in the 10 laps, placing 19th and two spots short of a spot in the main event.